In an effort to combat the scorching heatwave sweeping the Delaware Valley, the Eagles moved practice Tuesday up an hour. Although the session fell under the team’s “yellow” distinction, it lasted just over 90 minutes.

Ahead of Friday’s preseason opener against the Jets, the Eagles not only contended with each other but also with the unrelenting sun radiating over the NovaCare Complex.

On Tuesday, there wasn’t exactly an emphasis on Jalen Hurts and the Eagles’ passing offense, as the running game took center stage, but there was still plenty to consider. 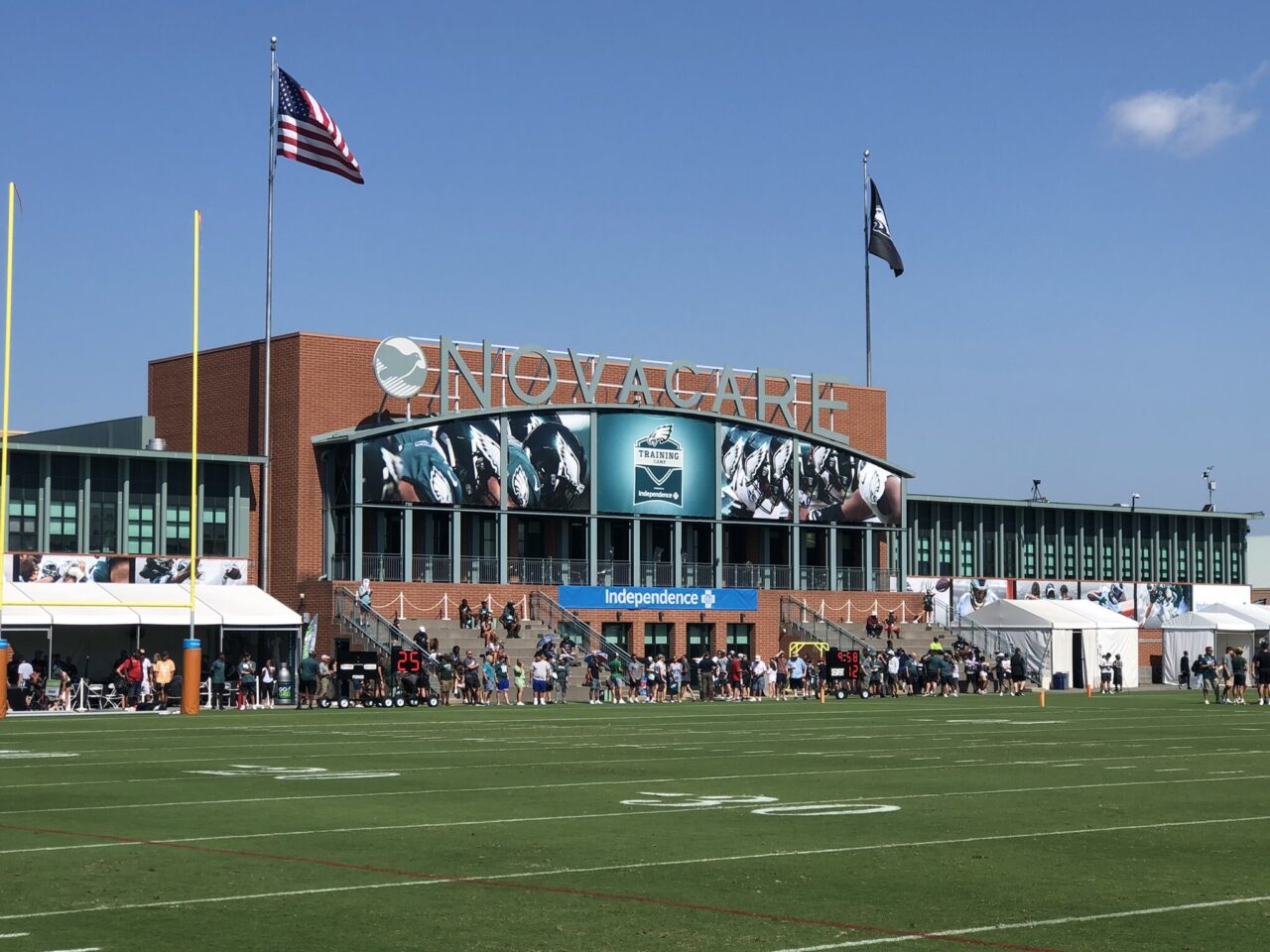 ITB photo: The Eagles continued camp practice as they prepare for Friday’s preseason opener vs. the Jets.

Center Jason Kelce was held out of Tuesday’s practice for what the team deemed a “routine cleanout” surgery on his elbow.

By addressing it now, the belief is that it won’t linger nor affect Kelce’s status for the season opener in Detroit on Sept. 11.

As for Covey, though initially cautiously optimistic, I can see why head coach Nick Sirianni was quick to heap praise on the undrafted rookie. Covey’s short-area quickness, vision, and fluid change of direction would add a completely different dynamic to an underwhelming return game.

As a receiver, he reminds me a bit of Danny Amendola. Very interested early if he sees the field on offense on Friday.

Whatever you’re predicting A.J. Brown’s target totals to be this season, take the over.

Hurts has peppered his best friend with targets throughout camp, and that continued for another practice. The rapport and comfortability are evident.

Brown appeared to secure a pass on the left sideline at one point, with James Bradberry in coverage, but Bradberry got his hand in at the last moment to dislodge it, rendering it incomplete.

Devon Allen struggled with physicality. In one particular 1-on-1 rep, there was a ton of hand fighting between Allen and cornerback Mac McCain downfield, and Allen appeared overmatched.

Jalen Reagor beat cornerback Zech McPhearson over the top for a nice completion. Reagor was also the target of Hurts’ first pass attempt during the team period. The third-year quarterback rolled left and found his intended receiver. I’m not sure how Reagor fits into the equation, but he was consistent this practice.

In spite of missing the early portion of training camp practices with food poisoning, Zach Pascal stood out. In one of his 1-on-1 reps, he won with a nifty outside release against Mac McCain, beating the cornerback over the top.

Later, Pascal put a nice inside move on undrafted cornerback Mario Goodrich for an easy reception. In 7-on-7s, Pascal reeled in a one-handed catch in stride over the middle in with T.J. Edwards trailing.

Third-year quarterback Reid Sinnett is making a push for a roster spot. Sinnett is comfortably ahead of undrafted rookie Carson Strong in the race for No. 3 quarterback.

Sinnett, who hadn’t started until his final season at San Diego – where he threw for 3,528 yards, 32 touchdowns and 10 interceptions – is a classic case of a young quarterback developing and finding his stride through increased reps. If he’s able to translate his camp success, Sinnett could figure into the team’s long-term plans.

He demonstrated a quick release on an intermediary completion to Devon Allen.

While not quite as dramatic as the playoff game against the Vikings – where a front-flipping L.J. Smith lost the football en route to the pylon, which then landed into the waiting arms of wide receiver Freddie Mitchell for a touchdown – Hurts appeared to connect with Brown late, only to have the pass deflected into the air and corralled by tight end Dallas Goedert.

Although the Eagles did everything they could last summer to keep G/T Kayode Awosika in house on the practice squad to nurture his development, I had him making the 53-man roster.  Given Awosika’s versatility and potential upside, he could prove to be too valuable to part with on cutdown day this time around. Keep an eye on the former Buffalo standout throughout the preseason.

Though the numbers aren’t in his favor, I’m interested to see what RB Jason Huntley does with his opportunities this preseason. He’s looked good for the second straight camp and provides added value as a kick returner – but can the Eagles afford to roster four running backs?

Marcus Epps and Anthony Harris shouldered the load at safety with Tartt out, but I thought it was notable that undrafted rookie Reed Blankenship garnered a handful of second-team looks. Likely destined for the practice squad, but it caught my attention.

It’s hard to believe that Brandon Graham is returning from an Achilles injury, which limited him to just two games last season. In one particular sequence, the 34-year-old worked through a Zach Pascal block to stop Miles Sanders for a loss and followed it up with a “sack” on Hurts.

James Bradberry is a physically imposing boundary bully.  He used his length and play-strength to his advantage on multiple occasions.

Former Alabama cornerback turned undrafted longshot Josh Jobe has emerged of late and was active again. He stripped tight end Richard Rodgers from behind on a completion on the right side of the field. Keep an eye on Jobe throughout the preseason slate.

He’s gotten lost in the shuffle a bit with the additions of Kyzir White and Nakobe Dean, but Davion Taylor had a strong showing. In the early portion of team drills, Taylor closed quickly to break up a pass intended for A.J. Brown and later secured an interception off a K’Von Wallace deflection in 7-on-7s, off the arm of quarterback Gardner Minshew.

Quickly on Minshew: his next snap in 7s didn’t fare much better – though he wasn’t at fault. His next attempt bounced off the hands of his intended receiver, Quez Watkins, and into the waiting arms of cornerback Josiah Scott, who’s making a strong push.

Kyzir White is incredibly instinctive and swarms to the football. Wouldn’t surprise me if he leads the Eagles in tackles this season.

Tuesday was Jordan Davis’ turn to carry out his rookie duties, which came in the form of delivering Rita’s Water Ice to his linemates.