With training camp in full swing and Friday’s preseason opener inching closer, the Philadelphia Eagles are learning which players they’ll be able to count on during the 2022 season.

On the latest edition of the Inside The Birds podcast, Adam Caplan and Geoff Mosher provided mid-camp updates and shared all their intel on player performance. 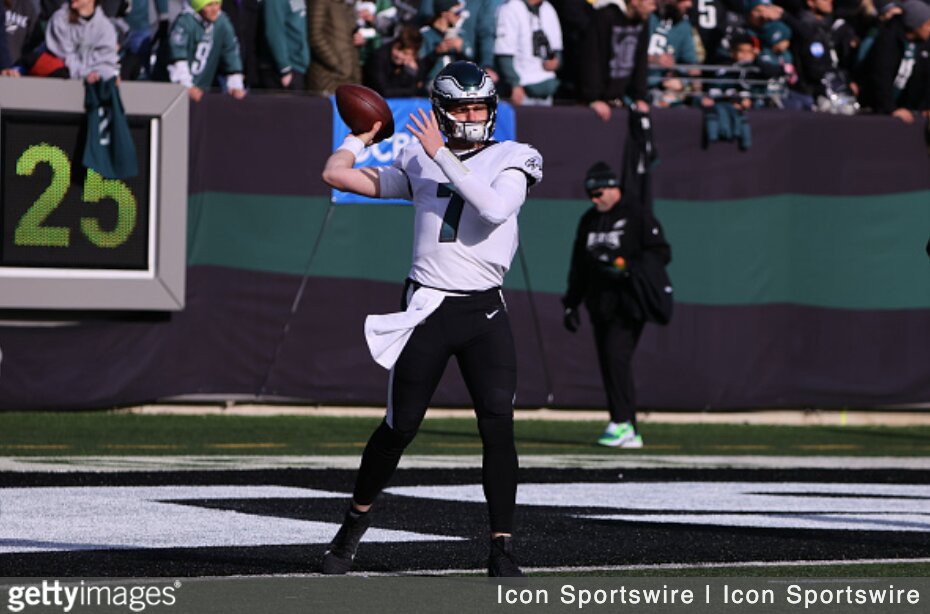 Reid Sinnett has impressed this camp and is pushing to make the team.

Geoff Mosher: “From what we’ve been told, while he’s improved in some areas it’s still overall kind of uneven. There are some good days, there are some days where they wish he would do a little bit better. I don’t want to call it the nature of the position, but it’s sort of what they’ve got right now with Jalen Hurts.”

Adam Caplan: “Here’s where we’re told: Hurts has improved. His progression reading from one to two is much better than it was. He’s not bailing, very little if at all. He’s trusting his eyes more. I know he’s been inconsistent. His last three or four practices you started to see some improvement.”

Mosher: “Reid Sinnett is a guy who’s opening up some eyes in camp. Interestingly, he got second-team reps the other night at the Linc practice. He showcases a strong arm. We’re told that the coaches like the way he comes to work every day. They think he’s great in the classroom, good leadership.”

Caplan: “Remember now,  [Gardner] Minshew’s on the last year of his rookie deal. He’s had an up and down camp and Carson Strong’s really not ready. This preseason could be fascinating for Sinnett to make a push. I know they probably only want to keep two quarterbacks and keep one on the practice squad, but this Sinnett kid may upset.”

Caplan: “The first three or four days quiet, this past week terrific. Short-area quickness is phenomenal…In OTAs, from what we heard, he was wowing them, and now he’s ratcheting it up and also on special teams, he’s got that great 10-to-12-yard burst. I’m still going to with what I said back in OTAs, I believe he’s going to be the punt returner. I know it’s got to play itself out, but they’re very happy with him.”

Mosher: “This is not a challenge. This is not a race. This [starting right guard] is Isaac Seumalo’s job and Jack Driscoll’s a nice backup, swing tackle-guard. Seumalo’s had a great camp from what we’ve heard.”

Mosher: “We’re told Cam Jurgens has surprised them in camp. They already knew he’s a good athlete, that part is not surprising. That was one of the big reasons he was a second-round pick. He had an opportunity to get into the first-team offense at center early when Jason Kelce was out progressing with Covid, and I was told he did an excellent job of mastering the mental part of that position.”

Caplan: “He’s been one of the stories in camp, there’s no question about it. I know the reporters who were there talked about him playing free safety and it’s definitely true. This is the way it was explained to me: your fifth corner cannot just be special teams and you really don’t want him just to be an inside or outside corner, you’d like him to be both…I want to see what happens when he gets in the preseason games and joint practices.”

Mosher: “I think you hit the nail on the head with Josiah Scott as far as what they see, which is the versatility to be able to do more than one thing. He can move around, play slot, play third safety.”

Mosher: “TJ Edwards has had a really good camp. If you go back and look at what they got when they signed him a couple of years ago as an undrafted free agent, he was a downhill linebacker, not the greatest athlete, good intelligence, thought that he would help in run defense. From my understanding, he has really advanced in the intellectual side of the game. He’s very smart and understands where to be at all times. It makes it difficult to take him off the field.”

Caplan: “Apparently he’s been one of the best coverage linebackers in training camp, which I never would have believed.”

Caplan: “The way we heard it is he looks energized. Maybe it’s because (Jonathan) Gannon’s moving him around, but he’s obviously happy to be back.”