Minor tweaks and adjustments by the Eagles and their coaches led to a major turnaround Sunday, as Nick Sirianni’s team not only snapped its two-game losing streak in a 44-6 road blowout of the Lions at Ford Field but also put forth its most dominant effort of the season on both sides of scrimmage.

Amazingly, the Eagles ran the ball 46 times for 236 yards and limited the Lions to just 228 total yards, one of the more lopsided and one-dimensional games you’ll see.

Sirianni and Eagles defensive coordinator Jonathan Gannon came under intense criticism last week after both coaches were embarrassed by the Raiders in a 33-22 loss.

Change had to happen, for Sirianni and for the embattled Gannon. 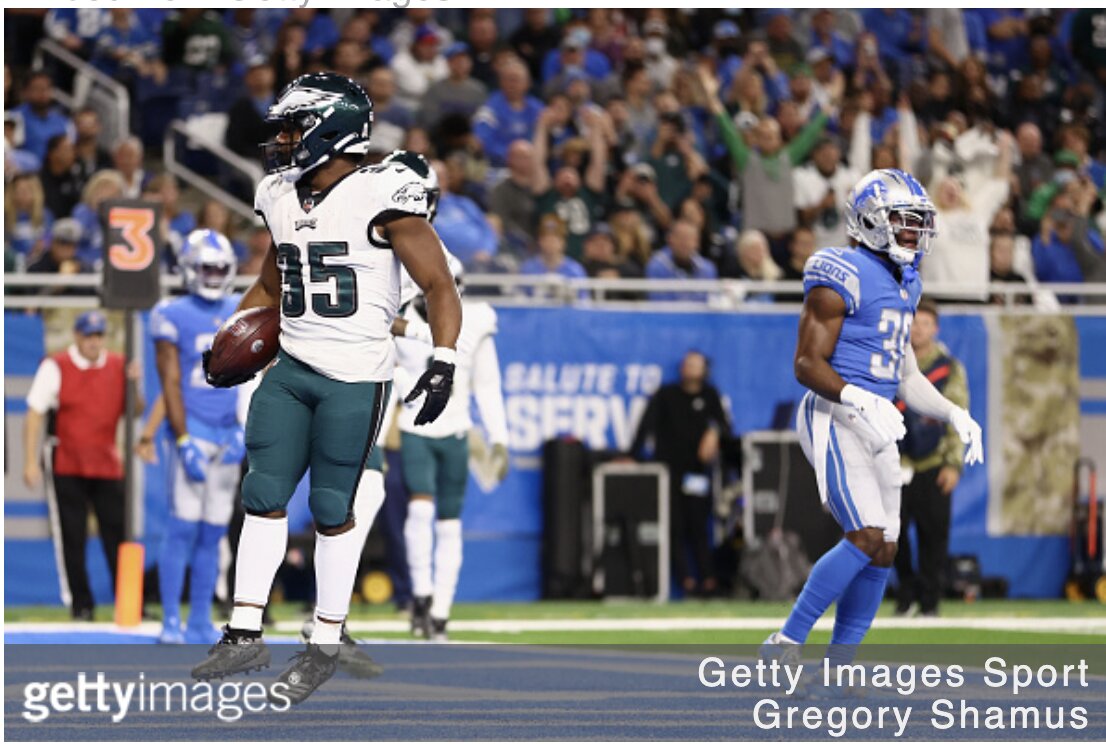 Let’s take a look at some of the adjustments and wrinkles that paid dividend for the team:

1. Let’s start with defense. I said on last week’s game preview ITB pod that I’d be stunned if defensive coordinator Jonathan Gannon made zero changes and did the exact same thing from the first seven games. I was correct. The biggest change was at linebacker, where he stopped trying to play five or six different combinations. Eric Wilson was benched and inactive, and deservedly so. T.J. Edwards was the starter in base and nickel, playing the most snaps, more than 60 percent. His tackling was tremendous. He’s exactly what the Eagles needed to prevent the Lions from becoming the latest team to gash them against the run. Edwards just has really good instincts and understands where he’s supposed to be in zone coverage, but more importantly, he’s so much more of a sound tackler than Wilson or anybody else that he warranted the increased usage. Davion Taylor was mostly the other linebacker in nickel except for the two-minute drill at the end of the first half and other obvious pass downs, when Alex Singleton replaced Taylor. Singleton has a better idea of where to be in zone, so it made sense to have him in specific nickel situations. Singleton was the dime linebacker in the few dime looks Gannon showed. On those plays, Singleton blitzed the gaps as a fifth rusher, which leads to the next point…

2. Gannon blitzed more than usual, which is another obvious adjustment. This change was probably based more on matchup than correcting past mistakes. Jared Goff historically struggles against the blitz, and did again, so the extra pressure from Singleton or Genard Avery helped rattle Goff and either force him into errant hurried throws or put the Lions quarterback on his rear end. Will this continue? I have my doubts. I would think the new linebacker roles are more indicative of a permanent change than the pressure packages, but we’ll see.

3. Gannon again mixed Cover 1 and Cover 2 looks, which continued a recent trend of not strictly playing Cover 2. He definitely brought a safety into the box on some obvious run downs, which helped limit Detroit’s running game. Marcus Epps came from a deep position to shoot the A gap and drop DeAndre Swift near the line of scrimmage earlier in the game. Rodney McLeod also came down from deep to aid in run defense and in coverage across the middle. I still think the move to Edwards more was more responsible for the improved overall run defense – coupled with the Lions being undermanned on the offensive line and without Jamaal Williams – but Gannon definitely made sure to diversify his back-end looks and avoid becoming stale.

4. Ryan Kerrigan showed up. It was probably lost amid the 38-point win and an overall dominant effort on both sides, but Kerrigan showed at least three speed-to-power rushes from a stand-up position over right tackle that collapsed the pocket and disrupted the Detroit offense. Some might say it’s about time that Gannon used Kerrigan correctly but remember, there haven’t been very many third-and-long scenarios for Eagles opponents lately. Run defense and pass rush go hand-in-hand. Being better on first and second down set up the pass rush to be more impactful on third down for the first time a while. Again, you can only hope it translates next week and beyond.

5. Other defensive linemen who excelled were Josh Sweat and Milton Williams. Sweat showed burst over right tackle and Williams generated push and penetration on the inside. Williams really stood out against the run and pass. Would be nice to see if that can continue because he’s not really been a factor much this season. The Lions faced 14 third downs and attempted five more fourth downs, which means the Eagles did their job of keeping Detroit from getting ahead of the sticks. When that happens, this pass rush can tee off. It just hasn’t happened enough over the first eight weeks.

6. Fletcher Cox curiously took himself out on the second snap of the game and didn’t return until the next series. Cox had a few good rushes but overall was just OK. Interestingly enough, he made a good tackle on a slow-developing screen that resulted in the running back catching the ball right next to Cox, who made the tackle. So the guy who doesn’t get “paid to play screens” defended that screen.

7. Offensively, it’s fairly obvious the Eagles went into the game intent on generating a downhill offense and seeing how far the run game could take them. It took them as far as they wanted to go. The surprise wasn’t that they came out with two-tight end formations and Jalen Hurts under center – they did that against the Raiders – but more so how effectively they continued to run the ball as the game progressed. The Lions stacked the box and made adjustments in attempt to be more stout against the run, but the Eagles still bulldozed them. The interior line, especially left guard Landon Dickerson and right guard Nate Herbig, dominated the trenches, paving the way for Boston Scott and Jordan Howard to move the chains. Jordan Mailata and Lane Johnson were excellent at moving defenders as well.

8. People have argued that a “real” run game would help improve Jalen Hurts’ play. The run game sure helped the Eagles beat Detroit, but I’m not sure the run game helped Hurts improve in areas where he’s shown deficiencies. First, it’s shocking that with so much under-center running there were very few play-action calls from the same formation, especially as the game progressed. Even if Hurts doesn’t like, or isn’t accustomed to, passing from under center, there were plenty of chances in the second half, up double-digits, to test him in those situations. Second, there were still some snaps in which Hurts fled the pocket too early and felt pressure even when there wasn’t.

9. Some will say the Eagles played “hide the quarterback,” which worked against the Lions but isn’t a good recipe for long-term success. I’m not sure Sirianni’s blueprint going into the game was to limit Hurts to just 14 passes for the game. The Eagles were simply blowing the Lions off the ball so much that it didn’t make much sense to force the issue or open the offense just because. It’s certainly fair to question the sustainability of their approach, even against the Chargers, who’ll bring the NFL’s worst run defense into the Linc on Sunday, but I don’t think Sirianni truly believes he can finish with a strong second half by “hiding” Hurts, nor do I think that really helps the team accomplish its objective of fairly evaluating Hurts’ long-term pro potential. I suspect Sirianni will try to run the ball more going forward than he did through the first seven weeks, but not nearly as much as he did Sunday.

10. For one drive, Sirianni did a nice job of creatively getting the ball in Jalen Reagor’s hands. Sirianni dialed up two carries for Reagor, who picked up 11 yards on the first and 10 0n the second. There was also the short goal-line shovel that nearly became a touchdown. Replay took the touchdown away from Reagor, who then left after suffering an ankle sprain, but this is another area where the coaches can improve. Reagor should be moveable weapon in the Eagles’ offense whose explosion needs to be tapped into more without just asking him to run downfield and win.