Birds Coaches Atone For Past Mistakes

The Eagles won convincingly Sunday for the first time since Week 1 against the Falcons.

On the latest Inside The Birds podcast, Geoff Mosher and Adam Caplan broke down the win in Detroit, touching on the offense, defense and coaching decisions. 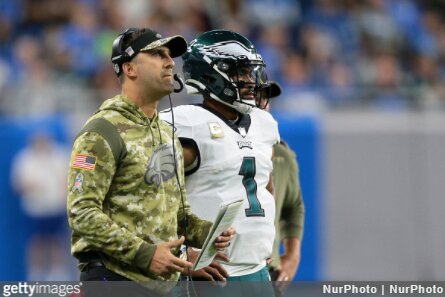 Adam Caplan: “For the first time in several weeks both play callers — the head coach and the defensive coordinator — took advantage of matchups which were clearly there and they came out and dominated. They established what they were looking to establish, kudos to them. They got a lot of criticism, and deservedly so, coming into this game but they dominated and they played hard. I’ve said all along despite how the team had struggled, they had never quit on these coaches they had not at all. The coaches needed to do a better job of coaching and they did, they were prepared. The players played their ass off on Sunday. They just had a lot of energy too, boy did they come out pissed off. They took it out on these poor Lions, who are now the only team in the National Football League without a win.”

Caplan: “[Dallas] Goedert is an absolute beast. He just is so physically dominant. I know it will never happen because these coaches and Sirianni are still trying to figure it out as play callers. Every game, I don’t care who the hell they’re playing, he should never get less than eight passing targets. He had seven in this game, they only threw it 14 times, he caught six. He is a man. He was all over, and if they would have had to throw the ball he would’ve had 20 catches, they could not handle him Sunday. He looked great.”

Geoff Mosher: “Jalen Reagor went out early. So it’s a little bit skewed but only four catches by Eagles wide receivers. That’s pretty incredible because we had noted in the pregame show that the Lions give up more yards to outside wide receivers than any team in the league by far, 105 yards per game, and the Eagles beat the crap out of them and they didn’t even have to throw it towards the outside receiver.”

Caplan: “The other thing we heard was that Edwards is going to be a full-time starter. He looked really good. He was active, he looked like he was all over it. He had a great game, this might have been his best game as an Eagle. I’ve got to see what the tape looks like but he had 13 combined tackles, two tackles for loss, a quarterback hit, he was everywhere.”

Mosher: “I’ve felt and still feel that their best combination is playing [Alex] Singleton and [T.J.] Edwards, I said that a week or two ago. I said play Singleton and Edwards and then when you’re in base and you need the third linebacker bring in [Genard] Avery. Clearly they want to evaluate and get better looks and use the athleticism that Davion Taylor possesses. OK, they were able to masquerade his deficiencies against the Lions. They’re in a mode [of], ‘Are we really just trying to win games with a guy that may not be on the roster next year in Singleton or are we trying to develop a player like Taylor, who is going to be on the team or has a chance to be on the team?’ So I get it, it’s difficult. I think the two I gave you is the better, winning combination, but they’re going with, ‘Let’s try to win and evaluate at the same time.’”

Mosher: “I think for the Eagles, their best recipe for success is not to fall behind. I don’t think that they’re going to be a team that’s good at playing from behind because of how their defense is and how easy it is to run on them. Well, clearly not only do they do a good job of stopping D’Andre Swift, he only had 27 yards on 12 carries. The bigger number is not the 27 it’s the 12, he only had 12 carries. When you’re up by 17 points in the second quarter and then 24 in the third and 31, then a guy like D’Andre Swift is going to become irrelevant because what are you going to do, start establishing the run when you’re down by three touchdowns?”