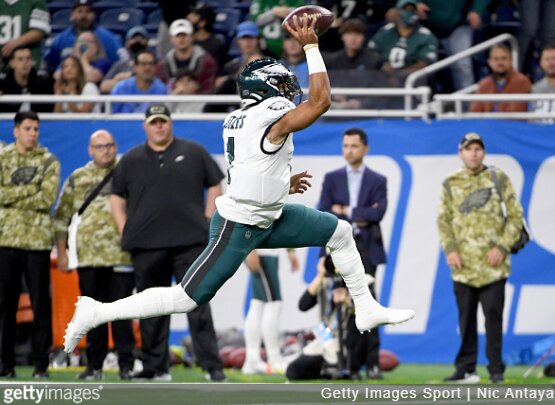 Jalen Hurts helped lead an Eagles blowout of the Lions

Sunday’s matchup against the Lions could have been perceived as an opportunity for the Eagles to add to the win column and recalibrate before returning to the Linc.

But with an identity crisis seven weeks into the season and skepticism surrounding them, a faltering Eagles team entered Ford Field with its season on life support. A win against the lowly, winless Lions wasn’t assured.

Spearheaded by the two-headed rushing attack of Boston Scott and Jordan Howard, the Eagles reversed a stale script, accumulating 236 rushing yards and dominating the line of scrimmage, averaging 5.1 yards a clip.

Defensive coordinator Jonathan Gannon revved up his vilified defense, exploiting a porous Lions offensive line by applying pressure and placing quarterback Jared Goff under siege for much of the afternoon.

The lingering question: Did Sunday’s thrashing offer an intriguing glimpse into the future, or simply a product of the competition?

1. It only took seven weeks and a Miles Sanders injury for Nick Sirianni and Co. to instill an altered game plan and lean on the running game to exploit an undermanned Lions front seven. It was widely assumed that rookie Kenny Gainwell would undertake a more prominent role, but instead Boston Scott and practice squad call-up Jordan Howard shouldered much of the load through three quarters. The duo combined for 13 carries, 76 yards and two touchdowns by halftime, while quarterback Jalen Hurts attempted just eight passes at the break. The two-headed rushing attack finished with 24 carries, 117 yards, and four touchdowns in the blowout win. Granted, it was against the Lions, but it was encouraging to see the Eagles impose its will against an inferior team, on their way to accruing 236 yards on the ground.

2. The Eagles’ linebacker carousel continued to churn this week, as Eric Wilson was listed as a healthy scratch 90 minutes before kickoff. T.J. Edwards and Genard Avery got the starting nod, as Gannon allowed his linebackers to play more aggressively and fast-flowing this week. Edwards, in particular, had an active afternoon. The third-year linebacker combined for 13 tackles, including two for loss, and a quarterback hit. Hard to tell if the boost in play was a product of competition or scheme liberation, but Gannon may have found a way to mask the deficiencies of his second level.

3. Much has been made about Jonathan Gannon’s passive, read-and-react scheme, but this week  Gannon finally unveiled a new plan of attack. The first-year coordinator called a much more aggressive game against the hapless Lions and dialed up blitzes early and often to pounce on an overmatched offensive line, resulting in four first-half sacks, including two from Josh Sweat. Derek Barnett’s second-half sack was catalyzed by a blitz from linebacker Alex Singleton. The Eagles finished with six sacks. The disruptive pressure never allowed Goff to do what so many opposing quarterbacks have done to the Eagles in recent weeks, dink-and-dunk for time-consuming scoring drives. Gannon also called for more single-high safety looks in an effort to make the Lions one-dimensional. Deploying an extra safety in the box with increased frequency helped stifle a Lions ground game that mustered just 57 yards on 18 carries.

4. Just like Gannon’s defensive philosophy has been dissected and subjected to criticism, the same can also be said for Sirianni and his ideologies. Sirianni, whose offense has been devoid of balance, rhythm, and creativity for over a month, modified his approach against the Lions. The screen game was placed on the back burner – for now, anyway — in place of increased designed runs. As a team, the Eagles carried the ball 46 times for 236 yards and four touchdowns. Credit Sirianni for committing to the ground game and not deviating from the successful formula.

5. It was also nice to see Jalen Reagor utilized on a jet sweep and end around, maximizing his short-area quickness and explosiveness as intended when he was drafted. The second-year receiver recorded 21 yards on two carries on the Eagles’ second possession before being carted off later on the drive with an ankle injury following a would-be touchdown.

6. Hurts attempted just 14 passes against the Lions, but it was notable that seven were directed at tight end Dallas Goedert. Even before the Zach Ertz trade, Goedert’s usage was rightfully questioned despite a pass-happy offense. Goedert provides a dynamic and explosive big-bodied receiver to operate in the short-to-intermediate areas and the newly appointed TE1 reeled in six of seven targets for 72 yards. The Eagles lack a physical receiving presence, and Goedert presents matchup conundrums in both the middle of the field and in red zone situations. In my scouting report, I noted that the Eagles must capitalize on a vulnerable Lions second level, particularly against linebacker Alex Anzalone. While they successfully exploited a weak spot and made Goedert a focal point in this week’s gameplan, they need to do with more consistency. The fourth-year tight end adds another dimension to the passing attack.

7. Avonte Maddox quietly continues to deliver for this football team. Against the Panthers, it was a game-altering pass breakup to prevent a long touchdown to Robbie Anderson. Against the Buccaneers, it was his sound open-field tackling on a pair of short throws to Antonio Brown that halted drives. His interception in Raiders territory temporarily gave the Eagles life early in the contest last week. This time, Maddox, a Detroit native, dislodged the ball from Lions running back DeAndre Swift after an 8-yard gain. Former Detroit Lion Darius Slay recovered the fumble and returned it for a 33-yard touchdown. I wouldn’t be surprised if the Eagles inked Maddox to an extension to keep him around long-term.

8. For the first time this season, the offense wasn’t solely on Jalen Hurts’ shoulders. The second-year quarterback completed 9-of-14 pass attempts for 103 yards, and added 71 yards rushing. Still, Hurts resumed his troubling trend of fleeing the pocket early and left some plays on the field. Early in the second quarter, Hurts missed a wide open DeVonta Smith instead opting for a short completion to Goedert. His pass was tipped by defensive tackle Da’Shawn Hand and ultimately fell incomplete. Jake Elliott converted on a 43-yard field goal attempt on the next play. But while it didn’t affect the outcome this particular week, that possession should have ended in six points instead of three. When you’re a team with little margin for error, you simply have to hit those. The Chargers won’t be as forgiving next week.

9. The Eagles have to be pleased with the performances of rookie defensive linemen Milton Williams and Tarron Jackson on Sunday, as each notched his first NFL sack. Additionally, sixth-round defensive tackle Marlon Tuipulotu was active this week for just the third time this season and appeared on the stat sheet for the first time. From a developmental standpoint, allowing the young defensive linemen to see the field and get experience will help to ease the transition as the team inevitably trends toward a youth movement in the trenches.

10. Gainwell ended up leading the backfield with 13 carries, but much of that was in an uneventful fourth quarter. Evidently, the Eagles are partial to Scott and Howard as the primary ball carriers while Gainwell mixes in as a change-up and pass-receiving option. With the power and burst that Howard showed in his 12 carries, one has to wonder whether the veteran running back will factor into the offense even after Sanders returns from his ankle injury. Howard, who hadn’t appeared in a regular-season game since Week 16 of last season, looked fresh, strong, and quick against the Lions and provides the Eagles with a sorely needed power running element.

BONUS OBSERVATION: Lost amid a 44-6 blowout, the Eagles only committed two penalties against the Lions, and neither were of the debilitating variety. They’ll have to hope that carries over against the upstart Chargers next week.