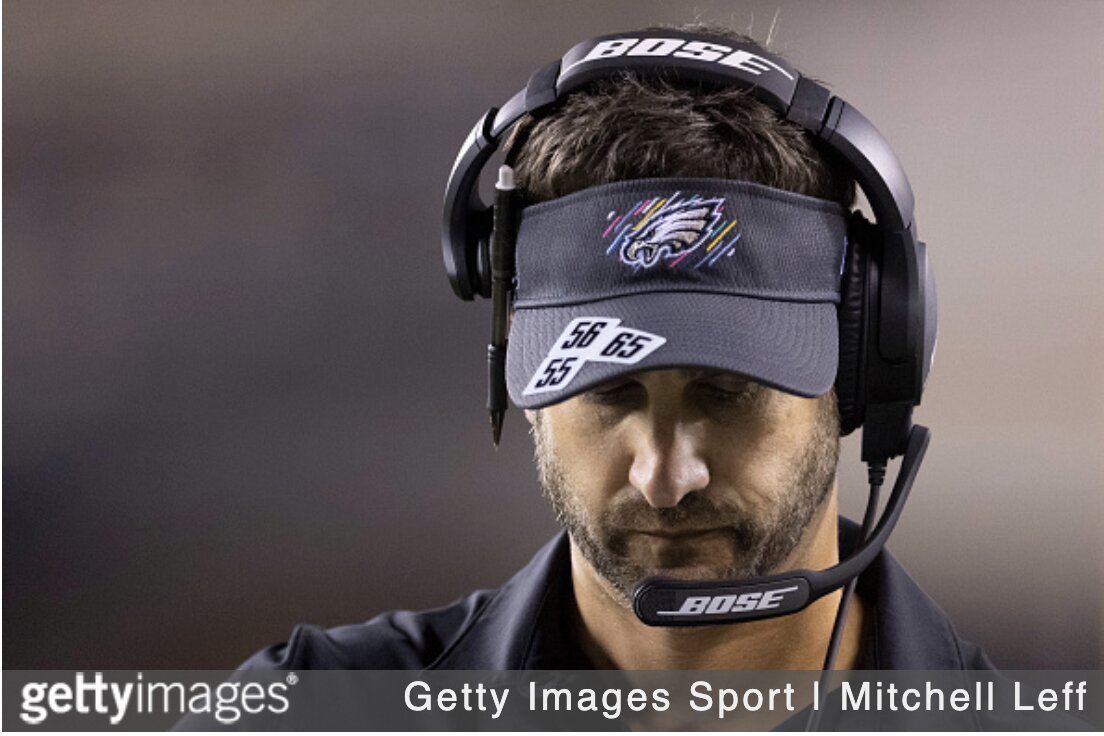 Nick Sirianni and his coaches need to find answers

Changes are coming for the Eagles. They have no choice. They have to switch it up.

How could they not?

The team and its new coaches are losing games, losing public confidence, losing faith of those who’ll eventually determine their fates.

The players don’t believe the Eagles coaches are game-planning each week with the right frame of mind, the right recipe for success. They don’t think they’re being positioned for success.

For weeks, head coach Nick Sirianni threw a padlock on his running backs and conventional offensive concepts in order to cater to his quarterback’s best strengths. Turns out, the offense and quarterback both regressed.

For weeks, defensive coordinator Jonathan Gannon has stubbornly drawn up soft zone schemes and asked personnel more accustomed to executing from within a static 4-3 alignment to acclimate and prosper within a multiple-front scheme.

Longtime defensive tackle Fletcher Cox, who’s frustration for weeks has been worn on his face, finally let his feelings be known after Sunday’s 33-22 loss to the Raiders, a loss in which Raiders quarterback Derek Carr completed over 90 percent of his passes.

“It’s just one of those deals where as a player I didn’t kind of agree with what was called on defense,” Cox said, “So, I just kinda let my frustration go, and thats part of the game.”

Cox’s sentiments weren’t isolated. Even the head coach couldn’t hide his own distaste for a playbook that haplessly allowed Las Vegas to churn out more than 450 offensive yards with relative ease, and with its top offensive weapon viewing from the sideline.

Gannon, like his predecessor Jim Schwartz, has ranked among the most reluctant blitzers in the league. Unlike Schwartz, Gannon’s team has also allowed massive amounts of rushing yards and sat in soft zones while opponents have feasted on extremely manageable down-and-distances.

The Raiders ripped off 21 straight plays during a stretch spanning the first and second quarters, scoring 14 unanswered points, before confronting a third down. That’s an astronomical number of plays to run without facing a decent pass rush.

Gannon made no adjustments at halftime. Not surprisingly, the Raiders ran 11 plays in the third quarter before encountering 3rd-and-6, which they converted easily, en route to going ahead 30-7.

Every defense’s main objective each week is to force opponents into arduous third-down scenarios. The Raiders confronted just two third downs during a 36-play stretch spanning the first and third quarters.

Gannon just stood there and watched.

“When you’re playing these good quarterbacks … and you’re giving up this high a percentage … you’ve got to make changes, you’ve got to adapt, you’ve got to move,” Sirianni insisted after observing Gannon do the opposite for 60 more minutes. “I’m not saying you have to make a complete philosophy switch, but we’ve got to do things to help our players out, absolutely.”

Sure sounds like the head coach and defensive coordinator have some TED talks planned this week.

Unfortunately, these chats supposedly happened already. Sirianni made similar comments after the Eagles were chewed up on prime time by Dak Prescott and the Dallas Cowboys, who rolled up 380 yards and scored five touchdowns in a 41-21 Week 3 blowout.

Which brings us to an issue that goes beyond scheme or game planning.

Is anyone listening to the head coach?

That’s an important question as losses for the Eagles and Dolphins mount, with potential first-round picks looking better by the week.

The Eagles could feasibly have two top-10 picks (theirs and Miami’s) in 2022, along with an extra first-rounder from the Colts.

Howie Roseman, assuming his role doesn’t change, will have plenty of ammunition to improve the overall roster and supply the coaches with personnel they need to make their schemes function.

There’s no question that personnel, especially on defense, is problematic and equally responsible for the team’s 2-5 record.

But trusting Roseman to properly hit on these picks, at positions where he’s either historically struggled to identify talent (cornerback, linebacker) or just outright ignored (safety), and then trusting a coaching staff that hasn’t yet shown its own acumen to develop those picks, sounds like a recipe for some long, dry years ahead.

The optics of owner Jeffrey Lurie firing Sirianni or Gannon after one season, especially after making the bold move to fire Super Bowl champion coach Doug Pederson after one implosive year, must be considered.

Which is why something must change over the next 10 weeks to inspire some sort of confidence that Sirianni and his staff deserve to preside over the wave of prospects about to be ushered into the organization.

The Eagles have an average roster and winning the division should have never been a realistic expectation for them.

But they’ve got too many veterans at important positions to be this bad, too much talent to be picking in the top 5, too many resources to be this easy for teams to topple.

The coaches can and should make better use of the personnel they’ve been given. They have to make changes to salvage their reputations, to regain trust from their players, to make Lurie believe he made the right choice.

They need to act, and quickly.

How could they not?