The Eagles, fresh off of a commanding double-digit victory over Washington on Tuesday, will look to even the season series against the Giants and create separation amid a crowded NFC playoff race. 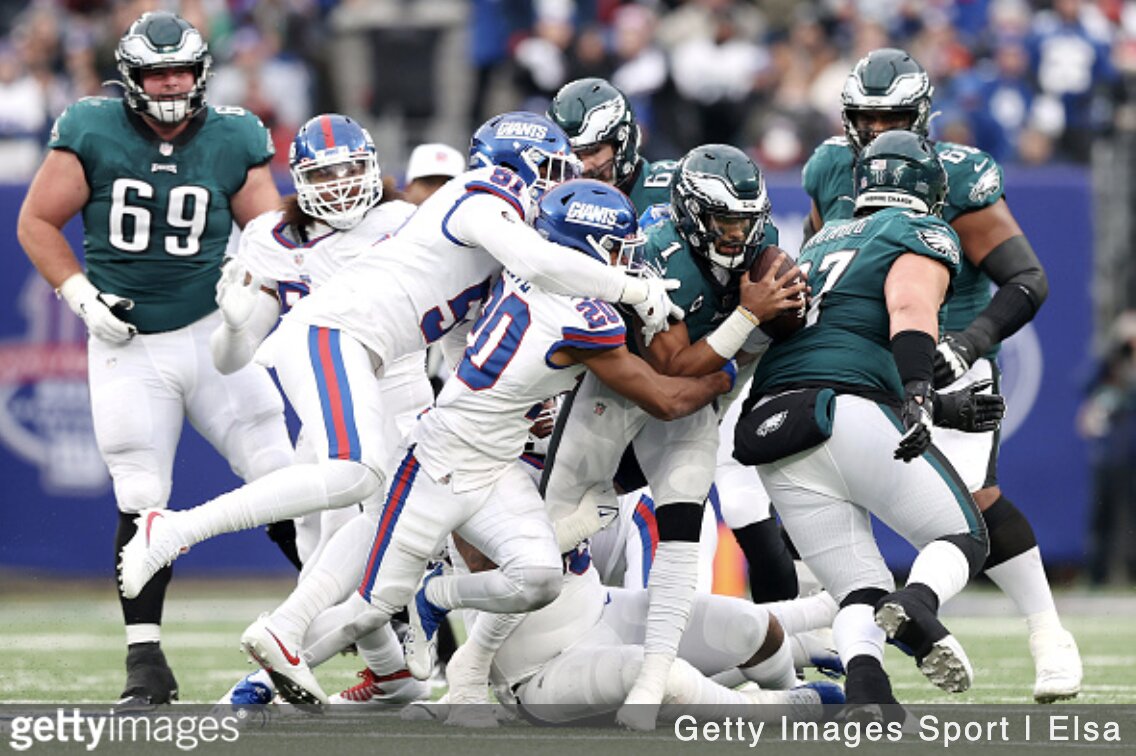 RB Miles Sanders vs. Giants front 7: Since returning to the lineup from injury, Sanders has compiled 409 rushing yards over the past four games. The third-year running back is coming off of a game in which he carried the ball 18 times for 131 yards against Washington, but even on a short week, Sanders should be able to find ample running room against the league’s 26th-ranked run defense, allowing 125 yards per game. The stage is set for Sanders to eclipse the 100-yard rushing mark for the third consecutive game.

TE Dallas Goedert vs. Giants LB: After mustering one reception for zero yards against the Giants in Week 12, Goedert has racked up 13 receptions for 240 yards and two touchdowns on 15 targets in wins over the Jets and Washington Football Team, respectively. The Eagles have made a concerted effort to ensure the passing game goes through the athletic, big-bodied tight end, and he’ll have a distinct advantage again this week, working against linebackers Lorenzo Carter, Reggie Ragland, and Tae Crowder. Given the matchup, Goedert should have an opportunity to stretch the Giants vertically while also thriving on intermediary routes. The Eagles’ passing game goes through Goedert.

DE Josh Sweat vs. RT Nate Solder: Sweat is second on the Eagles in sacks (5.0) behind Javon Hargrave (7.5) but has been inconsistent since signing a three-year, $40 million extension in September. Despite a dream matchup against Washington tackle Cornelius Lucas on Tuesday, Sweat managed just two combined tackles. Sweat doesn’t appear to have the same burst he showed earlier this season, and it’s likely that playing a career-high in snaps (582) is limiting his effectiveness. Still, the Eagles need more from their top edge rusher. He’ll have another prime opportunity to add to the sack column on Sunday against veteran Nate Solder.

LB Alex Singleton vs. TE Evan Engram: The uber-active Singleton has performed well since rejoining the starting lineup, combining for 16 tackles and a forced fumble the past two games. However, the Giants are likely to adopt a simplistic game plan with quarterback Jake Fromm at the controls, which should feature a run-heavy approach behind Saquon Barkley and short, safe throws over the middle to the tight ends and running backs. Singleton, though instinctive and rangy, is considerably undersized and has limitations, so look for the Giants to scheme up ways to exploit those deficiencies.

For Philadelphia, wide receiver Jalen Reagor serves as the kick and punt returner. He has managed 255 yards on twelve kick returns and 170 yards on 26 punt return opportunities.

The Eagles have won seven consecutive games against the Giants at Lincoln Financial Field.

Eagles WR Jalen Reagor: Reagor’s egregious gaffes in the first meeting were rightfully criticized, given the moment and the magnitude. However, while most were intent on phasing out the second-year receiver from the offense , Reagor showed impressive resolve on Tuesday night, reeling in all three of his targets for 57 yards – including a crucial 34-yard catch-and-scamper. Given the depleted state of the Giants secondary, attention devoted to DeVonta Smith and Dallas Goedert — and perhaps a renewed confidence — Reagor could be the beneficiary of increased targets once again.

Giants TE Evan Engram: With Fromm, the second-year pro, poised to take the reins, the Giants’ passing game could be limited to the short-to-intermediate areas of the field. Engram, a dynamic move tight end when healthy, should serve as a security blanket for Fromm, who enters Week 16 with just a 50-percent completion percentage and 82 passing yards on his resume. Engram has seen a combined 14 targets the past three weeks, and I’d expect anywhere for 6-to-8 targets this week, in an effort to exploit the Eagles’ middling second-level.

The Giants got the best of the Eagles in the first meeting, largely due to a savvy defensive formula implemented by coordinator Patrick Graham. However, merely four weeks later, both teams find themselves on opposite ends of the spectrum. With a potential playoff bid at stake, look for the Eagles to come out swinging on offense this time, while Jonathan Gannon’s bunch bears down on an inexperienced Fromm.