An abundance of positive signs came from the Philadelphia Eagles during their 35-10 victory over the Tennessee Titans.

On the latest episode of “Inside The Birds,” Adam Caplan and Geoff Mosher gave injury updates and provided sourced intel from the All-22 film. 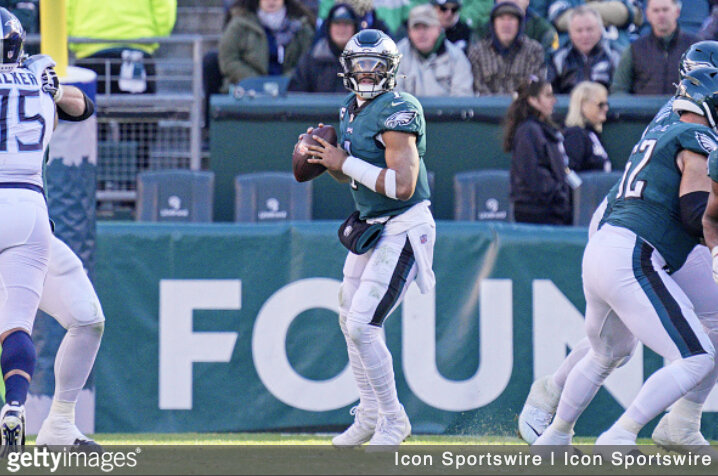 Geoff Mosher: “We’ve been saying it since the Washington game, from league sources that watch the tape, that he just has not looked right at any point since being an Eagle. At first, there was a back [injury], now it’s the knee. You and I have talked to people who were saying his rush does not look like what it was last year. His bend isn’t there, his explosion’s not there. At this point, he’s definitely out four games. His first game to come back from IR would be the last game of the year. It’s very unlikely the Eagles are going to be playing important players. They also will almost definitely have a first-round bye, so Robert Quinn might have six weeks to rest and heal up.”

Adam Caplan: “What (Greg) Cosell told us on our pregame show, not only can he not bend, but he looked stiff. He couldn’t lower his body. You can’t do that as a pass rusher.”

Caplan: “The one thing we knew from watching the game live was the Eagles had a game plan. They were coming out throwing and they were not going to stop. Hurts had 13 plays of 10 yards or more this game that were completed. They were relentless…Here’s the great stuff about Hurts: He’s decisive as hell. He had some plays where he got what he thought he was going to get…His balance is really good, his posture is really good.”

Caplan: “Here’s what they did to Jeffery Simmons. It wasn’t just the combo blocks and double teams; they stood him up. They stonewalled the guy. It was magnificent. The guy was silent the whole game…They were so synchronized. Now, the penalties were absurd, but it’s all correctable.”

Mosher: “On that second Hurts touchdown to A.J. Brown, he said he didn’t beat his man and he didn’t think Jalen was going to throw him the ball because he didn’t have the step on his man. Jalen threw it anyway and you saw this elite ability that we have seen of A.J. Brown. He is so good at recognizing late that the ball is in the air, it’s coming to him and him being able to make the adjustment to catch the ball.”

Caplan: “The first sack by Javon Hargrave was because of Haason Reddick. He made (Ryan) Tannehill move right into Hargrave. He had a great game. Josh Sweat had this one great sack, I can’t believe how well he moves considering that bad leg. He had one move where he jab-stepped right and he went left and the dude whiffed and he got to Tannehill. Those two guys met at the QB two or three times. Both were great. And I have to give Fletcher Cox credit. His energy was great. It’s not about sacks as much with him now, it’s consistent effort.”

Mosher: “I agree it’s not about sacks, it’s really about are you fighting through the double teams, are you creating pressures? They have guys on the outside who are cleaning up really well. Just a fantastic all-around game from the defensive front. And of course, Linval Joseph getting in there and playing a decent amount when they were in their five-man fronts with Jordan Davis only playing a few snaps was big, too.”

Caplan: “The reason why they shut down (Derrick) Henry was not just the d-line. The corners tackled tremendously well. (James) Bradberry had two great tackles, (Reed) Blankenship stuck his nose in there, (Darius) Slay tackled well, got in there.”

Mosher: “The only concern might be the slot where Josiah Scott has been filling in for Avonte Maddox and teams have been able to get him at times. Treylon Burks got him and when he went out, that favored the Eagles. Other than that, there was nothing to worry about there.”

Caplan: “He did a nice job in pass defense. He had a pass defensed, he had the one tackle with his hand. He didn’t look out of place.”

Caplan: “The thing about Covey is people want to blame him for a lot. What we were told is they had not really blocked well for him. This was the most well-blocked game for him by far.”