Todd Pinkston was one of the 22.5 million viewers tuned into “Sunday Night Football” to watch the NFC East showdown between the Eagles and Cowboys.

For five seasons – four of which he served as a starting wide receiver for the Eagles — the wiry-framed Pinkston experienced one of the NFL’s most famous rivalries firsthand.

“You know I’m gonna catch those type of games,” Pinkston told Inside The Birds in an interview. “Anytime you see the Eagles playing somebody in that division, I’m gonna watch that.

“I watched it in front of the TV, which was very exciting. I had my popcorn ready. I watched it as it panned out.” 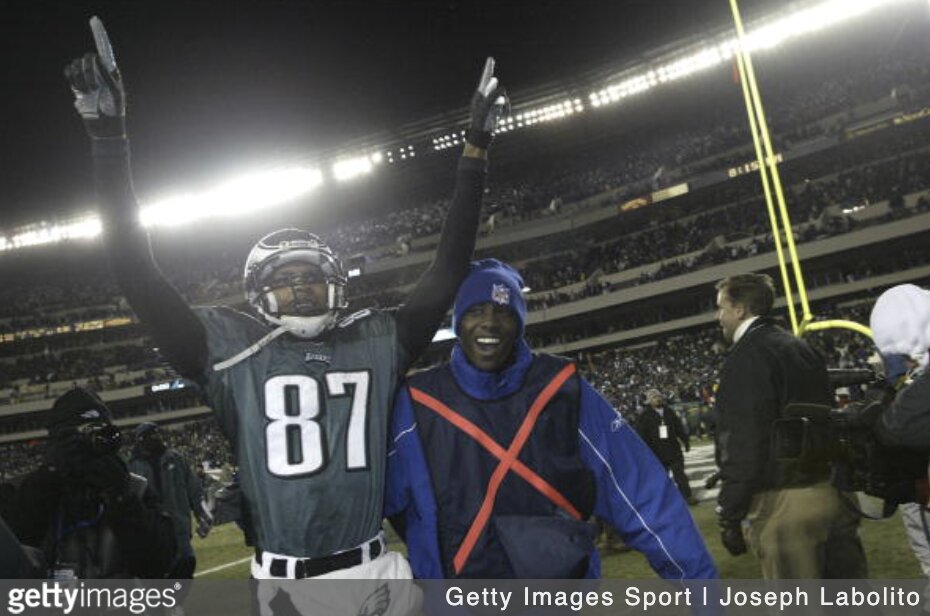 Todd Pinkston celebrates the Eagles winning the NFC in 2004.

Pinkston, now a wide receivers coach and special teams coordinator for Stockbridge High School in Stockbridge, Ga., intently watched as the Eagles extended their perfect record to 6-0, a feat last accomplished by his 2004 Eagles.

To preserve perfection last Sunday, however, the Eagles needed to withstand a turbulent third quarter that saw quarterback Cooper Rush and running back Ezekiel Elliott march down the field with little resistance, before ultimately regaining control and extinguishing their divisional foes in the final act.

“I’m very impressed with them,” Pinkston said. “It kind of reminds me of the ’04 team, with their skill-sets at all positions. Jalen Hurts being a Donovan McNabb; DeVonta [Smith], being a skinny guy like me; and A.J. [Brown] being a big guy like T.O.

“And role players like we had, with Freddie Mitchell, then you got Quez [Watkins] and Greg Lewis. Then you have the other receivers. And you have the running backs; [Miles] Sanders is like a [Brian] Westbrook. So, it kind of reminds me of the ’04 team as far as the offense, and the defense is basically identical to the guys we had in ’04.”

Eighteen years ago, when Eagles brass realized that their championship window was narrowing in the wake of falling short in the NFC title game three consecutive years, the team pushed all its chips in the middle and splurged in free agency ahead of the 2004 season.

“It was different,” Pinkston admitted. “When those guys came in, they didn’t skip a beat. Dhani, Hugh, and [Jevon Kearse], those guys were veteran guys – it wasn’t like they were rookies coming in – but having that veteran team, it helped us throughout the course of the year, because when we went 7-0 and ended up losing to Pittsburgh, we came back the following week and went on another streak.

“So, it kind of helped us out, once those guys came in. And the chemistry that we had just took it to another level.”

That newly constructed, veteran-laden Eagles roster was widely viewed as finally poised to seize control of the NFC and win the Super Bowl. Pinkston sensed an underlying quality from the onset.

“It was preseason, training camp,” Pinkston recalled. “As far as Andy Reid’s style, he gets the most out of you in training camp. And once we saw what we had going into the first game of the season, we knew it was something special because of the skill-set we had – offense, defense, and special teams-wise – that we knew that we had a chance to get to where we wanted to get to.”

The cohesion between the Eagles two superstars, McNabb and Owens, was instant, and over the course of six games, the NFL’s most feared passing combination connected 34 times for 596 yards and eight touchdowns.

“I looked at it as his skill set,” Pinkston explained. “He came from a great receiving corps with Jerry [Rice] and J.J. Stokes and all those guys. Once he came over to Philly and I saw his work ethic, who wouldn’t wanna have that mentality that he has and do whatever he had to do to get him open?

To equate it to modern terms, when the Eagles acquired Brown on draft night, it was a move made with the aim of bolstering Jalen Hurts’ firepower as well as providing the offense with a big-bodied pass-catcher possessing a skill-set that would theoretically create more opportunities for other skill players.

Through six games, Brown has accounted for 33 receptions, 503 yards and two touchdowns.

For the 2004 Eagles, their perfect season came to an end after seven games against the Pittsburgh Steelers – the Eagles’ next opponent.

“Actually, T.O. and I talked about it before,” Pinkston said. “What it was is, we had a slow start. Guys just tried to gravitate around each other and try to make plays, but at that time, their defense was stout, too. So, the slow start kind of bit us in the butt early on, but that’s one of the biggest games that we learned from because they did stop our streak.

“And then once we went back and watched film, the mistakes that we made, it wasn’t them, it was more so us. So, I can say that that game, we learned from.”

Rather than stymieing the team’s trajectory, inciting a tailspin, or dividing the locker room, the loss to Pittsburgh galvanized the 2004 Eagles, which went on to win six straight and clinch the No. 1 seed and a first-round bye ahead of a postseason run that saw the Eagles overcome the late-season loss of Owens – which thrust Pinkston into the limelight — to reach Super Bowl XXXIX in Jacksonville, Fla.

“I didn’t do nothin’ different,” Pinkston recalled. “I just continued to do what I had to do and be the leader who I needed to be. When your number is called, you just have to take responsibility and do your job. So, I just knew that my role had changed, but I still was doing the same thing as far as doing my job.”

No one Eagles player drove the team’s success that year, but Reid remained a stoic and unflappable leader. His voice and message resonated throughout the locker room, and he encouraged his team to showcase their individuality. With Reid at the helm, the Eagles learned to elude the trappings of success and navigate adversity without losing sight of the bigger picture.

“We handled it well,” Pinkston said. “We had a lot of veteran guys, and me coming in in 2000, we were on the rise. And I knew right then that everybody grinding and becoming one – because the old saying was, ‘One city, one team’ – once we got that together, we knew that the sky was the limit.

“We knew that Coach Reid was gonna put a team together to make us successful. And that’s what he did when we were winning back in the early 2000s.”

As this season progresses, a young Eagles team will inevitably be tested in a number of ways on its own path to prominence.

“Just stay humble,” Pinkston advised. “Don’t peak too early and take it one game at a time. Once people start praising you, as soon as you lose that game, then they’ll start bashing you.

“So, just staying humble and going with what got you there is the biggest advice I got for ‘em.”