In the wake of a decisive prime-time victory over the Minnesota Vikings, the Philadelphia Eagles (2-0) travel to Landover, Md., for its first NFC East matchup of the season to take on the Carson Wentz-led Washington Commanders (1-1).

Jalen Hurts and the scorching Eagles offense delivered a near-flawless performance against the NFC upstarts, while Jonathan Gannon’s defense appeared to round into form following a week of intense scrutiny, collecting three interceptions and a pair of sacks.

As for Wentz, the former Eagles signal-caller currently ranks second in the NFL in passing yards (650) and sits atop the leader board in touchdown passes (7), in a tie with Josh Allen, Patrick Mahomes, and Tua Tagovailoa.

Let’s take a look at four players who are primed to make an impact on Sunday afternoon. 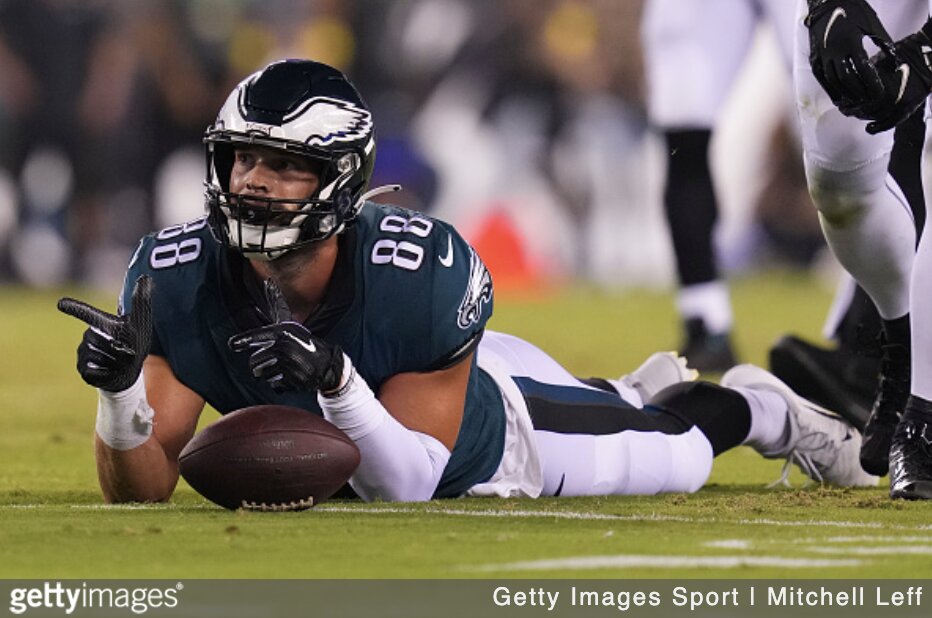 Dallas Goedert’s first TD catch of 2022 could come vs. Commanders.

TE Dallas Goedert: The multifaceted tight end has logged 10 pass targets through two games and appears on the cusp of a breakthrough. While the Commanders have allowed just 8 receptions for 79 yards to the position (12 targets), the budding chemistry between Goedert and quarterback Jalen Hurts has become increasingly evident and could take center stage. The Commanders boast a formidable defensive front, so anticipate an early game script consisting of quick dump-offs and Hurts peppering his safety valve with targets on intermediary routes.

DT Fletcher Cox: On the heels of an underwhelming Week 1, Cox returned to form under the bright lights of Monday Night Football, registering a sack, forced fumble, and quarterback hit over 40 snaps in the 24-7 win over the Vikings. The six-time Pro Bowl defensive tackle was a disruptive force against a hapless Minnesota interior and pushed the pocket with consistency, all while catalyzing a stingy run defense that held the Vikings to just 62 yards on 11 carries. This week, Cox squares off against a much-maligned Commanders offensive line that will be further compromised, rolling out a backup center in place of injured Chase Roullier. Look for a disruptive afternoon from Cox and Javon Hargrave, moving polarizing Commanders quarterback Carson Wentz off his spot and hastening his decision-making.

WR Curtis Samuel: Samuel played as many snaps as Terry McLaurin did last week (66) and led the Commanders in targets (9) and receiving yards (78), while tying for the team-lead in receptions (7). A dual-threat offensive weapon who can break a game open on any given play, Samuel also factors into the equation as a runner, where’s he’s accumulated 38 yards on five carries. With all Eagles attention presumably devoted to slowing the trio of McLaurin, running back Antonio Gibson and ascending rookie wideout Jahan Dotson, keep an eye on Samuel, who should have a handful of opportunities to get the ball in space in a multitude of ways to catch the Eagles defense by surprise.

DT Daron Payne: Payne, who compiled a sack and a pair of quarterback hits last week against the Lions’ Jared Goff, is off to a fast start this season. Through two games, the 25-year-old has totaled two sacks, five quarterback hits and two passes defended. As stout as the Eagles’ offensive line is, if there’s one area that can be tested it’s at right guard, where veteran Isaac Seumalo has struggled with his leverage at times. Left guard Landon Dickerson (foot) is also listed as questionable. In my estimation, the Commanders’ interior pressure represents its pathway to victory. And for that to happen, Payne would have to factor prominently.