The Philadelphia Eagles flew home from Detroit after a 38-35 victory over the Lions that showcased a strong running game and quarterback play, but also some concern on defense.

On the Inside The Birds Week 1 Postgame Show, Adam Caplan and Geoff Mosher were joined by Eagles Hall of Fame offensive tackle Tra Thomas to break down the opening game. 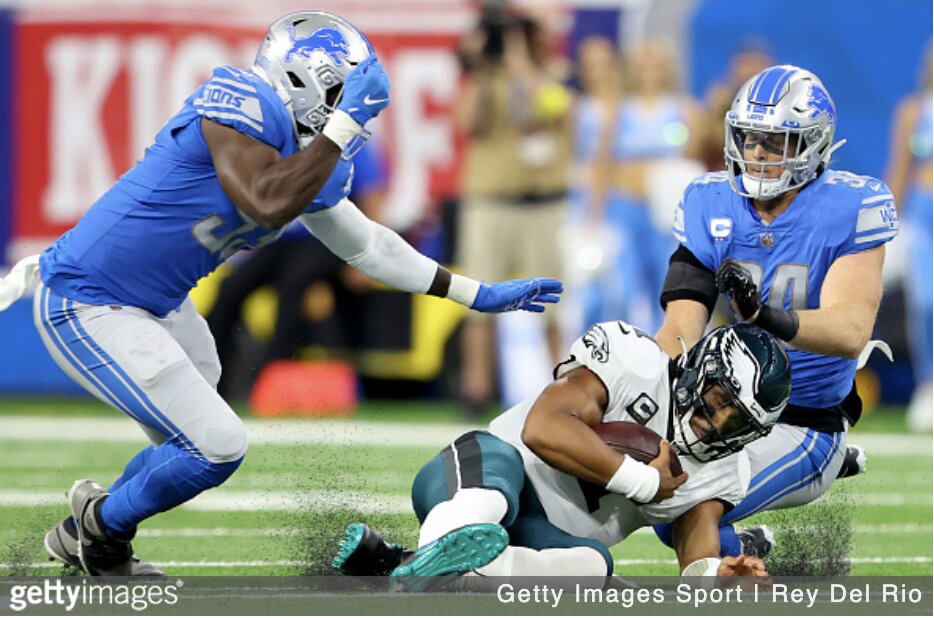 Eagles QB Jalen Hurts ran 17 times against the Lions in the season opener.

Tra Thomas: “Jalen Hurts cannot continue to play this type of game. There were a lot of hits taken. I know he helped the offense a lot with being able to escape the pocket, but when you have a season like this, when you have 17 games, to take that kind of punishment an entire season I don’t think would be beneficial for him as a player.”

Geoff Mosher: “Jalen Hurts definitely ran a lot, but I also felt that, unlike the whole bailing from the pocket, he had to. They came after him, they pressured him.”

Thomas: “When you talk about playing against an RPO, the one thing that you can do is you have to put pressure. You have to send as many guys as possible to kind of disrupt it. It’s all about how that backside defensive end or the backside linebacker plays. So when he is that type of player where he can get you out of certain issues, it kind of concerns you a little bit when he takes that many hits just because he’s such an athlete and he means so much to this offense because of the way he can get you out of trouble.”

Adam Caplan: “I am just blown away. The epitome of A.J. Brown is where Will Harris absolutely mugs the guy, [Brown] goes right through him and makes a 54-yard catch. That is A.J. Brown at his greatest. They had no answer for him. He caught 10 out of 13 targets, if they would have targeted him 20 times, he would have had 17 catches.  He was unstoppable.”

Mosher: “Can we finally all give Miles Sanders some credit? I feel like he gets unfairly knocked like he’s not a tough inside runner, but I think he showed you on that 3rd-and-1 that he was stuffed at first, bounced it to the outside, got the 24 yards, and [also] scored the goal-line touchdown. Last year, everybody made a big deal that he had no rushing touchdowns. He also didn’t get the ball as much in the goal-line situations because Jalen Hurts had 10 rushing touchdowns. I thought Miles Sanders on 15 touches and over 100 total yards gave you exactly what you should get from Sanders.

Thomas: “I thought he was solid. I thought he had a really good showing today. Because of the way this offense is set up, defenses have to play you in nickel, which plays in your favor especially when you have an offensive line like this: our five against your five and then now the running back has to beat one, I like our chances when you have someone like a Miles Sanders back there.”

Mosher: “There was a lot of penetration. They were also bringing more defenders than offensive linemen to block and so in that case, isn’t it on your quarterback or your backs and tight ends if they’re chipping to get the job done there?”

Thomas: “You want to be able to make sure you get a body on a body. If they do bring that one extra person, then now the quarterback has to go. But there were a couple times where you have a pressure, they sent the corner coming off of the right side one time and you didn’t slide all the way to the right. Everybody got muddled up in the middle, corner comes free outside, that’s something that you’ll go back and you’ll watch that on film and you’ll make the corrections you need inside the line.”

Mosher: “It’s almost feels like they’re trying to play two different defensive-line structures. They opened up the game in kind of a 40 front, they had three down linemen and one overhang, and got run on. And then the next time they came out for defense, when you saw Jordan Davis for the first time and Brandon Graham was in there also for the first time as if they were trying to get a little bit better against the run, especially up the middle. And then they took the lead and switched back to more of a nickel look.”

Thomas: “The concern I have about this defensive front is: Where is the pressure on the quarterback? I know a lot has been said about Detroit’s offensive line, but to come out of this game with only one sack, to me it just looked like [Jared] Goff was just having his way at times just getting rid of the ball.”

Caplan: “Their regular front, they got no pressure. I was surprised. I know that [Derek] Barnett got hurt … and then [Fletcher]mCox left then came back. The conditioning thing does worry me. I know it’s hard to quantify that, they seemed to be completely gassed in the second half. They barely held on.”