Monday’s session was the fourth overall practice and a “yellow” day, which means moderate intensity. Tuesday will be a high-intensity “green” day, with players in pads for the first time in camp.

But don’t expect contact to ratchet up all that much. Head coach Nick Sirianni said in his pre-practice news conference that his “live” sessions at camp this summer will not include tackling to the ground.

Monday’s practice featured some full-team drills (11 vs. 11) along with some 7 on 7. The run game was also emphasized as players were in helmets and shells.

Here are my main takeaways from the roughly 75-minute session: 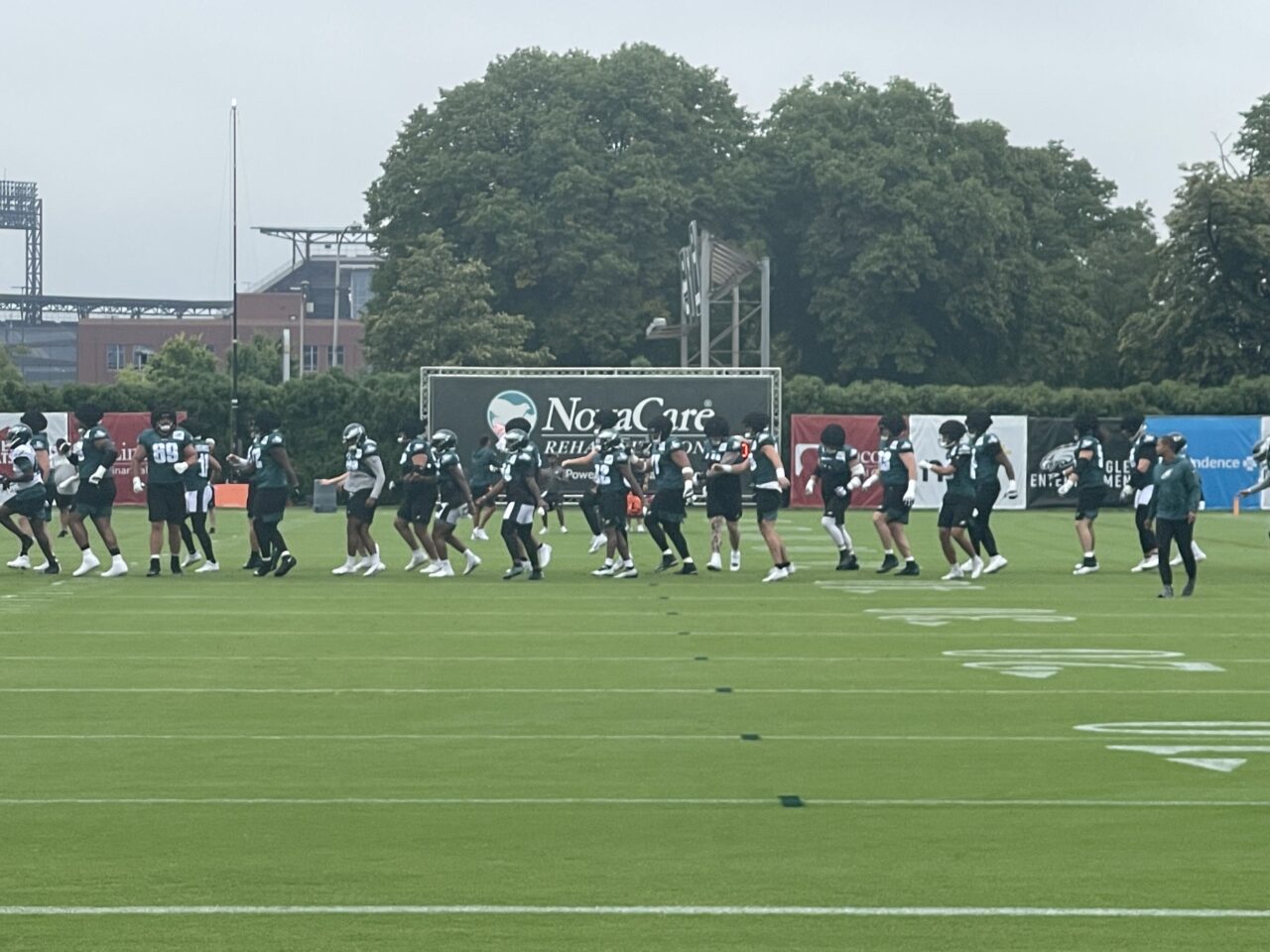 ITB photo: Pads come out Tuesday as the Eagles on Monday went through their fourth practice.

* The passing game, once again, was just OK. By my estimate, Jalen Hurts was only incomplete on two passes, an underthrow to Dallas Goedert and overthrow to A.J. Brown after Brown put a late move to the outside to shake James Bradberry, but Hurts was generally crisp on his slants, checks downs and intermediate throws.

He wasn’t intercepted – which was a topic of conversation earlier at Sirianni’s presser after some recent turnovers – but he also didn’t take many, if any, opportunities to drive the ball downfield. He also left the pocket in a 7 vs. 7, which always surprises me because there’s no pass rush to flush him out. His best throw led Brown over the middle in 11s, allowing the explosive wideout to gain more yards after the catch.

* The absence of a downfield passing game has been an early theme at camp. And the defense again appeared to be a step faster and quicker than the offense, which we discussed in today’s ITB. It’s fairly common each year for the defense to be ahead of the offense, as offense is more complex and requires timing and rhythm. But the Eagles have too many weapons who can make plays downfield to lack an efficient aerial attack. If you didn’t know anything about the Eagles and watched the entire practice, you wouldn’t know second-year wideout DeVonta Smith is one of the team’s best weapons.

* The nicest pass of the afternoon came from Reid Sinnett to Deion Cain on a deep out along the right sideline. Sinnett showcased good arm strength during the session and put the ball right where Cain could make the catch just before going out of bounds, away from the defender.

* Carson Strong has a ways to go. He’s struggling with accuracy, which might be a product of learning a new offense and being unsure of where to go with the football. Quarterbacks aren’t often picked off in 7 on 7 drills but Strong threw interceptions on back-to-back snaps in 7s, and both were legit bad passes. Gardner Minshew also tossed a bad pick, this one coming in 11s. He stepped up in the pocket to avoid pressure but his pass over the middle got snared by linebacker Shaun Bradley. Minshew also had a pass deflected by a corner and picked by a diving Marcus Epps.

* The training Miles Sanders put in this offseason to build his lower-body strength clearly worked. Sanders’ thighs are more muscular and his entire lower-body appears more firm and stout. Sanders took his first carry, made a swift cut and scampered down the right sideline. He added a few more breakout runs during the session.

Much is being made about Sanders taking second-team reps at times, but I wouldn’t get too wrapped up in the rotations. The Eagles are carrying just five running backs, and the majority of the reps will go to Sanders, Kenneth Gainwell and Boston Scott. The coaches like Gainwell, so it’s not a shocker that the second-year back from Memphis would get more first-team snaps in practice.

Sanders also appears to be emphasizing ball security, especially at the ends of his runs as defenders pursue. He’s using both hands to secure the ball as he braces for contact while still trying to keep his legs moving as defenders swirl.

* Once again, the defense aligned in multiple fronts. There were some 3-4 looks with two overhang defenders, giving a 5-2 feel, with Jordan Davis at the nose flanked by Javon Hargrave and someone else on the other side of Davis. Fletcher Cox is still not fully practicing, giving reps to Marlon Tuipulotu and some others. There were also some nickel and dime looks. In those 4-3 situations, Davis played some 3 technique. Davis was disruptive and was in the backfield once or twice. He generally moved around well. One thing to monitor is Davis’ weight. Sirianni said Davis came to camp “ready to go” and Davis said he’s supposed to play at 330-340 pounds, but neither said exactly what Davis weighed upon reporting to camp.

* T.J. Edwards and Kyzir White continued to get the most reps with the first team. At one point, White was the lone off-ball linebacker in what appeared to be a dime formation. Nakobe Dean continues to run with the backups, which is typical of a third-round pick. Wouldn’t get discouraged about Dean not yet running with starters. Lots of camp to go.

* Brandon Graham stood out in 1 on 1s. The guy looks explosive and dynamic. Good for him. For those who appreciate updates from the bottom-roster competition, an undrafted outside linebacker named Ali Fayad – from Western Michigan – showcased some serious edge speed against some bottom-roster offensive linemen trying to block him.

* Cam Jurgens filled in for Jason Kelce again on the first team, as Kelce and Cox are progressing back fro Covid, but the best view I could get of the second-rounder came in 1-on-1s, where he had some good reps against Jordan Davis and some other interior defensive linemen. His athleticism stands out along with his ability to chop his feet and anchor to keep the rush in front.

I asked Jurgens if he had ever 1-on-1 blocked someone as big as Davis. I wasn’t expecting him to say yes, but he recalled matchups at Nebraska against an unnamed defensive lineman who Jurgens said weighed nearly 400 pounds.