Recipe For A Loss

The most recent Philadelphia Eagles loss resulted from a lack of offensive consistency and key lapses in coverage.

On the latest episode of the “Inside The Birds” podcast, Adam Caplan and Geoff Mosher provided the latest team injury updates and gave intel from Week 16’s All-22 film. 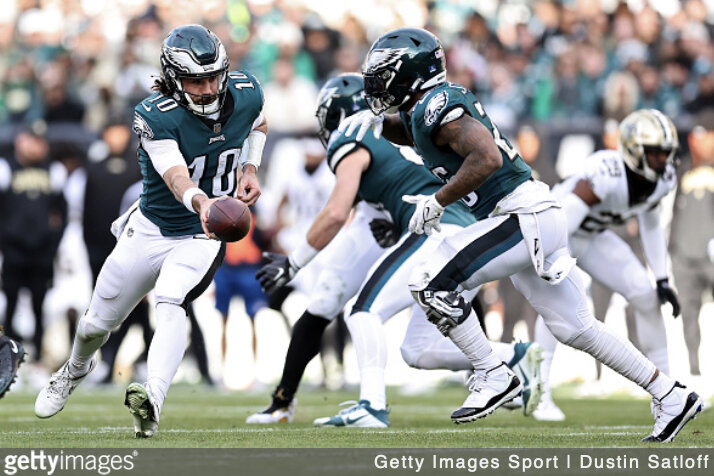 Adam Caplan: “From everything we’ve heard, he’s been good. Unless he has a setback, he should be taking a majority of the ones [in practice]. Later Wednesday is their walkthrough. Last week, he didn’t participate in the walkthrough. If he’s not taking the majority of reps in Thursday’s practice, that’s a different story. But based on what we know, this is the trajectory that they expected him to take.”

Caplan: “He was wearing a brace in practice. To this date, I don’t know exactly what the issue is, it’s on his left knee…Clearly, and (Nick) Sirianni admitted it on WIP, they wanted to be careful. We’ll keep an eye on that and see if he practices fully this week on Thursday and Friday.”

Geoff Mosher: “You do wonder if there’s anything that happened in the game that influenced decisions. The first offensive play for the Eagles, Gardner Minshew is sacked on a five-man rush and Miles Sanders, who has done a better job at blitz pickup, completely did not look functional on the blitz [pickup]. You wonder if maybe right then they decided, whether it’s his knee or whatever, we need to get other guys in the game who can be more functional than Miles.”

Caplan: “What we have heard is that the first playoff game is absolutely in play as of now. He’s just super sore. They’ll know in a series of days how he really feels. Everything checked out well.”

Mosher: “There were times where you could see from the All-22 that he kind of drifts out of the pocket more than stepping up to the pocket.”

Caplan: “I don’t know why he does this stuff. I think he perceives pressure, that’s the term coaches use, when it’s not there. Minshew stepped into the pocket and he would either walk near the lineman or walk away from the play where he couldn’t quite see what he needed to see. He’s a pure, rhythm pocket passer; he didn’t have any rhythm. Based on what we were told, the pass rush really got to his head and he was just not comfortable at all.”

Caplan: “If you keep going three-and-out, you’re not going to be running the ball very much. Then in the third quarter, they came out running like crazy, but then they’d have a bad snap or a penalty.”

Mosher: “I’m really conflicted on the first series. There were a couple of third downs the Saints converted to keep that drive alive. The Eagles did not play the same coverage on all third downs and they blitzed on one of them. Now I didn’t like that blitz at all – they dropped a lineman and blitzed T.J. Edwards. It didn’t work. But when I look at why those passes were all completed, the matchups favored the Saints. They put [Chris] Olave in the slot twice, he’s usually better than who he’s going against.”

Caplan: “They gave up the one bad play where (James) Bradberry got beat, the safety was not where he should have been. Other than that, the only thing was they were playing very soft in the first series. That’s why so many balls were completed. It was a bad first series, got overpowered, then they adjusted.”

Caplan: “Jordan Davis played early on quite a bit. He had one really good play where he used his length and didn’t get stood up. He actually made a tackle on it. The person I spoke with said he was pretty impressed with the way he used his hands. Was it always good? No, but you saw some improvement. His ankle was clearly much better.”