Eagles tight end Dallas Goedert is back on the team’s 53-man roster, just in time to play against … Dallas.

Goedert, who missed the past five games after suffering a Week 10 shoulder injury, was activated into the 21-day practice window last week after missing four games but wasn’t placed on the roster before Sunday’s 25-20 win against the Bears in Chicago. 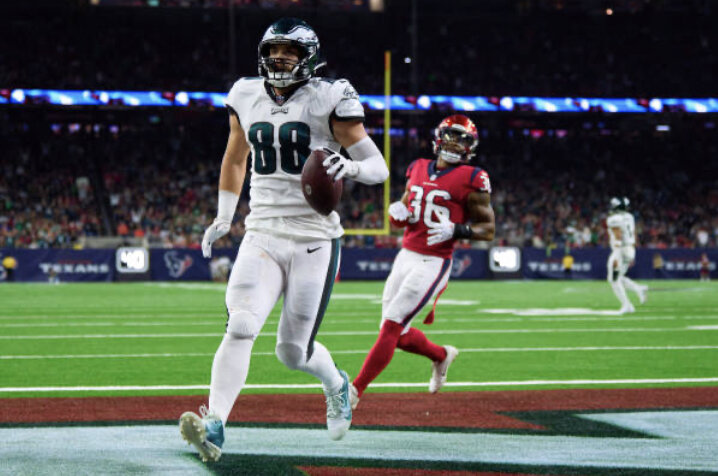 Eagles TE Dallas Goedert will return in time to play the Dallas Cowboys on Christmas Eve.

The fourth-year tight end should be ready to play Saturday afternoon against the Cowboys at AT&T Stadium, a prime-time showdown on Christmas Eve that could clinch the NFC East for the Eagles if they win.

The Eagles went 5-0 in Goedert’s absence, with Jack Stoll and rookie Grant Calcaterra mainly filling in, but they’ll welcome back one of their best overall weapons.

Goedert has 43 receptions for 544 yards and three touchdowns. He’s averaging more than 12 yards per reception and more than 10 yards per target.

With quarterback Jalen Hurts (shoulder) likely to be sidelined against the Cowboys, Goedert will again catch passes from backup Gardner Minshew, who last year threw touchdowns of 36 and 25 yards to Goedert as he subbed for an injured Hurts in a 33-18 win over the Jets at MetLife Stadium. Goedert led all receivers in that game with 106 yards on six receptions.