Sacks By The Stacks

The Eagles on Sunday reached another milestone following their 25-20 victory over the Chicago Bears, a triumph in which the NFC powerhouse registered six or more sacks for the third consecutive game for the first time in franchise history.

With 55 sacks through 14 games, the Eagles are on pace to shatter their franchise record of 62, set 33 years ago over the course of a 16-game season. 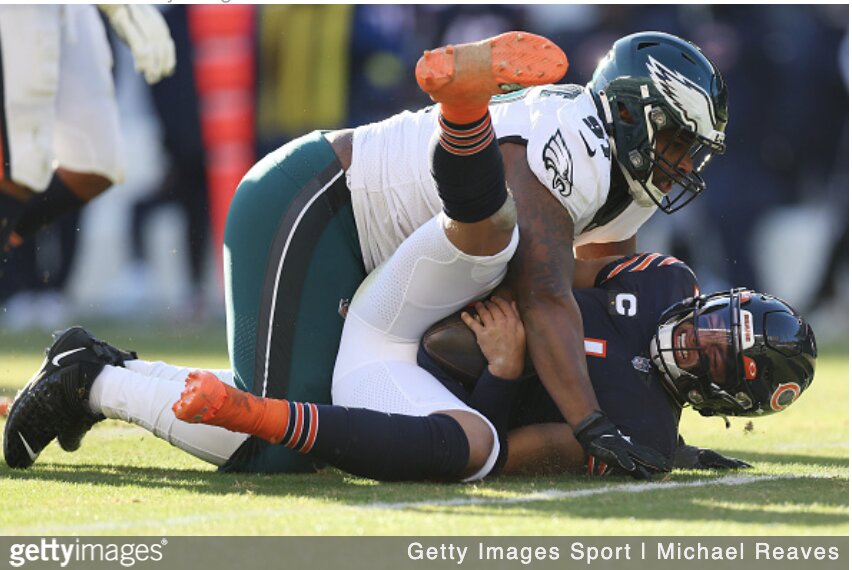 Hargrave’s drive-halting sack on 3rd-and-5 stymied the Bears’ first possession coming out of the break and brought his season total to 10, marking the first double-digit season of the 29-year-old’s career.

As for Sweat — who has produced sacks in five of the last six games — the ascending fifth-year pro is now within a half-sack of eclipsing the double-digit barrier for the first time in his career.

A week after racking up three sacks at MetLife Stadium, Brandon Graham was quiet, but he needs just 1.5 sacks over the remaining three games to venture into uncharted territory.

In spite of this, none of the aforementioned seems likely to challenge Reddick for pass-rush supremacy, as the Camden, N.J., native leads the team with 12 — his third straight double-digit sack total — despite being blanked the first two games of the season.

“Wash, T-Rock, they’re out there every day with us. They go out there early — they get out to practice before us — and whoever is willing to come get some extra work, they’re always there,” he said. “They’ve been doing a good job all year with helping us with the things that they see, giving us the game from an offensive perspective.

“Rock, just keeping it real [and] being who he is; Wash, he’s the one who gives us the game from an offensive perspective. We take all the coaching, we take our talent, we go out there on the field and then we let it shine.”

As Chicago reclaimed possession at the Eagles’ 25-yard line following an interception by safety DeAndre Houston-Carson, it appeared the tides were shifting as the Bears sought to extend their three-point lead.

Facing a 3rd-and-16 at the Philadelphia 20, Reddick blew past Bears right tackle Alex Leatherwood and bore down on Fields before he could get the pass off, dropping the second-year quarterback for a 10-yard loss.

The Bears punted, and the Eagles proceeded to march on a nine-play, 86-yard scoring drive, which culminated in a Jalen Hurts 22-yard touchdown scamper to put the Eagles ahead.

In retrospect, the Reddick takedown might have served as a catalyst to seizing control over a vastly inferior opponent, with the high-flying Eagles offense unusually grounded and unable to generate momentum.

“You always want your defense and offense both playing well,” Reddick acknowledged. “But to say it was vital, as if we had to pick up the offense or something, it wasn’t that. As a defense, we simply try to control what we can control. We can’t do nothin’ about what the offense does. Whether they’re putting up points, they’re not putting up points, that’s not our problem.

“Our problem is to go out there, no matter what happens, and try to keep them from scoring points. And we keep that mentality; we never worry about what our offense does. Every time we touch that field, it’s just going out there and trying to be the best 11 individuals that we can be when we’re on the field.”

While the offense produced in critical moments on an unrelentingly frigid afternoon at Soldier Field, Sunday’s win was the byproduct of complementary football. This time it was the defense answering the bell, essentially atoning for the offense’s second three-turnover outing of the season.

In addition to notching six sacks, coordinator Jonathan Gannon’s unit held a resilient Chicago offense to just 248 net yards, 5-for-13 third-down efficiency (38.5%) and forced three fumbles — one of which was recovered by Reddick.

However, on a day when the Eagles’ defense enabled the team to rescue a win and improve to 13-1, it was Reddick — maybe the NFL’s most underappreciated sack artist — who most stood out.

The Eagles’ sack leader collected four tackles (one for loss), two quarterback hits, a pass defended, a forced fumble, a fumble recovery, and a pair of sacks.

The 28-year-old pass-rusher — on his third team in as many years — signed a three-year deal in March at the dawn of free agency and appears poised for a career season of his own.

Still, while the home run of free agency has consistently proven to be scheme-proof and is playing his best football, league-wide recognition continues to elude him.

But when asked to what he attributes his success in Philadelphia, Reddick was quick to credit those he works alongside every day.

“I can’t sit here and say it’s the scheme,” Reddick said. “I’ve done it in three different schemes. But my coaches here, man, anything I’ve asked ‘em — talking to J.G. — he listens to his players.

“Even today, coming on the sidelines, he’s asking us, like, ‘What do y’all want me to call? Is there anything that I should call? What are y’all feeling?’ And that’s a great feeling to have.”