ITB: Hurts 'Hit Too Many Times' Vs. Bears

Despite three turnovers and an uncharacteristically unbalanced offensive performance, the Philadelphia Eagles held on Sunday to beat the Chicago Bears, 25-20 at Soldier Field.

On the Week 15 edition of “Inside The Birds Postgame Live,” Adam Caplan and Geoff Mosher were joined by Eagles Hall of Fame offensive tackle Tra Thomas to recap the victory. 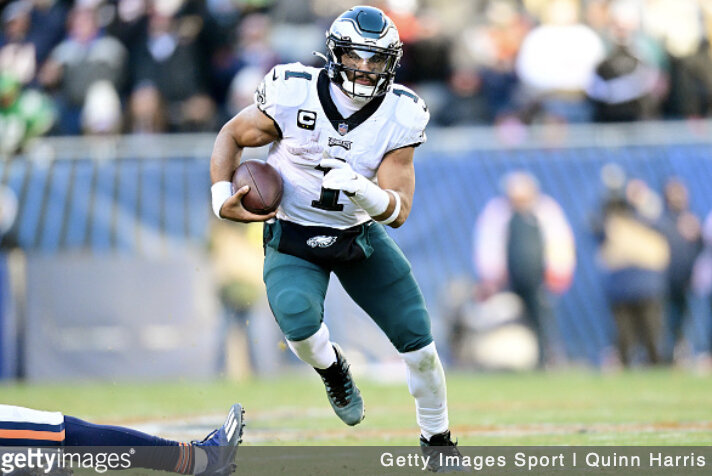 Eagles QB Jalen Hurts was the biggest factor for the Eagles run game against the Bears, carrying the ball 17 times for 61 yards and 3 touchdowns

Geoff Mosher: “On the first interception, Jalen was not throwing with the right type of timing that we’ve seen. The second one might have been just as much on Quez Watkins because Jalen threw it to a spot that he thought Quez was going to be at.”

Mosher: “I can’t even remember a game during the Andy Reid era where there’s 12 minutes left in the second quarter and that’s the first time a running back gets a carry. It almost seemed too cute. I get it, you come out passing and try to get ahead, but for no running back, especially with Miles Sanders coming off of a 144 yard game, against a defense that is among the worst against the run, to not have a carry until 12 minutes left in the second quarter, I felt like the Eagles were overdoing it a little bit there.”

Tra Thomas: “I’m going back to the zone-read concepts. Chicago’s defense was playing them for it. What Jalen was seeing was the defensive end crashing down, that’s his read. Now, there are a couple times where you just have to say it doesn’t matter what the read is, just hand it off. But what Chicago was doing was crashing that defensive end and have the linebackers come over the top, they were going to make you not hand the ball off so they could get hits on him.”

Adam Caplan: “If you want to throw the ball a lot, that’s fine because the Eagles do it better than most teams. But when you run it, could you give it to Sanders more? It’s just asking for trouble with your QB…We’re OK with running the football with Hurts, but when he’s getting more carries than Miles Sanders, I have a problem with that. Hurts got hit too many times today. You want to go back to getting Sanders the ball more.”

Thomas: “Haason Reddick is just an animal out there. Once he got to the Eagles, that’s when I really started paying attention to his style of rush. A lot of people were talking about his size, but it plays into his advantage. As a tackle, when you have a defensive end that can flash hands but then can get low and bend the corner, it makes it extremely difficult. He was working these tackles. He bends like no one else out there on that field.”

Caplan: “Reddick is almost unstoppable on stunts. He’s so quick with his second reaction. The backbreaking run that Justin Fields had, that was the one where he had a second reaction rush. He beat the tackle, went to the ground, got up and nearly got him. He’s relentless. I have not seen anyone with this kind of speed as an edge rusher for the Eagles maybe ever. It’s hard to find guys like this.”

Mosher: “It’s amazing how the little things make such a difference. You call up Christian Ellis three straight weeks, you’ve had pretty good kickoff coverage. You get Boston Scott returning your kicks, all of a sudden you now have way better field position. You get a two-time Pro Bowl punter, he didn’t do anything wrong. It was another clean game other than the missed PAT from Jake Elliot, which I think the process was fine on it.”

Caplan: “That Boston Scott return, did you see how much room he had? They were really blocking much better for it. Now, they did have two bad coverages: one bad punt and one bad kick, so that reared its ugly head again.”