Over the past few weeks, the 12-1 Philadelphia Eagles have been almost impossible to stop on both sides of the ball.

On the latest episode of “Inside The Birds,” Adam Caplan and Geoff Mosher discussed the latest transactions and shared sourced All-22 review of the film from the team’s 48-22 win over the New York Giants. 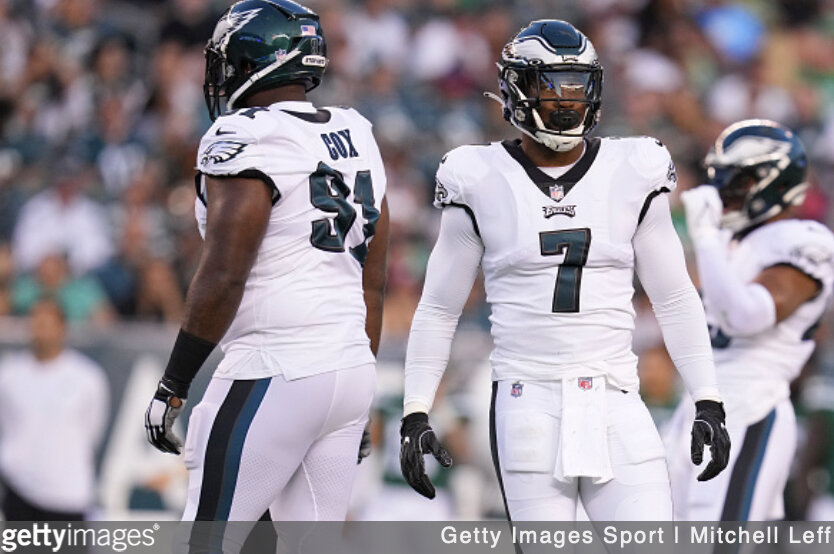 The addition of Haason Reddick has been as good as advertised, with 10 sacks so far on the year and constant pressure on the QB

Geoff Mosher: “With two Pro Bowls, you can make a very good argument that he’s actually a better punter than Arryn Siposs. By putting him on the practice squad, you now can use him for three weeks just through elevations and it gives you an extra spot on your active game day roster.”

Adam Caplan: “He had an opportunity to sign with the Bills. He declined to do it at the start of the season. He wanted to wait…Siposs is out for the rest of the regular season, by rule. This is the way I see it: if Kern is close to where he was, there’s no reason to think he won’t be the punter, even when Siposs is healthy.”

Caplan: “He’s probably one of the best timing/spot throwers in the National Football League right now. This game, almost every throw was a timing spot throw. He is so good with timing, I thought this was his best game doing it. This past game, he had a bunch of throws that were away from the defender and made the pass target go get it. That’s high-level quarterback play.”

Mosher: “I felt like he was in the zone at some points, every dime he was throwing. He looked like Drew Brees with wheels in the first half. Little precision throws and then he could run if he needed to. It was very impressive.”

Caplan: “He beat the defense before they could set up. There are some plays where it didn’t matter if the offensive line could block for him. He’s so smart, now. Jalen sees it before it happens, he’s anticipating the coverage, he knows it from tape study. You wonder what he can do better; there’s not much he can do, he’s so good right now.”

Mosher: “He is among the leaders in yards without contact, but I also think that’s a little bit misleading, making it seem like he’s just running through canals…he gets skinny through the hole really well.”

Caplan: “I have a hard time believing they were graded any better than this game. They’re very good every game, but this was worldly. They knew the Giants were going to blitz a lot, they knew the type of overloads, and they picked it up and they stoned them. It was a masterpiece, totally synchronized, double teams were outstanding. On All-22, you could see how much energy the offensive linemen had after a play.”

Mosher: “The bigger point on how they played was they were so synchronized, so on cue, and so disciplined a week after they committed 12 penalties at home. The week after when you go on the road against a division team known for throwing a bunch of bodies at you, as a unit you were calm, collected, and did your job. I thought that was a really important bounce back.”

Caplan: “The tape was just absurd. He was relentless. Nobody moves like him. He was primarily lined up over Evan Neal. He just moved too fast. Cox’s sack was a result of Reddick’s pass rush, he made Daniel Jones move right into him. This was Reddick’s best game as an Eagle. They had no answer for him. They should have chipped him, but I guess they were probably worried about what they were going to do with (Josh) Sweat on the other side.”

Mosher: “Somebody put me on to watching his tape and told me to pay close attention to his hand usage, not necessarily always against the tackles, but also when he gets towards the QB. Some pass rushers get there and are trying to flatten the QB with a sack or tackle, he’s really good at poking the ball and getting his hands in ways to make the QB have to drop their hands and not complete their pass.”

Caplan: “B.G. was such an edge rusher in this game. The way they align him, he doesn’t have to run side to side, he just takes five steps and he’s in the face of the QB.”

Mosher: “He was kind of the cleanup hitter in this game, meaning some people set up the sacks for him, nicely.”