Miles Sanders realized the magnitude of his career afternoon only after time had expired on the Eagles’ 48-22 dismantling of the NFC-East rival New York Giants.

The fourth-year running back, who carried 17 times for 144 yards and two touchdowns Sunday at MetLife Stadium, eclipsed the 1,000-yard rushing barrier for the first time in his career, becoming the first Eagles running back to achieve such a feat since LeSean McCoy in 2014.

“It’s a blessing,” Sanders said after the game. “I gotta give all credit to God, hard work, my o-line, of course, and Coach [Jeff] Stout[land]. But ain’t done yet. It’s a great accomplishment, long time comin,’ but we ain’t done yet.” 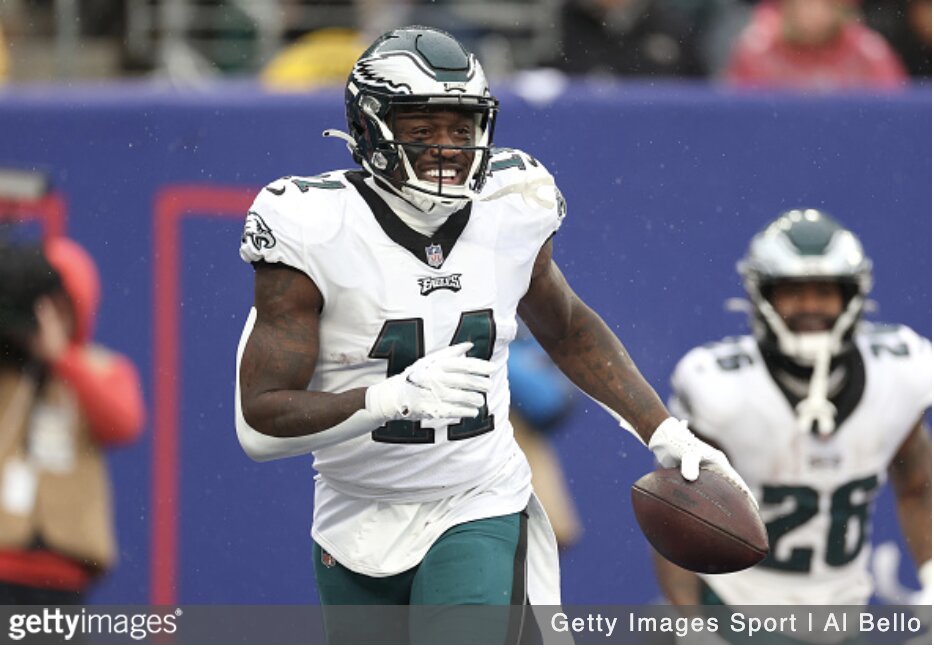 Eagles stars A.J. Brown and Miles Sanders each eclipsed 1,000 yards vs. the Giants in a blowout win.

In reality, Sanders attained the benchmark on his 12th carry  – with 3:44 remaining in the third quarter – while accelerating through a crease on the right side for a 15-yard gallop down to the Giants’ 23-yard-line.

His milestone mirrored what he’s showcased all season — patience, power, decisiveness – but it’s been consistency that has fueled the 25-year-old’s ascent to one of the premier players at his position.

As a result of the past 13 games, the narrative surrounding Sanders has been rewritten, and his career trajectory has been radically altered.

The concerns about his scarce availability, inefficiency playing through contact, and churning out tough yards between the tackles have been rendered null and void.

It was only five months ago that the once-polarizing 25-year-old entered training camp incredulously facing an uncertain future, having played in just 12 games in each of the past two seasons and failing to reach the end zone in 2021.

It became apparent early, however, that his steadfast determination and a seemingly renewed focus would fuel Sanders’ approach during a contract season.

“I didn’t really change much,” Sanders revealed. “It’s all mindset. My mindset changed, and my demeanor changed, and I just focused on more of the important things and what I need to do to stay healthy. I’m in the training room sometimes when I don’t even need to be in there, just to keep my body right. And it’s been working.”

Prior to Sunday’s offensive outpour, Sanders averaged 77 rushing yards per game and sported a hefty 4.9 yards per attempt. His two games of 100-plus rushing yards this season – against the Jaguars and Packers, respectively – already equaled his totals from a season ago with five games remaining on the slate.

After turning in a career performance and achieving a personal best amid the inclement confines of MetLife Stadium, Sanders – now the NFL’s fifth-leading rusher (1,068) and tied for third in rushing touchdowns (11) – inevitably shared the limelight with another member of the Eagles’ high-flying offense, who reached a threshold of his own.

With 4:20 remaining in the third, quarterback Jalen Hurts completed a 9-yard pass to A.J. Brown, setting up a 3rd-and-1 and the New York 38. The reception put Brown at 53 yards on the afternoon, three more than he needed to reach the 1,000-yard receiving mark with four games remaining in the regular season.

To further illustrate the significance of Sanders’ and Brown’s 2022 campaigns, the running back-receiver tandem became the team’s first to attain 1,000 yards apiece, respectively, while also producing 10 touchdowns apiece in almost 25 years – since the Ricky Watters-Irving Fryer tandem in 1996.

“Pretty big deal,” Sanders acknowledged. “I think it’s the first time since, I-don’t-know-who. It’s a good thing. Good thing for the team, good thing for the organization. It’s a key to us winning all these games. And as long as everybody keeps doing their job, I don’t think anybody can beat us.”

While more accolades are sure to follow, Sanders – staying true to the locker room’s unwavering mantra – remained focused on the bigger picture.

When asked what meant more to him, the yardage or touchdowns, his firm, albeit brief, response was the ultimate indicator: “Super Bowl.”