‘It’s How You Respond’

PHILADELPHIA – A stylish magenta suit adorned Jalen Hurts as he took the podium minutes before midnight.

The ever-stoic 24-year-old quarterback, who was among the last players to vacate the Eagles’ locker room Monday night, promptly began answering questions in the wake of the team’s first meaningful loss since last January.

“It was just an overall lack of detail and execution,” Hurts said after the game, a 32-21 Eagles loss to the Washington Commanders, the Eagles’ first loss of the season. “Today it got us. 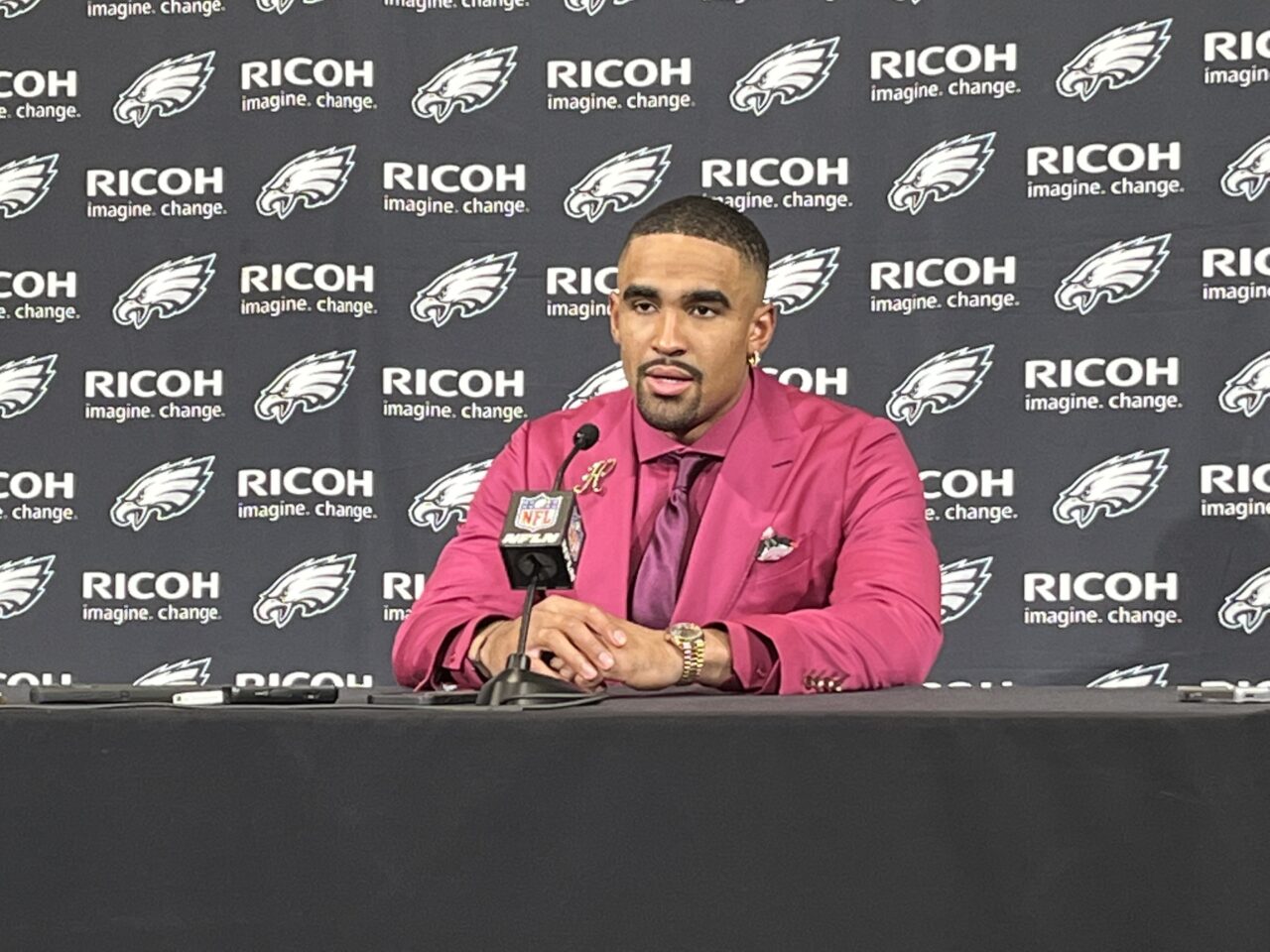 It’s no surprise the Eagles’ general, who had only weeks earlier proclaimed he was “born for the storm,” appeared undeterred less than an hour after losing for the first time this season.

No excuses were offered, convenient as they could have been, as Hurts placed the onus squarely on the team’s collective shortcomings. He asked teammates to embrace a “so what, now what” mentality.

He also emphasized the importance of focus on things that can be controlled. And as he usually does, Hurts remained steadfastly fixated on the mission and big picture, concluding his conference with: “I think in the end, it’s about how you respond – regardless of what’s in front of you.”

The NFL’s frontrunner for league MVP entering Monday night’s tilt, Hurts completed 17-of-26 pass attempts for 175 yards and two touchdowns to go along with an interception — his third – and recorded a 94.2 quarterback rating.

Hurts also contributed 28 yards and a touchdown as a runner, his seventh of the season.

That isn’t to suggest Hurts was without flaws and absolved of culpability. Washington parlayed Hurts’ second-quarter interception – a double-coverage heave intended for wide receiver A.J. Brown – into a 16-play, 86-yard drive, culminating in a 1-yard Brian Robinson touchdown plunge that supplied a surging Commanders team a lead they would not relinquish.

Hurts also missed a pivotal checkdown to running back Kenny Gainwell on a 3rd-and-8 with 2 minutes, 49 seconds left in regulation, instead stepping into a sack that ultimately nullified an Eagles comeback.

His ball placement was also uncharacteristically off target on a handful of his 26 attempts.

Another complicating factor was Washington’s decisive time of possession – 40:24 to 19:36 – consequently making each possession all the more precious and reducing the margin for error.

Still, despite his imperfections, with the game hanging in the balance, Hurts positioned a self-destructive offense to drive the length of the field for the go-ahead score in the waning moments of the fourth quarter – twice.

When the offense seemingly had the Commanders reeling with 9:14 left in the final frame, it was tight end Dallas Goedert who coughed up the football at the Philadelphia 33-yard line while simultaneously being yanked down by a rather blatant facemask tug.

Commanders linebacker Jamin Davis recovered at the 34-yard line, and Washington ultimately converted its fortunes into a Joey Slye 55-yard field goal to increase its lead to 26-21 with 7:33 to play.

“I think tonight we weren’t doing that at a high level. Today it got us. It doesn’t get you until it gets you, and today it got us. We learn from it and we move forward.”

On the ensuing possession, the offense seemingly rectified an egregious Landon Dickerson holding penalty with a 50-yard strike to a wide-open Quez Watkins that would have set the offense up at the Washington 23.

But this time it was Watkins who fumbled to the opposition, awarding the Commanders possession at their own 27.

“Honestly, I was just trying to make a play,” Watkins said after the game. “I know I didn’t get touched and I knew I had left him behind, so I just wanted to get up and get some extra yards.”

In failing to make adjustments and avoiding the costly turnovers that earned them the distinction of leading the league in turnover differential at plus-15, the Eagles provided an inferior, albeit hungrier team, every opportunity to pounce and seize control.

While Monday night’s loss officially puts the undefeated season discourse to rest, the remaining slate of games offers an opportunity to reset, grow, and forge ahead in pursuit of their ultimate goal.

Fortunately for the Eagles, the short week presents them an opportunity to hastily flush out the unfamiliar feeling and turn their attention to the Indianapolis Colts, Sunday’s 1 p.m. opponent at Lucas Oil Stadium.