The Eagles (7-0) are in Houston, Texas, tonight for a “Thursday Night Football” tilt against Texans (1-5-1) at NRG Stadium.

To achieve its first 8-0 start in franchise history, the high-flying Eagles must avoid complacency and contend with a resilient Texans team eyeing a bounce-back performance following a dismal showing against a divisional foe.

While the Texans boast a record that suggests ineptitude and dysfunction, their young roster features a host of building blocks, including running back Dameon Pierce, cornerback Derek Stingley, and safety Jalen Pitre.

The Eagles have compiled a 5-0 all-time record against the Texans, one of just two NFL franchises that has never beaten the Eagles. They’ll look to extend that streak while simultaneously venturing into uncharted territory.

Let’s take a look at four players poised to make an impact on Thursday night: 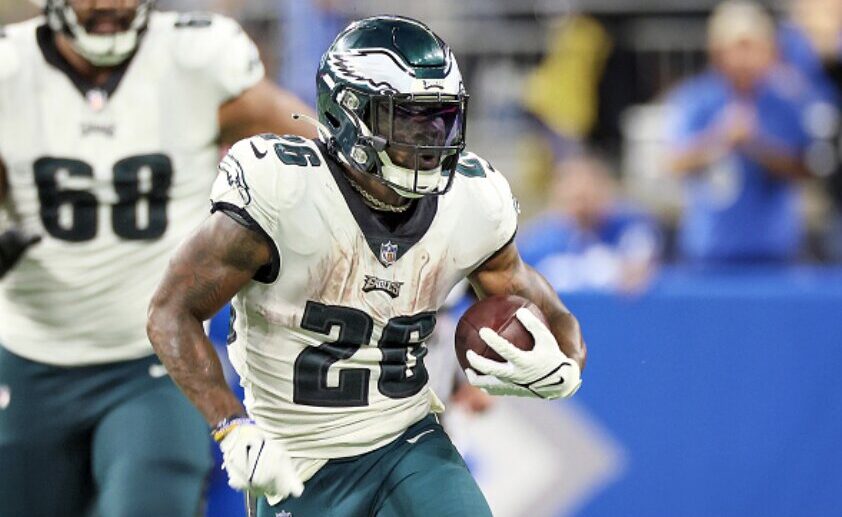 RB Miles Sanders: The Texans have allowed a league-worst 1,302 rushing yards and are allowing an astounding 186 rushing yards per game. Their 5.6 yards per carry is second only to the Los Angeles Chargers (5.7). With the Eagles returning from a short week and likely wanting to shorten the game ahead of an 11-day layoff, look for the Eagles to implement a run-heavy game plan that emphasizes Sanders. I wouldn’t be at all surprised if Sanders eclipsed the 100-yard rushing barrier and found the end zone twice for the second time this season, reminiscent of his Week 4 outing in monsoon-like conditions, when the fourth-year running back accounted for 134 yards and two touchdowns.

SAM Haason Reddick: A lopsided affair should force a run-centric Texans team to take to the air earlier than they’d like, which is where the Davis Mills-led offense could unravel. The second-year quarterback has been sacked 16 times through seven games and his six interceptions are tied for fifth-most in the NFL this season. I envision a scenario where Mills holding onto the ball too long in the second half in an attempt to make a play allows Reddick – who leads the Eagles with 5.5 sacks, four of which have come over the past four games – to make his presence felt. The same Texans offensive line that was just under siege four days ago, surrendering three sacks, eight tackles for loss, and six quarterback hits to the Titans, should have its hands full attempting to stave off an unrelenting Eagles pass rush.

RB Dameon Pierce: At his current pace, the Texans rookie should find himself among the leading contenders vying for Offensive Rookie of the Year consideration. The Texans’ offense literally runs through Pierce, who ranks sixth in the NFL in attempts (121) and 12th in rushing yards (539) going into Thursday night. Showcasing a powerful, decisive running style, battering through the teeth of defenses and leaving defenders in his wake, Pierce could potentially find some early success between the tackles while the game remains remotely competitive – however long that may be.

CB Derek Stingley Jr.: Seven games into his career, the rookie defender has acquitted himself well on the island, accumulating 40 tackles, five passes defended, a sack, and an interception. Stingley is just one of two rookies to log 200 coverage snaps and not allow a touchdown thus far. Stingley’s streak could be in jeopardy Thursday night, however, when he’ll presumably tangle with Eagles wide receiver A.J. Brown. Coming off a career performance against the Steelers in which he reeled in six receptions for 156 yards and three touchdowns – all in the first half – Brown figures to predominately draw Stingley in coverage in a highly anticipated matchup.