‘Must Be Major Factor’

With the undefeated Philadelphia Eagles on a bye, the team now enters evaluation mode to see what’s working and what isn’t.

On the latest episode of the Inside The Birds podcast, Adam Caplan and Geoff Mosher reviewed the team’s performance over the first six games and discussed potential improvements. 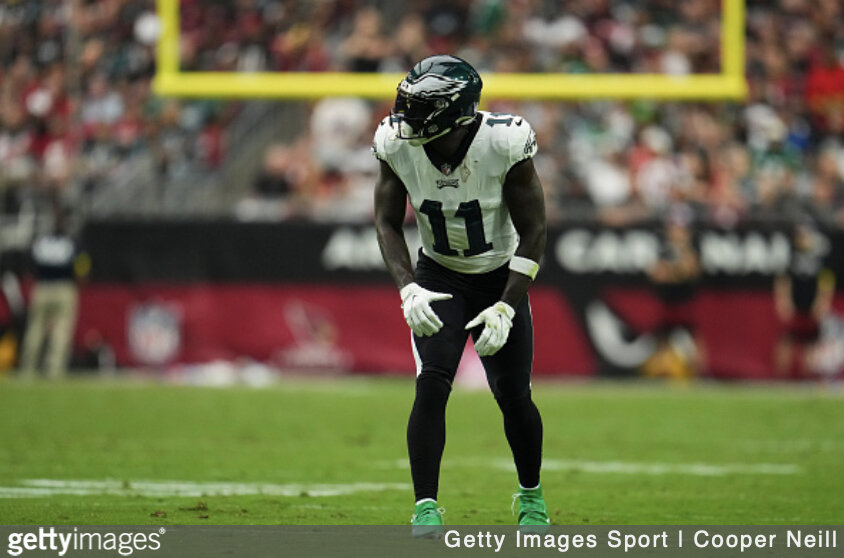 AJ Brown has stood out through six games, but can reach his full potential as a Philadelphia Eagle with a gameplan centered around his talents.

Adam Caplan: “To me, A.J. Brown has to be a major factor every week. No one can handle him. As a play caller, you just have to know, ‘I’m getting this guy the ball every week in a major week because he’s un-coverable.’ (Dallas) Goedert is the same way. In the end, lack of predictability is going to come into play here. Shane Steichen has done a good job of spreading it around, but if you’re going to throw the ball over 30 times a game, A.J. Brown has to get the ball a ton. What John DeFilippo says is you have to identify your playmakers and have an understanding of what each guy does.”

Caplan: “One stat that I think is a little bit alarming: (Kenneth) Gainwell had 50 targets last year, he is well on his way to not even come close to that. That has to change. He is explosive in the pass game, at least he was in college. They’ve had two games where (Miles) Sanders had three catches. There’s been no dominance in the pass game from running backs, I’m a little surprised by that.”

Geoff Mosher: “I agree with you. This is the year that Miles Sanders has put everything together, he’s even catching the ball fairly well. He’s been targeted 13 times and has 11 catches. Getting Sanders a little bit more into the intermediate passing game and wheel routes, trying to get him downfield past the linebacker occasionally, would be a wrinkle they haven’t shown yet.”

Caplan: “The kicker and punter are in decent shape…I’d like the kickoff returns to be better…I would look into kick returners, I have not heard that they’re doing that…the coverage team, (Nick) Sirianni can say what he wants about where they’re ranked, but it seems like there’s a gaffe almost every game.”

Caplan: “James Bradberry might be one of the best corners in football. It’s not just the stats that show he’s not giving up anything. I understand he was not comfortable in the former scheme with the Giants, but they’re using him the right way here.”

Caplan: “They’re in the middle of the road on blitz percentage. I liked when he went after (Carson) Wentz in Week 3. He smelled blood and they went after him. He has to be better at smelling blood. When you see a guy struggle, come after him.”

Caplan: “If you’re Fletcher Cox and you played a Wide-9 a lot of your career, you played a certain way and you’re not doing it anymore, it’s hard mentally. This is a combo of read-and-react and at times get upfield (defense). That’s not easy if you’ve been playing a certain way your whole career.”

Mosher: “You wonder what will become of Fletcher Cox after this year. It’s not that he’s playing poorly, it’s just sort of inconsistent. Sometimes, he really wows you with what he puts on tape, and there are times where he doesn’t look like a Pro Bowl defensive tackle.”