They Can Go For Miles

In their toughest challenge of the season, the Philadelphia Eagles overcame pouring rain, injuries, and an early 14-0 deficit to defeat the Jacksonville Jaguars, 29-21, and remain undefeated.

On the Inside The Birds Week 4 Postgame Show, Adam Caplan and Geoff Mosher were joined by Eagles Hall of Fame offensive tackle Tra Thomas to break down the win. 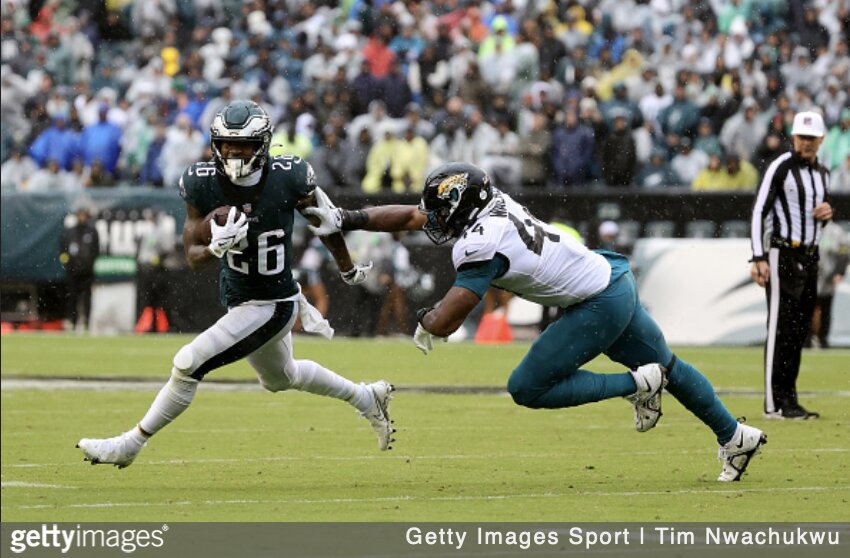 For the first time all season, the Eagles leaned heavy on the run game, giving Miles Sanders a career high 27 carries for 134 yards and 2 TDs.

Adam Caplan: “Mentally tough and resilient: that’s the headline for this game. When they were down 14-0, whatever could go wrong went wrong. [Jalen] Hurts throws a pick behind the intended pass target, they’re down 14-0, it looks bad, but they are so mentally tough. I got to give them credit, (Nick) Sirianni for going for 4th-and-1s or 4th-and-shorts and the defense hanging in there.”

Caplan: “Hurts clearly didn’t have a very good game, but he made throws when he had to and other than the pick, he didn’t fumble the ball like the quarterback on the other side did.”

Geoff Mosher: “To me, that was the difference. They devoted themselves to running the ball and once they did, it did not look like Jacksonville, even with their athletic front seven, could stop this Eagles running game.”

Tra Thomas: “That’s one of the things that Coach (Jeff) Stoutland spends a lot of time on: being able to get guys out there and work those combination blocks and get guys up to the second level so that you could run the ball. You look at what Miles Sanders was able to do, there weren’t a lot of big home runs, but it was just constantly chipping away, especially when you had a defense that was number one coming into this game only giving up 55 yards a game, and then now you finish with 200-plus in a game. That’s just a testament to a lot of the work Coach Stoutland puts in when it comes to combination blocks and making sure guys are ready to play.”

Caplan: “By the way, Sanders was their four-minute back, which was really important because they’re searching for that guy. He ran extremely well.”

Thomas: “Haason Reddick just went out there and had his way with these offensive tackles with just simple bull and go moves. Reddick goes out there and has two sacks and two strip fumbles. Fletcher Cox falls on one. I thought the Eagles started playing with a little fire under them.”

Caplan: “Their depth now at left tackle is completely shot. Roderick Johnson’s on the practice squad, he’s a stopgap guy. At this point, you’re not going to get someone who’s accomplished. We’ll see what happens when (Andre) Dillard gets back in the second half of the season. I know (Darius) Slay was talking in the locker room [after leaving with a back injury], I hope he’s OK. (Isaac) Seumalo hurt his ankle. They have to get as healthy as they can. It’s going to be a challenge for them this week to get guys ready.”

Thomas: “At first, [left tackle] looked uncomfortable for him because you could tell he spent most of his time on the right side, but then I was quite impressed a couple of times where he was able to sit down on the bull rush. But then, there were times where it just happens because you’re so used to being on one side, and when you get bull rushed, you drop that inside foot and when that happens, it creates a lane to the QB. That’s what happened one time where he dropped that inside foot and he gets tangled up with Hurts: boom, sack. But I think overall, being someone that was all of a sudden thrown into the fire, and I know he hasn’t taken any live reps on the left side, he did a solid job.”