Waiting In The Wings

The annual dawn of training camp is typically marked by players rotating in and out of lineups that showcase various configurations, with the depth chart often giving the impression of a proverbial changing of the guard.

Last Friday was no exception at Eagles training camp, when second-year running back Kenny Gainwell garnered first-team reps while Miles Sanders, the incumbent starter, worked predominately with the second team.

The attention on Sanders inadvertently overshadowed the significance of Gainwell’s impression on the coaching staff, and while no one expects the Eagles to readopt last year’s run-heavy blueprint, the former Memphis standout appears primed for a larger workload in Year 2.

To make that sophomore leap, however, Gainwell must improve in pass protection – the crucial developmental area for most young running backs. 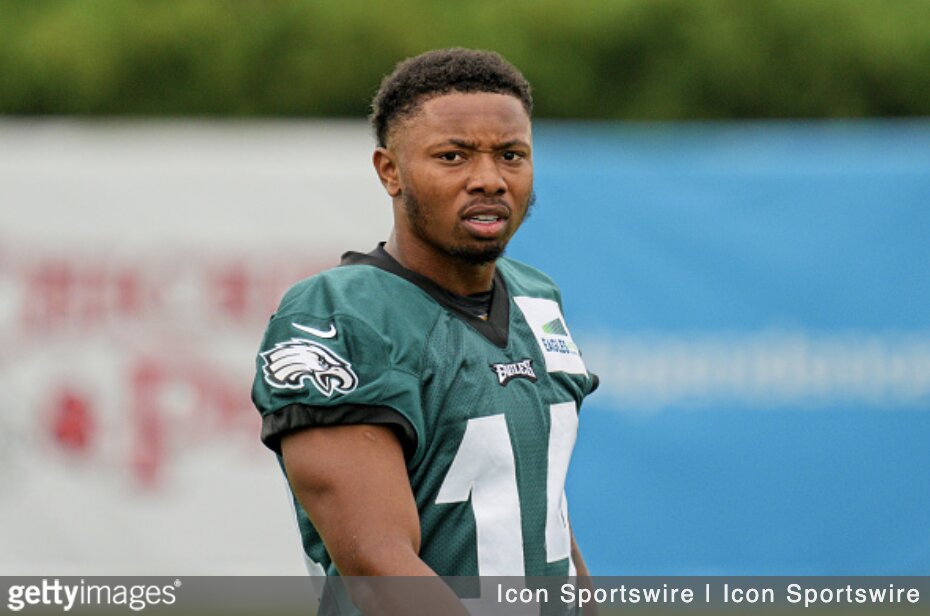 RB Kenneth Gainwell is ready to undertake a bigger role in Year 2, even as the top backup

The Eagles’ backfield could benefit from a legitimately lethal 1-2 punch consisting of the multifaceted Gainwell and home-run hitter Sanders, if Gainwell can refine his pass blocking to complement his receiving prowess, tough interior running, and situational awareness.

The compactly built 5-foot-9, 200-pound Gainwell has seemingly seen his role expand in the passing game early in training camp, where he’s aligned in the slot at a higher clip.

When split out, Gainwell should have more opportunities to create in space and capitalize on his short-area quickness and savvy route running, while also serving as an essential outlet for quarterback Jalen Hurts.

Comparatively, I’d liken Gainwell’s 2022 upside to that of Colts running back Nyheim Hines, who in 2020 amassed a career-high 482 receiving yards and tied a career-high in receptions (63) under then-Indianapolis offensive coordinator Nick Sirianni.

“I’ve been doing that all my life,” Gainwell acknowledged. “I played quarterback in high school, but I also played slot – I played that position in college. I mean, I feel comfortable each and every spot on the field.

“So, I’m taking advantage of my opportunities and whatever come toward me, hey, I’m gonna take my footsteps and go. And take advantage of it.”

Despite carrying the ball just 68 times for 291 yards for five touchdowns and reeling in 33 receptions (50 targets) for 253 yards and a touchdown, the Eagles have doubled down in its support of Gainwell by neglecting to pad the position via free agency or last April’s draft.

“I think any time from Year 1 to Year 2 you want to see that jump and that growth, and you can see it on the practice field,” Steichen said. “Just the understanding of how we want to run things in ball handling, in the run game and in the pass game. Just how to set up defenders coming out of the backfield. He’s learning and he’s doing a good job.

Limited usage aside, Gainwell provides a diversified skill set to a relatively uninspiring running back room.

Though hardly billed as a quintessential power runner, Gainwell is armed with the requisite lower body power to surge forward and pick up tough yards and the most natural receiver of the three running backs expected to make the Eagles’ 53-man roster.

In spite of this, Gainwell understands his role as Sanders’ current backup and prominent utility player, and he, along with his position group, has high expectations.

“I know Miles – he put on a lot [of muscle],” Gainwell said. “I can see it in his arms and legs. He put on a lot of good strength. He came into this year ready to ball, ready to do his thing. I can just see it.