Yes, the Bucs have Tom Brady, and that simple fact alone made them more likely than not to come out of Sunday’s NFC Wild Card game with a victory in their home, Raymond James Stadium.

But the difference between defending Super Bowl champion Tampa Bay and the Eagles, who were grossly outclassed in a 31-15 loss to the Bucs on Sunday in Tampa, extends beyond the caliber of quarterback, although it sure helped.

They turned the ball over less. They took the ball away more.

You never saw Dallas Goedert wide open in the end zone the way Rob Gronkowski was for Tampa’s third touchdown. You never saw holding penalties and personal fouls flustering the Bucs the way they did for the Eagles.

You never saw Bucs punts and punt returns shanked and muffed the way you saw the Eagles do. You didn’t see the Bucs best wide receiver endure long stretches without the ball finding his hands the way that happened for the Eagles.

For the Eagles to have won Sunday, they would have needed to play a perfect game. They didn’t. From from it, actually. 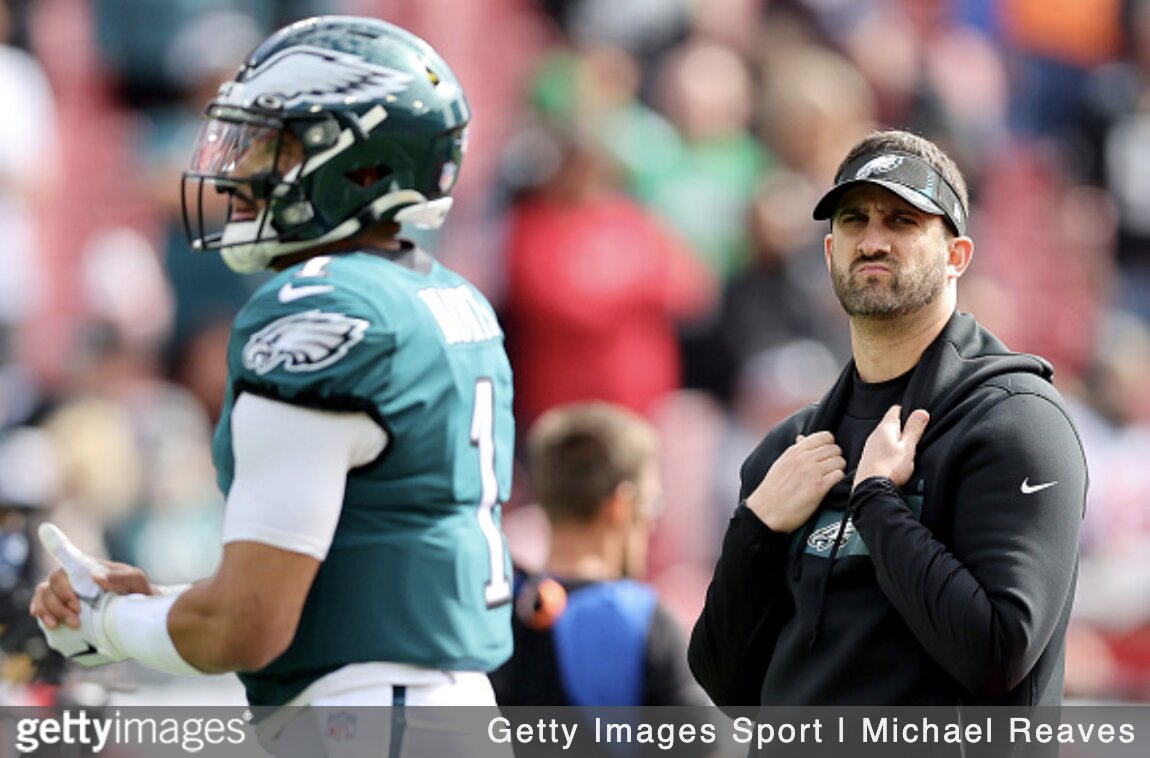 If the Eagles weren’t buried when the Bucs went up 17-0 in the second, they were surely shipwrecked after Tampa Bay took a 24-0 lead in the third.

The fact that the Eagles weren’t even competitive tells you their coaches and upper management need to take a long, hard look at the roster this offseason and not be conned into thinking that the team’s 7-3 finish – largely against teams that couldn’t sniff the postseason – guarantees future success.

The Eagles need to be honest in their evaluations when they determine the formula for making sure 2022 is another step toward Super Bowl contention and not headed for regression.

Winning seven of 10 games is no small feat, especially for an Eagles team that won four games in 2020 and entered the year with sparse expectations, but there can’t be any assumptions about the level of overall talent on the 53-man roster after this embarrassing loss that essentially backed up the national opinion that the Eagles didn’t belong on the same field with the defending Super Bowl champs.

Against teams that finished .500 or better in 2021, the Eagles managed just one win in seven games – six games if you throw out the season finale in which the Eagles rested starters against Dallas’ first string.

“Bully ball” became their mantra as the Eagles rolled up the league’s top-ranked rushing offense but the Bucs were hardly intimidated, holding the Eagles to an average of under 3.5 yards per carry until a garbage-time Boston Scott 35-yard touchdown run.

So much for the 1-2 punch of Miles Sanders and Jordan Howard. Sanders, just back from a broken hand, managed 16 yards on seven carries – 14 on one carry. Howard, who had plenty of rest, never once toted the ball.

On defense, the Eagles capitalized on their line depth compared to Tampa’s offensive line depth, an advantage the Eagles will almost always win.

The Eagles were without Josh Sweat, a fierce edge rusher sidelined by an emergency surgery earlier in the week that the team termed “life threatening.” But the Bucs lost All Pro right tackle Tristan Wirfs and center Ryan Jensen fairly early, neutralizing any advantage they had by Sweat’s absence.

The Eagles sacked Brady at the end of three consecutive possessions, but eventually the loss of linebacker T.J. Edwards and the offense’s inability to control the ball, asked too much of the defense against the greatest quarterback the sport has ever seen, even without some of his best weapons and protection.

But there were just too many mistakes made by players whose fates are in question to ignore or to be certain that the Eagles are clearly headed in the right direction for 2022.

Jalen Reagor’s muffed punt in the third – one of two for the struggling receiver/returner – cut the field in half for Brady, who needed just five plays to march the Bucs 48 yards and into the end zone thanks to a busted coverage that somehow left a future Hall of Fame tight end wide open.

Gronkowski’s 2-yard touchdown catch felt like the nail in Sirianni’s playoff debut coffin, but just in case, the second of two bad Jalen Hurts’ two interceptions positioned the Bucs to run away.

Hurts so poorly threw an arcing pass off his back foot in the face of pressure that Shaq Barrett, playing with a sprained ACL and MCL, still managed to high-point the underthrown ball – with one hand – and tip it to himself for the deflating turnover.

On the next play, Brady found Pro Bowl receiver Mike Evans for a 36-yard touchdown connection that ballooned the Bucs’ lead to 31-0.

Hurts played well enough in his first season as starter to deserve another year leading the huddle, but it’s hard to ignore his limitations when considering if he can be the quarterback to lead the Eagles deep into the postseason and back to a championship.

His season-long struggles to see the whole field and make throw that aren’t predetermined manifested in front of a Bucs defense happy to disguise coverages more than all-out blitz.

You can also blame Sirianni for the offense’s pitfalls and for curious play calling, but he’s not going anywhere.

Hurts’ first interception should’ve been a touchdown, as the corner defending Smith tripped and left the former Alabama star alone in the near left corner of the end zone. Hurts had rolled to his left but didn’t decide quickly enough to target Smith.

When he did, he lacked the zip to connect with Smith before safety Mike Edwards could recover and steal the ball for a pick.

The 54-percent completion rate, two picks and some over- and under-throws shouldn’t obscure an otherwise promising season by Hurts, who exhibited growth and who’s well respected by his teammates.

But the bigger question is if Hurts can improve enough in 2022 to lead an offense that’s more balanced, not as run-reliant, and can function when the Eagles are down against playoff-caliber teams.

These discussions will take place at One Novacare Way in the coming weeks and months as the Eagles prepare to embark upon a critical offseason in which they’ll have three first-round picks, ample cap space and plenty of avenues to grow and improve.

No doubt the lopsided outcome of Sunday’s loss in Tampa will have an influence on those talks.