Birds Better Vs. Run, Still Dissected Via Air Vs. Bolts

A week after his unit held the Detroit Lions to 279 yards of total offense, Eagles defensive coordinator Jonathan Gannon is due for another long week of questioning and second-guessing.

Gannon on Sunday could only watch as Los Angeles Chargers second-year quarterback Justin Herbert unmercifully dissected his schemes in a 27-24 victory over the Eagles at the Linc.

Herbert, who completed 32-of-38 pass attempts for 356 yards and two touchdowns, became the fifth opposing quarterback to accumulate an 80-plus completion percentage against the Eagles this season and the second to eclipse the 300-yard passing mark in the past three weeks.

“So, I’m not going to say Jonathan [did] anything because that’s — my name is on that, right? So, whatever happens on that field my name is on, offensively, defensively. I’m not the offensive coordinator, I’m the head coach.

“So, again, it’s all of us together. So, it’s first myself, getting the right calls and putting the players in position, then Jonathan, then the players executing. So of course, again, when a guy comes away and he’s 84 percent you’re going to say, ‘We didn’t do our job, right?’ We just got to be better.” 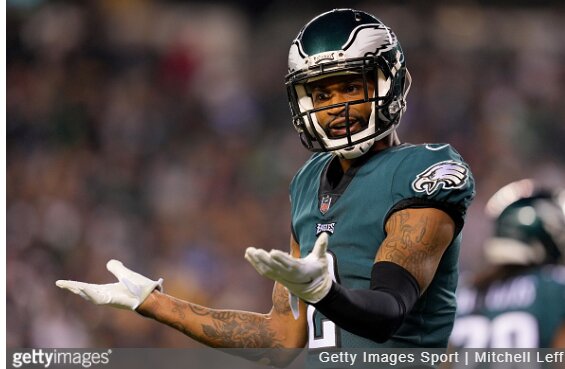 Darius Slay and the Eagles defense still have questions to answer

For the better part of seven weeks, a porous Eagles run defense was believed to be the primary culprit behind the team’s underwhelming start, allowing 931 yards and eight touchdowns on 227 carries entering the Lions game.

But Gannon’s schematic adjustments, which included dialing up blitzes at a higher frequency and calling for more single-high safety looks, held the Lions to 57 rushing yards on 18 attempts and placed quarterback Jared Goff under duress in the blowout.

While the Eagles’ 44-6 dismantling dropped the hapless Lions to 0-8, Gannon’s schematic wrinkles were better tested against a formidable Chargers offense.

The modifications worked against the run for the second straight week, limiting the Chargers to just 89 yards on 27 carries. Herbert provided the lone rushing touchdown, putting the Chargers up 24-17 early in the fourth quarter.

But the Chargers showed their versatility and other dimensions in absence of a rushing attack, as their passing game exploited an outclassed Eagles defense that failed to provide any resistance.

Even after Eagles quarterback Jalen Hurts answered the Herbert touchdown by leading a 10-play, 78-yard drive that culminated in a 28-yard touchdown strike to DeVonta Smith, the Chargers weren’t fazed.

With 6:07 left in regulation, Herbert responded with a demoralizing, clock-draining 15-play, 64-yard drive capped by a game-winning 29-yard field goal by Dustin Hopkins.

The glaring blemishes that hampered Gannon’s unit for much of the season surfaced in critical moments, as his reeling defense failed to make necessary stops down the stretch – including two fourth downs.

“They kept them in the third and one, fourth and one,” Sirianni said. “Obviously, you want to be able to get the stop. I thought they did a good job not jumping offsides. Chargers, I thought they might kick the field goal after they went the no-brainer, but they didn’t. Hats off to them, they executed.

A high-priced defensive line, which accounted for six sacks and 12 quarterback hits against Goff, failed to register a single sack against Herbert. The lone hit on the Chargers quarterback came from cornerback Steve Nelson.

Working against an injury-ravaged secondary, Herbert remained unflappable in the pocket while scanning the field and working through his progressions.

Aside from the six-sack outing in Detroit, the defense has come up empty in three of the past four weeks.

Javon Hargrave, who leads the Eagles with 6.0 sacks but hasn’t recorded one since Week 5, noted some Chargers techniques that hindered the effectiveness of the defensive line.

“They chipped more than usual,” Hargrave said. “The ball came out quicker than we expected. Hurry-up stuff and little things.”

While it appears Gannon remedied the shortcomings of his run defense, he’s still falling short of finding ways to rattle good quarterbacks. If he doesn’t figure out how to generate more pressure, more long weeks like these will persist.