Maybe the Eagles have turned a corner with their running game and improved run defense, but they haven’t yet on finding ways to beat teams with good quarterbacks and winning home games.

The Eagles were much more competent against the Chargers on Sunday at the Linc than they had looked against Dallas, Kansas City, and Tampa Bay earlier this year as the coaches have refocused on a ground game for the offense and adjustments on defense to stop getting gashed on the ground but they lacked an answer for Chargers quarterback Justin Herbert when they needed a stop.

With the game tied and about 6 minutes to play, Herbert marched the Chargers from the Los Angeles 25-yard-line to the Philadelphia 11-yard line, where Dustin Hopkins nailed a 29-yard field goal with just two seconds left on the clock as the Bolts won, 27-24, keeping the Eagles winless at the Linc in four games this season.

Herbert’s bullet to Keenan Allen on 3rd-and-6 just inside the Philadelphia 40 set up an easy fourth-down run by Austin Ekeler, and his play-action pass to Donald Parham Jr. set up a 4th-and-1 sneak that moved the chains as time wound down and with the Eagles exhausting their final time out.

Herbert, who passed for 356 yards, became the fifth quarterback this season to complete 80 percent of his passes against the Eagles, who fell to 3-6. The Chargers (5-3) snapped their two-game losing streak.

Were the Eagles more competitive? Absolutely.

Did it make a difference in the win column? It didn’t.

The Eagles will have to hope the strides they’ve made over the past two weeks translate better against the Broncos and Saints, their next two opponents, respectively. They travel to Denver next Sunday before coming home for New Orleans. Quarterback play for the Broncos and Saints has been spotty at best.. 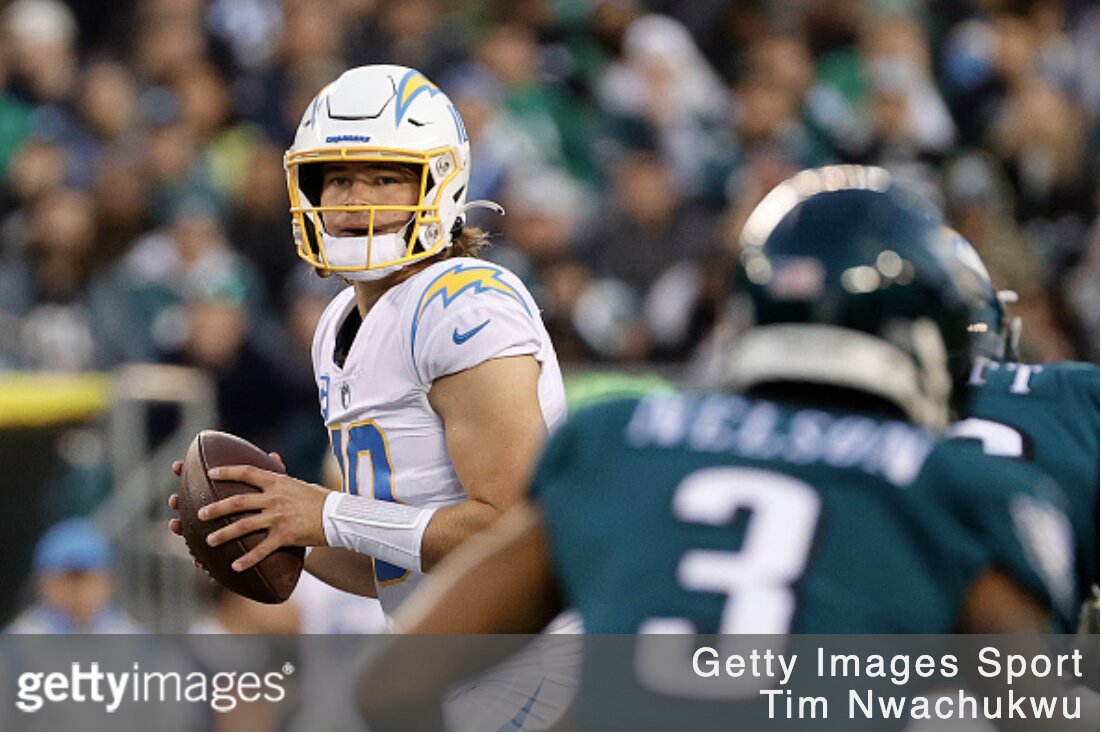 1. Did Nick Sirianni give away the first 14 minutes of the game? It’s a fair question given that he reverted back to the heavy shotgun formations that were prevalent in the team’s offensive struggles for the first seven weeks. The Eagles went under center on the first play of the game, gained three yards on a Boston Scott run, then went shotgun for the next five plays and ended up punting. The Eagles were backed up on their next possession – practically into their own end zone – but opted for a first-down deep pass and then punted after a failed third down. Not until the start of their third possession, with 50 seconds to go in the first quarter, did Sirianni start to lean heavily on the run game against the NFL’s worst run defense. Why he did he wait?

2. It’s amazing to think Jordan Howard averaged less than 2 yards per carry with the Dolphins last year, was cut, and then spent the rest of the season on the Eagles’ practice squad. The guy thought his career was over and the Eagles were the only team to offer him a contract in the offseason. Then he didn’t even make the Eagles despite an impressive training camp. Against the Chargers, he had 56 yards and his third touchdown in two weeks by halftime and finished with 71 yards on 17 carries. Granted, the offensive line has created nice lanes for Howard, but that doesn’t change the fact that the guy practically falls forward to get three yards on his worst carries.

3. Hurts wasn’t a great thrower of the football on third down but made some great plays with his legs to move the chains, especially in the second half, and also made some terrific passes after the break, especially to DeVonta Smith. His 28-yard touchdown to Smith in the fourth came by sticking in the pocket and trusting his protection. He made consecutive perfect throws in the third to Smith for 42 total yards on a touchdown drive. His second half was way better than his first, and it showed that he can be good when he’s not asked to throw the ball 40-plus times. But … Hurts spoiled a chance to hit Smith on fourth down for a touchdown before halftime and threw an errant pass off his back foot. Most of his best third-down conversions came from scrambles, which is an off-script part of his game that the coaches try to keep at a certain percentage, but those runs certainly worked against a Chargers defense that didn’t have an answer for him. Bottom line: he played winning football.

4. The downhill run, albeit late,  allowed Sirianni to show some sequencing as a play caller, using specific play calls to set up others. A 3-yard first-down run on the Eagles second possession enabled Sirianni to call a play-action from the same under-center design, enabling Hurts to roll right with no pressure and find Smith along the right side for 27 yards. On 3rd-and-goal of that drive, the offense then came out in shotgun, creating run-pass guesswork for the defense, and Howard went straight up the middle for a touchdown. On the next possession, which ended in a Jake Elliott field goal, the Eagles then worked zone reads and read option, setting up Hurts runs to the outside while the defense was keyed to stop the inside run. There was also a shotgun draw for Howard followed by an empty backfield look that caught the Chargers’ defense off guard and led to Hurts finding Quez Watkins for 16 yards. This was patterned play calling that was absent for the first six weeks of the season as the predictable offense didn’t generate flow or rhythm.

5. Run defense was as its best all season. Every time Herbert handed off, it felt like a win for the defense. The move to T.J. Edwards alongside Davion Taylor in most nickel packages, which started last week, made another impact. The Chargers averaged just 3.3 yards per carry and were forced to throw a fullback on the field more in the second half to generate any semblance of a running game. Would have been nice if the Eagles could’ve been a little more stout, though, in the fourth quarter.

6. Jonathan Gannon again showed more aggression on defense. He called a few blitzes, one that actually hurt the team when Steven Nelson nailed Herbert too late for a personal foul on top of a 12-yard screen gain. But he also continued to bring a safety into the box on specific downs, mixing his one- and two-shell coverages, using Marcus Epps along with Anthony Harris and Rodney McLeod. Epps has played well lately, even better than Harris, and deserved to see playing time even with Harris back in action. However …

7. Pass defense wasn’t nearly good enough, even with Gannon mixing coverages and showing more aggression. He played man on 3rd-and-4 on the Chargers’ opening drive of the second half, and Herbert easily connected on a slant with Allen for 16 yards. Herbert threw a jump ball to Donald Parham Jr. for 19 more, which set up a game-tying field goal, and later in the third found Mike Willams with a beautifully placed deep ball for 49 yards. You can see why Herbert looks like the next elite quarterback. He’s got a great arm and he’s smart with the football, along with plus athleticism for his size. It’s not easy to come to the Linc for the first time and carve up the Eagles, even this year’s Eagles. Herbert showed great poise.

8. The Eagles didn’t generate enough front-four pressure, which is surprising given the Chargers’ struggles on the right side of the offensive line. When Gannon called his two-deep zones and didn’t dial up pressure, Herbert didn’t see much interference from guys like Fletcher Cox, Josh Sweat or Derek Barnett. He wasn’t sacked and was hit just once – by Nelson, who was late. Nothing from the D-line. That’s kind of puzzling, especially with the Eagles at home and the Linc crowd rocking.

9. Tyree Jackson made his first appearance of the season, which was nice to see. The towering tight end didn’t show catch a pass, but he triple-teamed with Dallas Goedert and Jack Stoll on an abundance of 13 personnel groupings (one running, three tight ends, one wide receiver) that helped power the run game. John Hightower also saw his first action of the year. He was elevated from the practice squad to take J.J. Arcega-Whiteside spot. Hightower for some reason tried to return a kickoff from two yards deep in the end zone and only made it to the 15.

10.  Some argued that the Eagles would’ve won a game or two more over the first six weeks if the Eagles had ran the ball more or made adjustments against the run during that time. This loss shows that they probably wouldn’t have. They’re more competitive, but they still aren’t good enough on either side of the ball to get the benefit of the doubt that their record would be different had they made changes earlier.