To move past the the painful memories of a Tuesday nightmare more than a decade ago, to avoid the embarrassment of again losing to another unsung quarterback, the Eagles turned to some of their own unexpected contributors for necessary late-game playmaking.

Jalen Reagor, an underperforming first-round pick, took a swing pass and kicked into high gear for 34 yards in the fourth quarter, setting up an acrobatic, 19-yard touchdown catch by rarely used receiver Greg Ward as the Eagles used that touchdown connection to pull away from an undermanned but undeterred Washington Football Team ravaged by Covid-19 and other injuries trying to pull off a major upset at the Linc.

In a game postponed two days because of the virus outbreak in Washington, the Eagles avoided another mid-week letdown like the one they suffered in 2010 at the hands of backup Vikings quarterback Joe Webb, this time making enough plays to win, 27-17, against their NFC East, finally climbing to .500 to stay in the playoff hunt.

The biggest came from Ward, who twisted and turned to reel in a back-shoulder throw in the near right corner of the end zone after Jalen Hurts had bought time by rolling right and perfectly placing the ball where only Ward could make the catch. The lead extended to 10 with fewer than eight minutes to go, snatching the momentum from Washington, which had marched 69 yards on its previous possession and scored a touchdown to narrow its deficit to 20-17.

Hurts returned from a one-game absence because of an ankle injury to pass for a touchdown and run for two others, Dallas Goedert put forth the best game of his career, and the Eagles ran for more than 220 yards to overcome two turnovers, several drops and some of their own injuries and Covid-related absences.

The Eagles survived the first of four straight NFC East games to close our their season. They have a short turnaround before their Sunday game against the Giants and will battle Washington again in two Sundays at FedEx Field in Landover, Md. 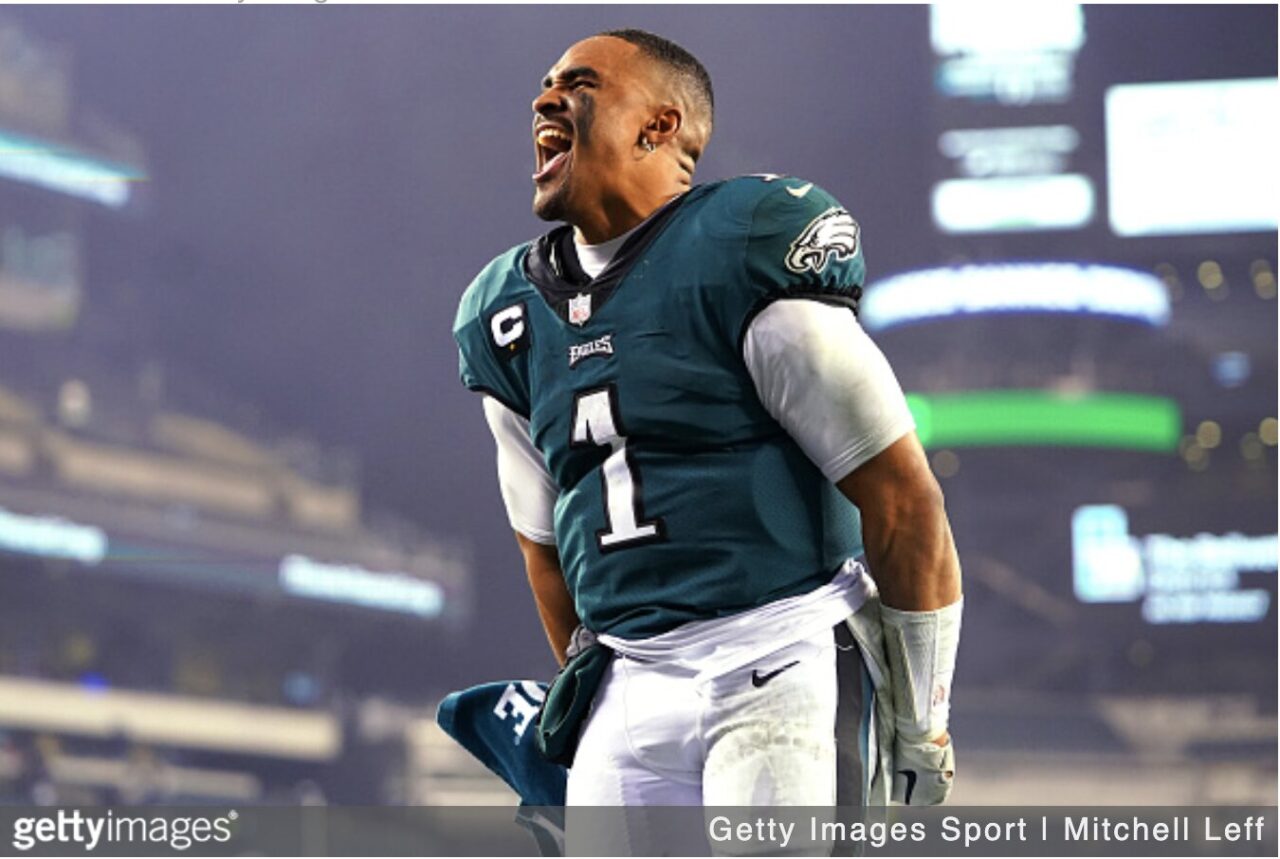 1. The game wasn’t pretty, but there are two bottom lines: the Eagles won, and Jalen Hurts looked healthy and productive. The win helped keep the Eagles alive in the playoff hunt after a weekend that wasn’t very encouraging for them – with San Francisco, New Orleans and Minnesota each getting victories.  There was some obvious adversity with the long layoff between games and missing two offensive linemen, but Washington was in much worse condition, so it’s hard to make too much of individuals or position groups. The Eagles should have dominated in the second half after Washington lost Landon Collins, William Jackson and some others, but instead let Washington hang around. That’s not optimal, but the win is most important.

2. The 16-day layoff, 23 for Hurts, reared its head early, as the Eagles turned the ball over twice on their first two possessions. You had to expect some rustiness, which manifested in Goedert dropping a wide open third-down pass on the opening drive, along with other drops and some early penatlies. The fact that the ball somehow bounced off Goedert’s right heel on his first drop and ricocheted into the hands of Landon Collins? That’s just Tuesday Night Football craziness. Hurts looked slow in the pocket at the start, as he was sacked for the second time on the Eagles’ second possession, just two plays after an awesome sideline connection from Hurts to Devonta Smith. The sack-strip by Montez Sweat on Hurts came after Hurts was indecisive in the pocket. That the ball was again fumbled on Washington’s return, and again recovered by Washington, was also Tuesday Night Football ridiculousness.

3. Really, those Eagles mishaps were self-inflicted wounds, more about the Eagles being sloppy than Washington overwhelming them. The game reminded me of the Eagles’ 23-17 overtime win over the Giants on Dec. 9, 2019, after the Giants led 17-3 at the half in Eli Manning’s final start. The Eagles eventually settled down and overcame the two-touchdown deficit against an inferior team by just simply playing better and shaking off the early miscues.  All the Eagles needed to do against Washington was protect the football to move the chains offensively, which they did after a rocky first quarter, and play good-enough defense, which they didd.

4.  Hurts improved as the game progressed and looked spry enough on the ankle to make plays outside the pocket, although head coach Nick Sirianni pressed pause on the designed run and zone reads that we had seen before the ankle injury. There were a few open receivers he didn’t see – the most egregious being throwing to a double-covered  Smith in the right corner of the end zone when it appeared Kenneth Gainwell was open on the rub route – but Hurts also made some sharp passes. His 26 pass attempts showed trust from the coaches to pass more than they typically have early in the game. Hurts had just three fewer completions at halftime (11) than he did in total against the Giants.

5. Miles Sanders still scares you with near-fumbles, like when he lost the ball in the third but was ruled down by contact first, but you can’t deny he has served the role of workhorse back. He followed up his 120-yard, 24-carry effort against the Jets with a career-best 131 rushing yards on 18 carries, including a long of 38. He showed the signs of a complete back again – running hard between the tackles, outside the tackles, showing patience.

6. Sanders and Jordan Howard finally played a full game and proved to be an outstanding 1-2 punch, with Howard adding an additional 69 on the ground in his first come back from a knee sprain. He didn’t look as fast or dynamic as he was before the injury, but the downhill element was there. Despite some early penalties, the Eagles’ offensive line set the tone, even with Sua Opeta and Nate Herbig starting at the guard spots. The Eagles sometimes look like they can’t be stopped when they get into their ground-game mode. They racked up 238 yards on 41 carries, averaging 5.8 per run even with Hurts only adding 38 yards on the ground.

7. Sure seems like Dallas Goedert could’ve finished with at least 150, and maybe 200, yards for the game, as two bad drops on screens with plenty of green in front him marred an otherwise outstanding game. Goedert went over 100 yards for the second straight game – first time in his career he’s pieced together consecutive 100-yard games – and set a new career high with 135 yards on seven catches. He went up between two defenders to haul in a 45-yarder in the first quarter, showing his unique abilities. Smith is the team’s best wide receiver, but the pass offense really should run through Goedert first, Smith next.

8. Defensive coordinator Jonathan Gannon really didn’t come after Garrett Gilbert, which wasn’t surprising given his reputation, but should have been. There was very little extra-man pressure against a quarterback making his first start for a new team that just signed him five days ago. I mean, c’mon. This is basically what we’ve come to expect from Gannon. His plan worked, in that Washington only scored 17 points and Gilbert didn’t throw a touchdown, but for the future, you’d like to see Gannon be more aggressive in these situations. The Eagles had a chance to make life really uncomfortable at home for Gilbert, who shouldn’t have finished with the same number of completions as Hurts.

9. Also surprising: Sirianni keeping three points on the board after a Washington penalty on Jake Elliott’s 37-yard field goal. The Eagles could’ve had 4th-and-1 deeper in Washington territory. Sirianni bypassed a chance to stick his foot on Washington’s throat. It didn’t backfire on him, but just like Gannon with the blitzing, you’d like to see the head coach be more aggressive in those situations, every time.

10. One of the most unnecessary penalties you’ll ever see is Jordan Mailata’s 4th-and-1 hold on a toss to Howard that would’ve easily picked up first down whether Mailata held or not. Just no reason or logic for Mailata to wrap his arms around corner Bobby McCain instead of just blocking him to the chest area. Penalties were problematic for the Eagles, but again, those are bound to happen when a team doesn’t play for 16 days.