“The Plays Will Be There”

The Eagles are headed to Vegas in search of a crucial road victory Sunday against an inconsistent, but-4-2, Raiders team.

On the latest Inside The Birds podcast, Geoff Mosher and Adam Caplan previewed the matchup and gave their predictions. 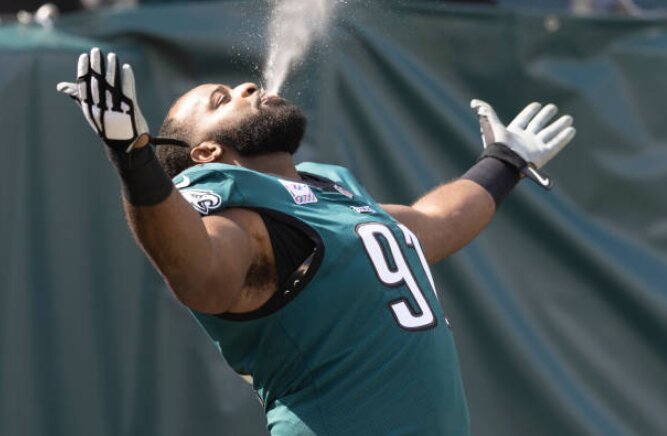 Adam Caplan: “[The Eagles] should have no problem protecting the interior. It’s the speed rushers [for the Raiders]. Now, Lane Johnson is playing, that’ll certainly help and then obviously Mailata, back following the MCL sprain which is huge and he’s doing better. The Eagles’ offensive line was sort of uneven, [more] good than bad this week but they are playing speed rushers this week and they definitely will have their hands full with that speed so they’ve got to be ready for this one. If they protect Hurts the plays will be there.”

Caplan: “[The Raiders] have really improved on defense, the numbers show it. But we know they give up run plays. You mentioned [Miles] Sanders, this is a good matchup for him and [Kenny] Gainwell. The Raider linebackers are way better this year, where they were horrendous last year. Part of that was Cory Littleton barely played, he was on the COVID list and did not have a good year when he played. Nick Kwiatkoski was a free agent signee who the Eagles looked at but they never made an offer, they just weren’t going to pay him so it wasn’t under serious consideration. He doesn’t even start anymore. They brought in K.J. Wright, formerly of Seattle and he obviously knows Gus Bradley. Denzel Perryman, who they traded for from Carolina, he’s played really well, I’m told, but they are light at linebacker in terms of weight.

Caplan: “[Raiders center] Andre James is not very good at center. I’ll tell you what, where this [Eagles] D-Line is going to eat is in the interior, the interior of the Eagles’ defensive line versus the Raiders interior, they should dominate. This is where that three-point spread will make sense to me. Hargrave and Cox should go off in this game. This is going to be fun to watch, folks.”

Mosher: “It really should be, and it’s amazing to think that two of the starters on Alabama’s offensive line last year will be playing in this game. [Raiders right guard Alex] Leatherwood and [Eagles left guard] Landon Dickerson, and they’re both playing guard. Neither of them I think played guard last year because Dickerson was the center and Leatherwood was a tackle.”

Mosher: “I wonder if [Darius] Slay will travel on [Darren] Waller like he did with [Travis] Kelce at times. It’s tough to leave [Henry] Ruggs on [Steven] Nelson because Nelson does not deal well with speed receivers, if you don’t want to take that chance. Zay Jones can beat you, too, he had the opening-night touchdown to win the game against the Ravens. The call was the Ravens zero-blitzed and then [Derek] Carr just threw the ball down the field for Zay Jones and touchdown.”

Caplan: “This is a tough one, this is fascinating. This is a winnable game, only if the Eagles play extremely well.”