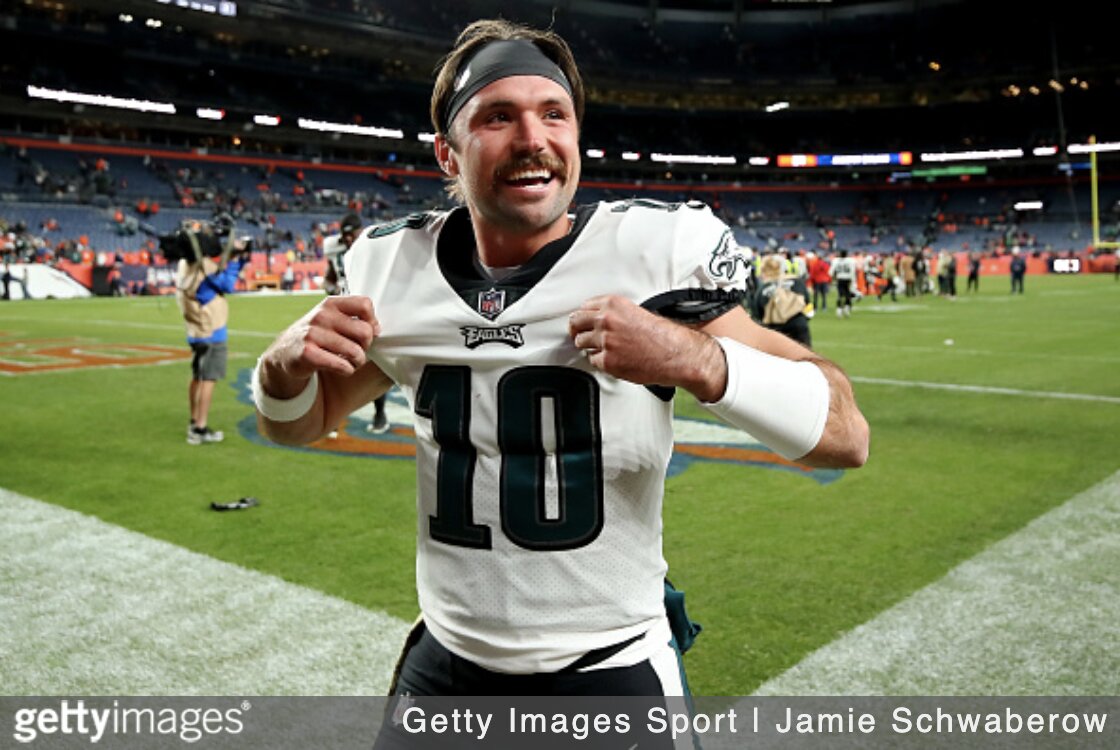 Gardner Minshew won his 8th career game, leading the Eagles over the Jets

Filling in for the injured Jalen Hurts, Gardner Minshew became the latest Eagles backup quarterback to come off the bench and provide a spark plug to a struggling offense.

Minshew, in his first appearance of the season and first since the Eagles traded for him during training camp, completed all 11 passes before his first incompletion late in the second quarter. He found Dallas Goedert twice in the first half for touchdown passes and then let Eagles’ top-rated rushing game take care of the rest, as the Eagles bounced back from last Sunday’s loss to the Giants at MetLife Stadium to wax the Jets at the same venue, winning 33-18.

Minshew, the free spirit who arrived at the stadium sporting his trademark 70s mustache and a wardrobe resembling a character from the movie Top Gun, finished with 242 yards, completing 20 of 25 passes – 80 percent – and compiling a 133.7 passer rating. The Eagles also ran the ball 45 times for 185 yards, averaging 4.5 yards per carry in the lopsided win, as they climbed to 6-7 headed into the bye week.

The Eagles are still in the mix for a postseason berth and more information about the severity of Hurts’ ankle injury will be revealed in the coming days. The Jets (3-9) had led 18-14 in the second quarter after scoring on their first three possessions but didn’t score on their final five possessions.

1. Gardner Minshew played well and guided the offense perfectly, but that’s what backup quarterbacks are supposed to do – especially against terrible teams – and it’s why the Eagles traded for him and felt comfortable trading Joe Flacco away. But that’s where the conversion ends. Jalen Hurts should go back to being the starting quarterback when healthy. There’s no evidence to suggest Hurts wouldn’t have beaten the Jets and the Eagles are still trying to evaluate him as a potential long-term starter.

2. We finally caught a glimpse of Miles Sanders as a workhorse running back. He logged his 21st carry in the third quarter, a new career high, and finished with 120 yards on 24 carries. The bigger point is that he showed he can handle the heavy diet of carries and he didn’t turn the ball over. He also didn’t lose his impact as the game went on, as he ripped off his longest run in the fourth, a 34-yard run. He obviously exited with another injury, but in fairness, it appeared C.J. Mosely landed directly on his ankle or foot with about 10 minutes to go.

3. In general, the Eagles’ run game looked a lot different without Hurts at quarterback and the threat of his run. The offensive design was much more conventional, under center and downhill, with Sanders and rookie Kenneth Gainwell taking most of the reps and working through lanes created by the offensive line. There wasn’t any zone read or designed quarterback runs that helped scheme openings for the run game based on motion, misdirection or the threat of the quarterback pulling the ball.

4. The connection between Minshew and tight end Dallas Goedert clearly highlighted the passing offense. Goedert’s six targets were most among all targets and his touchdowns in the first half came off nice throws. Minshew ducked a blitzer in the first quarter after a play-action fake and perfectly threaded two Jets defenders to find Goedert, who took a hit but barely moved as he turned and finished off the touchdown catch. Minshew actually under a 25-yard touchdown pass to Goedert in the second, but the tight end was so open, it didn’t matter that the throw came in at Goedert’s inside shoulder.

5. Minshew’s play-action dart to Quez Watkins for 28 yards in the third quarter might have been the quarterback’s overall play of the game and nicest throw. Otherwise, Eagles receivers enjoyed a day off. Watkins caught two more passes, Devonta Smith finished with two receptions and Jalen Reagor, who had an adventurous day on special teams, caught one pass. Reagor’s sprawling catch was his second in two weeks, as he made a nifty catch against the Giants in left corner just short of the end zone, but the drops at the end of the game obviously overshadowed anything positive he did.

6. Jonathan Gannon’s passive approach probably will earn him some criticism throughout the week, especially because Zach Wilson – a sub-60 percent passer – completed seven of his first eight passes as the Jets put together two long drives on the first three possessions and scored touchdowns on their first three possessions. It didn’t appear that Gannon made major adjustments, but the Eagles were helped by scoring 19 unanswered points. The Jets weren’t great on third down. Wilson was sacked twice, both were coverage sacks, and was intercepted once. Again, it’s the Jets. Hard to make any long-term conclusions.

7. I’m still not sure why the Eagles allowed the Jets to sign safety Elijah Riley off the practice squad given the Eagles’ lack of young, developmental safeties, but Marcus Epps continues to play more confidence and adds some playmaking talent. Epps stepped in front of an overthrown Wilson pass down the seam for the Eagles’ lone pick. Being in the right place at the right time can help you get those picks.

8. Jake Elliott’s progression from last year is an important storyline, especially since the kicker had inked an extension going into last year and then didn’t perform well. Some of the snap process involving the punter and holder wasn’t perfect last season, and possibly contributed to Elliott’s shaky year, but he’s bounced back and will be important this month as the Eagles chase a postseason berth.

9. Screen passes were a major point of emphasis for both teams. The Eagles even found some success throwing screens to Goedert, which is a weapon they should try to showcase more often. Goedert isn’t fast but he’s hard to bring down and moves well in space. Goedert has a chance to be a Travis Kelce-like weapon for this team if the quarterbacks can continue to get him the ball. The 105 yards were the most of his career. He’s only had five games where he’s caught more than six passes.

10. Pray for Jason Kelce. The veteran center limped off the field late in the game after apparently injuring his knee. Nate Herbig, who filled in, got his requisite high snap over with on his first snap in Kelce’s place. Kelce didn’t need to be carted off, but he appeared gimpy on the sideline. He was able to shake off a knee from last Sunday’s win against the Giants to play. He’s arguably the most indispensable player on the team.