After a good-looking couple of wins from the Eagles in Weeks 10 and 11, mistakes and turnovers prevented the team from getting its third straight win Sunday, this time against the Giants.

On the latest Inside The Birds podcast, Geoff Mosher and Adam Caplan discussed the breakdowns against the Giants that led to a 13-7 loss and dropped the Eagles to 0-2 in NFC East play. 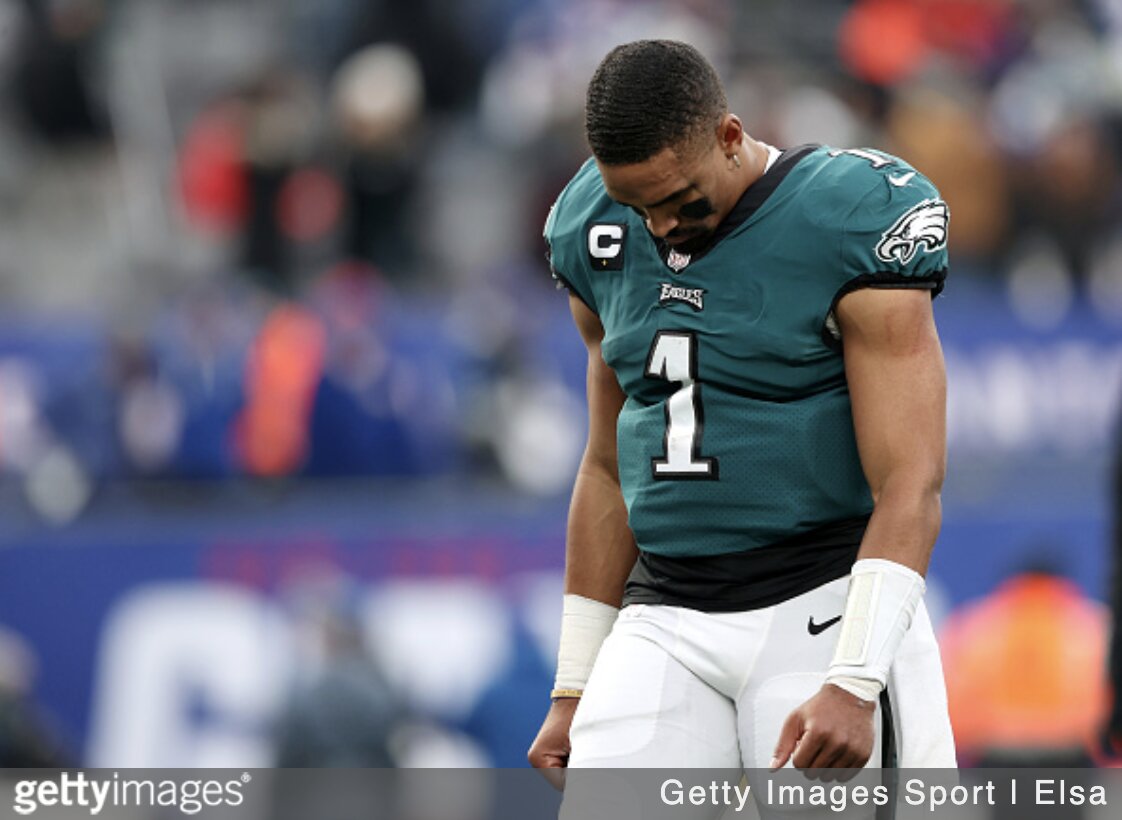 Jalen Hurts suffered the first three-interception game of his career vs. the Giants

Adam Caplan: “Self-inflicted wounds, that was the story of the game for this team. The Giants had nothing to do with it. It was all self-inflicted wounds by the Eagles, they have no one to blame but themselves for this loss. Seriously, they should have destroyed this team. When you run for over 200 yards and you run the ball 33 times and you lose, how’s that even possible?”

Geoff Mosher: “We had mentioned that [Jalen Hurts] was getting better at staying in the pocket and making throws and I still think he’s getting better at staying in the pocket. One of the issues that they’re finding now – and you saw this in the game – is that teams are actually trying, the way they’re scheming their pass rush, they’re OK with him staying in the pocket because the one area that we still have yet to see progress … is the timing and the anticipation. When he’s in the pocket and you take away that ability for him to want to get out of it and you try to get him to make a throw, he’s late or doesn’t see a lot of receivers, and I thought that hurt him against the Giants.”

Mosher: “Jalen Reagor all of a sudden out of nowhere had seven targets in the game, right? Do you know that that’s more targets than he had in the prior three weeks combined? He had three games with six total targets and then all of a sudden he’s getting seven in one game. Which to me represents two things: One, a really blown opportunity on Jalen Reagor’s part; and No. 2) a lack of just consistency. There’s just no rhythm, there’s no flow with these two guys. They both have to own it, more so Jalen Reagor because he had the opportunities to make plays.”

Mosher: “There was a point where the Giants — and this was big if you consider how the game went now — got down to the Eagles 26 yard line and then Barnett had a tackle for a loss for about four or five yards and then he got held on the next play for minus yards. That backed the Giants up 15 yards and I think [Graham] Gano missed the field goal after that. So that actually wound up having a pretty big impact and giving the Eagles a chance to still be in the game and not let it get a little bit more out of hand there. I think it was after the Denver game where he had another penalty and I said they may have to get this guy off the field for for a quarter or something as a disciplinary thing.”

Caplan: “You can’t bench him because they just don’t have anyone else with [Brandon] Graham out for the season. But he’s a good player. Not great, not very good. But he’s better-than-average to good. Look, he’s got a contract year, he knows that he’s got to be more consistent but lately as you said he’s playing better.”