Birds Shake Off Ugly Start, Dominate Giants In Second Half

One impressive streak came to an end Sunday at the Linc, as the Eagles failed to rush for at least 175 yards for the eighth straight game.

But the Eagles, despite some major blunders against the Giants, will be satisfied with their other, more impressive streak. Their 34-10 win was the team’s third straight win – their first three-game win streak of the year – and boosted the Eagles above .500 for the first time since starting 1-0, as they climbed to 7-6.

For a team that started 2-5, getting above .500 will be the biggest takeaway over failing to become the first team since the 1972 Miami Dolphins to rush for over 175 yards in eight straight games.

The Eagles also showed that they’re still flawed, as they slogged through an afternoon of dropped passes, bad penalties and overall uninspired offensive play against a bad Giants team that lost its fourth straight and fell to 4-11.

The game was tied at 3-3 until the Eagles hit some big plays in the second half — a 39-yard catch by Quez Watkins, a 39-yard punt return by Jalen Reagor and a tiptoe touchdown catch from DeVonta Smith, followed by a well-drawn touchdown pass to right tackle Lane Johnson.

Next up is a rematch against Washington, which the Eagles beat 27-17 last Tuesday as the game was moved two days back because of Washington’s Covid-19 outbreak that kept several starters and key players sidelined. Washington should be in much better shape for the rematch at their house. 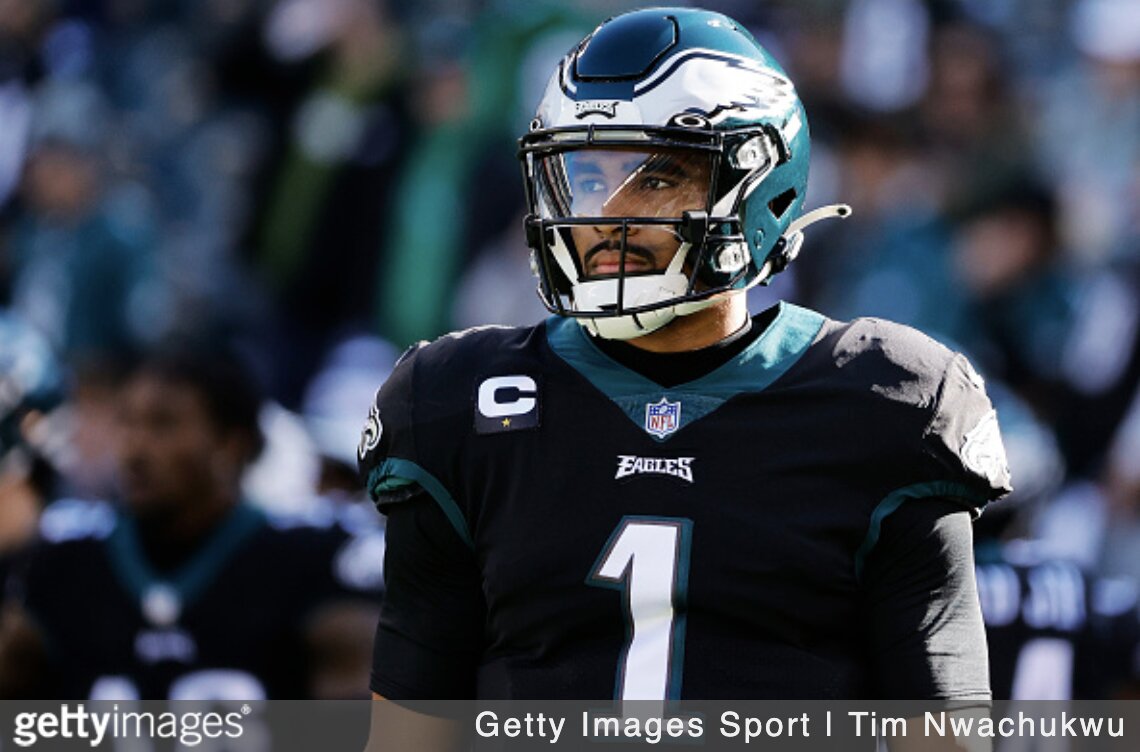 1. Pick any adjective you want to describe the game. It was ugly, regardless of the final score. And it’s fair to wonder if the Eagles would’ve won that exact game against almost any other NFL team. But their season is now a two-game season, starting Sunday at FedEx Field in Washington. They’ll have to play way better against Washington than they did against the Giants to win.

2. Drops surely conspired against Jalen Hurts and the offense in the first half. Dallas Goedert had some. Miles Sanders had a drop. Jordan Howard had a drop. But Hurts was far from his sharpest and once again left plays on the field. The Giants have come after him twice in two games and have figured out how to prevent him from breaking off long runs while also speeding up his internal pass clock. They blitzed from the second level around the edges to add an extra defender up front to keep Hurts from breaking contain or just to put an extra box defender against the run. They’re a pretty good defensive team, which goes unnoticed because the rest of the team isn’t good, and they’ve definitely figured out how to make Hurts indecisive. They obviously were on the field too much to keep that pace for entire game.

3. Although the Eagles didn’t rush for 175 yards, they still churned out 130 on 30 carries, an average of 4.3 yards per run. They still ran effectively; they just didn’t overwhelm the Giants with their run game. But it’s worth noting that they again ran effectively without the designed QB run elements that Hurts brings to the run game. Hurts ran for just seven yards on two carries, by far the fewest of both in his Eagles career. His previous low was 30 rushing yards earlier this year against the Panthers.

4. On “ITB Pregame Live,” Jason Avant said Dallas Goedert can’t be in elite territory with George Kittle, Travis Kelce and Darren Waller until he shows more consistency catching the ball and ab ability to beat man coverage. Goedert, who had two bad drops against Washington in an otherwise sterling game, had some bad drops again and also couldn’t separate early in the game from Seven Parker after Hurts was flushed from the pocket toward the right sideline. Parker almost picked off Hurts’ throw but replay showed the ball hit the ground. In two games against the Giants, who have played a decent amount of man against them, Goedert has just three catches for 28 yards.

5. The Eagles appeared prepared for the slot pressures that worked for the Giants in the first game and were thrown at Hurts again. Many of their play designs involved routes in the flat and across the middle, designed to give Hurts an easy option against the extra pressure. But the Giants still got their desired result by getting their hands on balls near the line of scrimmage and by showing different coverages on the back end, while giving up the short to intermediate areas. Even when Hurts beat the blitz, the Giants were able to swarm and tackle before the sticks.

6. Miles Sanders’ inability to stay healthy should factor into the team’s offseason thinking about the run game moving forward. Sanders still has one year left on his contract, which is when the team typically looks to extend a contact, but there’s considerable risk in committing to Sanders, who missed three games with an ankle injury, came back and aggravated the ankle, was listed on the injury report this past week with a mysterious quad problem, and then left in the first half against the Giants with a hand injury. Kenneth Gainwell could already be a candidate to be the lead back going forward but the Eagles might want to pick a Day 3 running back just to continue fortifying the position.

7. Jonathan Gannon came after Jake Fromm a little bit more than he did against Garrett Gilbert, but honestly, Jake Fromm was so bad, it’s hard to determine if more or less pressure would’ve made a difference. Fromm looked unprepared in his first pro start and the Giants absolutely needed to pull him in the second half. They could barely run a basic NFL offense with Fromm pulling the trigger.  Glennon’s arm strength alone made him a better option. Unfortunately for the Giants, Glennon isn’t an ideal option, either. The Eagles were fortunate they were playing against these two quarterbacks.

8. Seems like Genard Avery has a breakout game once a seasonn that shows you his unique athleticism. Avery blitzed on a defensive line stunt that caused Fromm to heave the ball downfield and have it picked by Rodney McLeod near midfield and returned deep into Giants territory. Avery later chased down Saquon Barkley on a third-down run.

9. Great to see the Lane Johnson touchdown. Everyone loves an offensive lineman touchdown catch, but it’s especially cool to see it for Johnson, who’s been through his personal tribulations this year and is universally respected by his teammates and coaches. Missing three games this season for personal issues probably cost Johnson a Pro Bowl berth, so maybe the touchdown compensates. Also a nice play design by Nick Sirianni and his staff that resulted in Johnson being wide open.