Despite a valiant second-half surge from the Arizona Cardinals, the Eagles prevailed, 20-17, at State Farm Stadium in Glendale, Ariz., preserving their perfect record and winning their first game in franchise history in that arena.

Jumping out to an early lead, the Eagles appeared to be firing on all cylinders, but injuries to the offensive line coupled with inevitable regression in key areas served as the Cardinals’ catalyst in pushing the NFL’s lone unbeaten team to the brink.

With the game tight deep in the fourth, it ultimately came down to a pair of young place kickers – Cameron Dicker and Matt Ammendola.

Dicker gave the Eagles a three-point lead with 1:48 left to play, converting a 23-yard attempt. Ammendola, a Lansdale, Pa., native, had a chance to even score but missed wide right from 43 yards out with 17 seconds left in regulation. 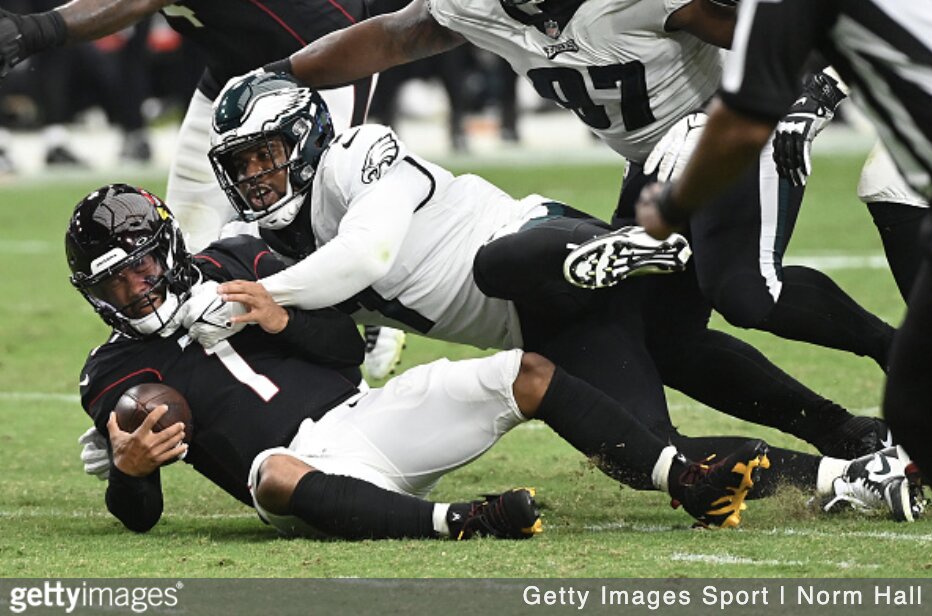 1.) The Eagles fell behind early in monsoon-like conditions at home last week but hit the ground running in all three phases against the Cards. The fast-flowing defense surrendered a first down on Arizona’s opening possession, but the momentum was short-lived, only yielding 11 yards on five plays. The offense was surgical from the opening possession, marching on an 11-play, 64-yard scoring drive that culminated in a 1-yard Jalen Hurts touchdown plunge. Hurts was efficient on the drive, completing 5-of-7 pass attempts for 56 yards. This is a notable development, as slow starts had a tendency of snowballing in past years.

2.) Hurts’ improved mechanics were on display on a first-quarter pass in which he rolled out to his left, reset his feet, flipped his hips and delivered a strike to DeVonta Smith to jumpstart a 16-play, 97-yard drive that drained 7 minutes and 20 seconds of clock. Hurts’ offseason work with quarterback guru Tom House has been evident on several of his throws this season.

3.) The depth of the Eagles’ offensive line was tested early when left guard Landon Dickerson exited with a leg injury. Already down left tackle Jordan Mailata – Jack Driscoll started in his absence — Sua Opeta filled in for Dickerson. Later, it was center Jason Kelce who was forced to exit, and the next man up was rookie Cam Jurgens. By halftime, the Eagles’ offensive line consisted of Driscoll, Opeta, Jurgens, Isaac Seumalo, and Lane Johnson. Despite the Eagles’ best efforts, the mounting injuries proved to be too much, resulting in a sack and four quarterback hits in the first half.

4.) Arizona’s six-play, 57-yard scoring drive was a byproduct of shoddy tackling from what had typically been a fundamentally sound defensive unit in recent weeks. I also found the coverages to be far too soft in light of the circumstances. I’ll take a deeper dive into the defense this week, but on the surface, I was underwhelmed with defensive coordinator Jonathan Gannon’s approach and the execution in this one.

5.) I’ve written this often, but pass rush and coverage typically go hand-in-hand, and aside from a timely Haason Reddick third-down sack late in the third quarter, the Eagles’ pass rush was essentially a non-entity. Sacks have come in bunches for the Eagles the past couple of weeks – and every week won’t be a sack brigade — but the lack of consistent pressure was glaring and allowed Kyler Murray to play pitch-and-catch with wide receivers Marquise Brown and Rondale Moore.

6.) Special teams production was a mixed bag. Kudos to the rookie Dicker, signed to the practice squad earlier this week and subsequently promoted to the 53-man roster Saturday to replace injured Jake Elliott. Dicker went 2-for-2 on extra point attempts and converted his initial field goal attempt of 42 yards as well as a 23-yard game-winner. Now for the bad – rookie free agent punt returner Britain Covey accrued 22 yards on three returns but fumbled  (and recovered)  an opportunity late in the third quarter. Punter Arryn Siposs demonstrated marginal improvement this week but still leaves much to be desired. The Cardinals also caught the Eagles sleeping and executed a gutsy fake punt direct snap from their own 28-yard line. Special teams coordinator Michael Clay has his work cut out for him this week ahead of the prime time clash with the Dallas Cowboys.

7.) The opening series featured a heavy dose of wide receiver A.J. Brown – three receptions for 32 yards to be exact – but curiously deviated from what appeared to be a successful blueprint. To be fair, Brown was targeted seven times, but the Eagles have to do a better job scheming up ways to get the ball into the hands of arguably its most explosive playmaker.

8.) Though I was never one to sound an alarm concerning the Eagles’ second half scoring scarcity, this was a game in which they needed points and managed just a pair of field goals. The game-clinching 17-play, 70-yard drive ate up 7 minutes and 58 seconds, but the Eagles need to find a way to parlay that into a touchdown. Hurts avoided a near-disaster when his third down throw to Quez Watkins in the end zone fell harmlessly incomplete with safety Jalen Thompson closing.

9.) After converting 4-of-15 third down opportunities (26.7%) a week ago, the Eagles’ third down efficiency proved problematic again, converting just 6-of-13 (46.2 percent). Offensive coordinator Shane Steichen and quarterback Jalen Hurts had been in such a rhythm that it didn’t much seem to matter – until now. If there’s a silver lining, it’s good to have these blemishes surface early in the season so that they can be corrected, but the Eagles offense is far too talented to stall so often.

10.) The Eagles once again dominated time of possession, 34:39 to 25:21. Their ball-control offense continues to churn out long marches.