Another Star Comes To L.A. As Rams Acquire Von Miller 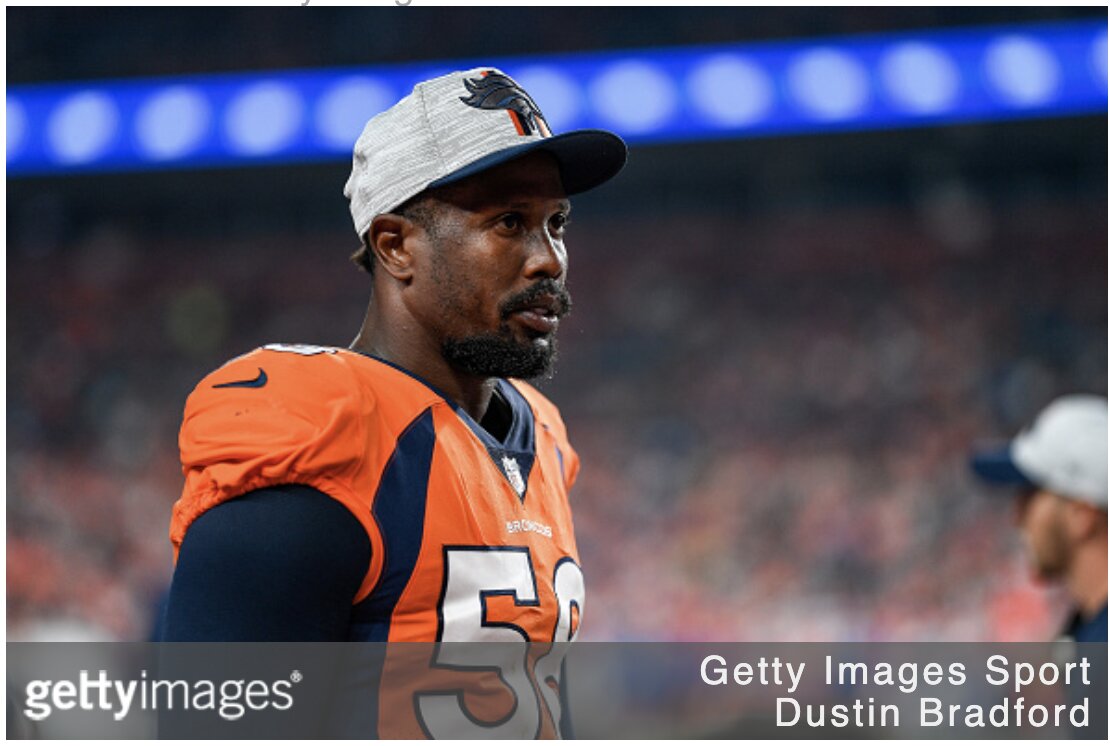 1) Los Angeles Rams (7-1; ranked last week: #2): Von Miller will help an already potent defense get even better. As of now, they’re my favorite to make the Super Bowl, which, BTW, will be played in their home stadium.

2) Green Bay Packers (7-1; ranked last week: #7): That was an amazing game last week and who could have believed the well-traveled CB Rasul Douglas would be the hero of the game for the Packers? While I still have some concerns about their defense, you have to respect their ability to find ways to win each week.

3) Dallas Cowboys (6-1; ranked last week: #4): Despite their injury issues and injury at QB, this team keeps on winning. Great job by their coaching staff to get the team ready each week during this six-game winning streak.

4) Arizona Cardinals (7-1; ranked last week: #1): Tough loss to the visiting Packers last week to be sure, but this Cardinal team has shown that they’re
pretty mentally tough.

5) Tampa Bay Buccaneers (6-2; ranked last week: #3): While their loss last week to the host Saints are a tough one, their bye came at the right time.

6) Tennessee Titans (6-2; ranked last week: #6): Another tremendous victory last week, but the loss of star RB Derrick Henry is going to be a major issue going forward. No team relies more on a running back than this team.

7) Buffalo Bills (5-2; ranked last week: #8): Their schedule continues to ease up until Week 11’s game against the visiting Colts.

8) Cincinnati Bengals (5-3; ranked last week: #5): See, you can’t trust this team. The true test of a young team is how they handle success and the Bengals loss last week to the host Jets proves they can’t be trusted.

9) Las Vegas Raiders (5-2; ranked last week: #9): Well, they’ll come off their bye this week with a nice two-game winning streak and face the struggling Giants on the road this week.

10) Baltimore Ravens (5-2; ranked last week: #10): Bad loss before their bye, but the Ravens are a resilient team and their schedule really eases up
over the next three weeks.

11) New Orleans Saints (5-2; ranked last week: #13): Great win, but a tough loss of starting QB Jameis Winston for the season. We’ll really get an
idea how good Taysom Hill is once he’s ready to play.

12) Los Angeles Chargers (4-3; ranked last week: #11): While I believe they are better than their record would indicate, they’ve given up over 30 points per game during their two-game losing streak. And let’s not forget they gave up over 40 points in their last win which was in Week 5 to the visiting Browns.

13) Pittsburgh Steelers (4-3; ranked last week: #16): That’s three wins in a row and their last one was a tough, hard-fought victory over the division
rival Browns, who had their number last season. However, the Steeler passing game remains a concern.

14) Kansas City Chiefs (4-4; ranked last week: #14): Well, at least their defense held up in Monday night’s win over the visiting Giants. However, the
offense continues to struggle, which no one saw coming into the season.

15) Cleveland Browns (4-4; ranked last week: #12): I still believe they’ll secure a Wild Card spot this season, but injuries on offense are really impacting them on that side of the ball.

16) New England Patriots (4-4; ranked last week: #22): They’ve now won three out of their last four games and are now very much in it for one of the three AFC Wild Card spots.

17) Carolina Panthers (4-4; ranked last week: #20): Nice win on the road last week and once they get star RB Christian McCaffrey back soon, the
Panthers will make a strong push for a Wild Card spot in the NFC.

18) San Francisco 49ers (3-4; ranked last week: #23): One of their better games last week against the host Bears. However, their injury concerns
aren’t going away.

19) Indianapolis Colts (3-5; ranked last week: #17): They really needed to win that game last week against the visiting Titans, but now instead of being just one game back in the AFC South they’re three games back.

20) Minnesota Vikings (3-4; ranked last week: #15): If you want to be a legitimate playoff team you have to beat a backup QB. That loss to the visiting Cowboys could be hard to recover from.

21) Seattle Seahawks (3-5; ranked last week: #24): Their defense is finally starting to come on, but they need star QB Russell Wilson back soon if
they want to make a legit run at a Wild Card spot.

22) Denver Broncos (4-4; ranked last week: #21): Does the Von Miller trade signal they’re punting on the season? While it might seem that way to
some team observers, the Broncos are still very much in the AFC Wild Card hunt and are currently just one game out of first place in their division.

23) Philadelphia Eagles (3-5; ranked last week: #26): They beat the lowly Lions last week, as they should have, but give their coaches credit for using
the players in the right way in order to dominate.

24) Atlanta Falcons (3-4; ranked last week: #18): The absence of WR Calvin Ridley was quite noticeable in last week’s loss to the visiting Panthers.

25) Chicago Bears (3-5; ranked last week: #19): The OL concerns won’t go away until they’re addressed in a major way next year. You would think after trading up for a QB in the first round that the OL would be a point of emphasis by GM Ryan Pace.

26) New York Jets (2-5; ranked last week: #29): What a remarkable win considering how it started for QB Mike White (2 INTs on their first two
offensive series). Let’s see how he does this week against the host Colts.

27) Washington Football Team (2-6; ranked last week: #27): QB Taylor Heinicke is like most backups. The more they play the more you’ll start to
see why they’re backups in the first place.

28) New York Giants (2-6; ranked last week: #30): They played at a high enough level to steal one on the road against the Chiefs. However, bad teams seem to find ways to lose, which is why their record is well below .500.