Led by first-year head coach Brandon Staley, a talented Chargers team will have to overcome a taxing cross-country trip and a seemingly revitalized Eagles team to end a two-game skid.

Coming off a resounding 44-6 win in Detroit, the Eagles will look to build on Sunday’s momentum before embarking on a favorable second-half slate. 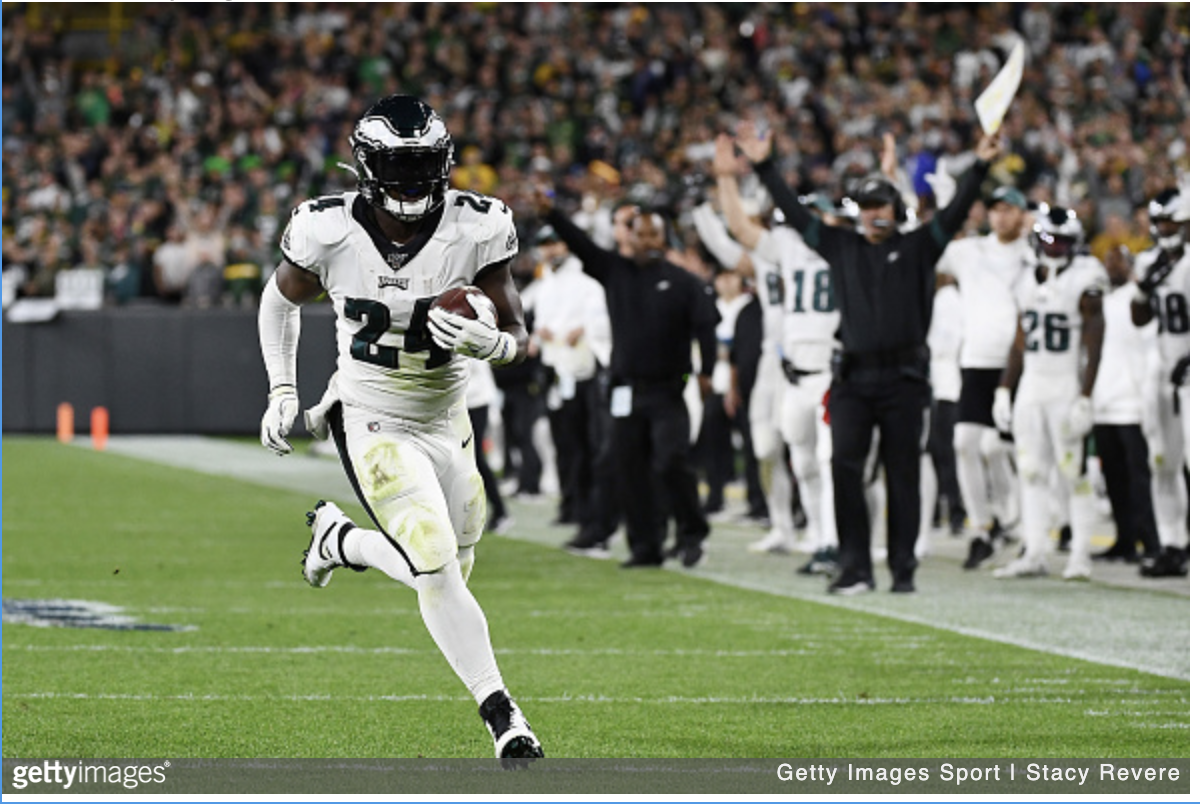 Jordan Howard should be a big part of the run game

WR DeVonta Smith vs. Chargers CBs: Starting cornerbacks Asante Samuel Jr. (concussion) and Michael Davis (hamstring) have been declared out, so veteran Chris Harris Jr. and 28-year-old journeyman Tevaughn Campbell get the nod this week. Harris offers inside-outside versatility and provides intelligence, savvy, and experience, and will likely see a lot of Smith, who hasn’t had trouble separating through eight games. Smith has only managed six receptions for 76 yards on 12 targets the past two weeks and will look to rekindle his connection with quarterback Jalen Hurts against a shorthanded cornerback group.

TE Dallas Goedert vs. Chargers linebackers: While most matchups favor the explosive fourth-year tight end, the big plays figure to be bottled up this week. The Chargers feature a pair of undersized, albeit fluid and athletic linebackers in the middle of the defense in Kyzir White and Drue Tranquill, while the dynamic safety duo of Derwin James and Nasir Adderley is the best in football. However, Goedert should still command around eight targets and rack up yards on short dump-offs, which accentuate his ability to churn out yards after the catch.

LBs T.J. Edwards, Davion Taylor vs. RB Austin Ekeler, TE Jared Cook: By waiving veteran linebacker Eric Wilson earlier this week, the Eagles committed to the young linebacking tandem of Edwards and Taylor. But while both players had active weeks against the Lions and figure to see the bulk of the snaps moving forward, expect the Chargers to exploit the Eagles’ limitations by making the slow-footed Edwards play in space and isolating the raw, inexperienced Taylor against their dynamic playmakers. I envision Taylor, in particular, struggling to contain Ekeler.

CB Darius Slay vs. WR Mike Williams: The 6-foot-4, 218-pound Williams leads the Chargers in receiving yards (517) and touchdowns (6). The Clemson product boasts outstanding leaping ability to reel-in 50/50 balls, innate body control, and a wide catch radius, so the Eagles must counter with the length and physicality of Slay to minimize his impact. Williams’ counterpart, Keenan Allen, will likely do most of his damage on short-to-intermediate routes, but Williams will have his number dialed up in the red zone.

The newly acquired Andre Roberts handles kick and punt return duties for the Chargers. The veteran wide receiver has returned three kicks for 71 yards and has yielded 7 yards on one punt return opportunity.

Kicker Dustin Hopkins was 1-for-1 on field goal opportunities and 3-for-3 on extra point attempts in his Chargers debut last week. Three of his five kickoffs have been touchbacks. Punter Ty Long has logged 1,148 yards on 12 punts (47.8 yards per punt).

Since 2001, the Eagles have won three of their last five meetings with the Chargers.

Eagles RB Jordan Howard: Playing in his first game since Week 16 of last season, a rejuvenated Howard compiled 12 carries for 57 yards and two touchdowns, bulldozing his way through the teeth of the Detroit defense with little resistance. The Chargers’ front seven is comprised of an aggressive front and undersized linebackers, so look for the Eagles to feature Howard’s bruising, downhill running early to establish a physical presence and control the game’s flow.

Chargers TE Jared Cook: The 13-year journeyman has yet to make a ripple on his latest team – he has yet to eclipse 70 receiving yards – but the Chargers can exploit his athleticism and imposing frame against an undersized Eagles second level. If Gannon opts to implement a game plan similar to last week in terms of aggressiveness, Herbert will make quick decisions and get the ball to his outlet receivers. Cook should thrive in the short-to-intermediate areas, and I suspect the Chargers will scheme ways to isolate him on the inexperienced Davion Taylor and pepper his side of the field with targets.

The Eagles bullied the Lions in the trenches last week, racking up 46 carries for 236 yards and four touchdowns on the ground and six sacks on defense. Offensively, I expect a similar approach against a vulnerable run defense, keeping Justin Herbert and a quick strike Chargers offense on the sideline. Hurts cashes in against an undermanned L.A. secondary to keep the offense in rhythm, catalyzing an unlikely victory.