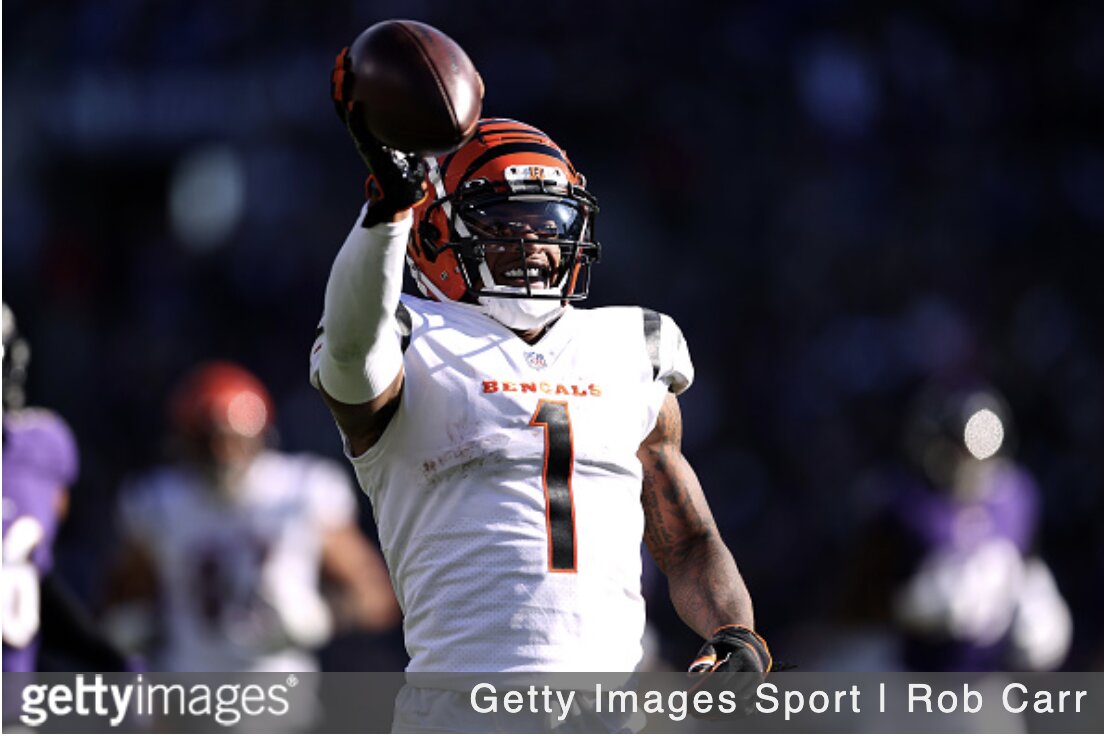 Ja’Marr Chase has the Bengals climbing the power rankings

1) Arizona Cardinals (7-0; ranked last week: #1): They found a way to dominate in the end after a shaky start to last week’s game. A great job by their coaching staff from navigating through a their COVID-19 situation lately.

2) Los Angeles Rams (6-1; ranked last week: #3): They’ve benefited greatly from a really good schedule of late (Seahawks, Giants, Lions, Texans), but the Rams will get tested in two weeks against the visiting Titans.

3) Tampa Bay Buccaneers (6-1; ranked last week: #5): Like the Rams, they haven’t played a tough schedule, but the Buccaneers continue to win despite some injury issues in their secondary.

4) Dallas Cowboys (5-1; ranked last week: #4): Their bye week came at the right time and some of their injured DLs could return this week.

5) Cincinnati Bengals (5-2; ranked last week: #9): Well, they finally did it and beat a good team on the road. How many of you had the Bengals as a
top-10 team this season?

6) Tennessee Titans (5-2; ranked last week: #10): When you dominate the Chiefs like they did last week, they deserve to be recognized as one of the
NFL’s best teams. And many outside the team don’t realize how banged up they are on both sides of the ball.

7) Green Bay Packers (6-1; ranked last week: #7): Their record obviously is very good and they do deserve credit for their success so far, but I’m not a
true believer yet that they’ll make a strong run in the playoffs.

8) Buffalo Bills (4-2; ranked last week: #6): As one of the NFL’s healthiest teams, the Bills will continue to be a contender this season despite their loss
to the Titans before the bye week.

9) Las Vegas Raiders (5-2; ranked last week: #11): Well, you can’t ignore them any longer. They’ve put the Jon Gruden situation behind them and enter their bye week on a nice roll.

10) Baltimore Ravens (5-2; ranked last week: #5): They were living dangerously after slim wins over the Lions and Colts, but reality hit them against the visiting Bengals.

11) Los Angeles Chargers (4-2; ranked last week: #8): Hopefully HC Brandon Staley has figured out their issues on defense coming out of their bye.

12) Cleveland Browns (4-3; ranked last week: #13): Their injury issues on both sides of the ball are very concerning and had 20 players listed on their injury report coming into last week’s game.

14) Kansas City Chiefs (3-4; ranked last week: #12): They were awful on the road last week on both sides of the ball and their defense has given up at least 27 points in all but one of their games through Week 7.

16) Pittsburgh Steelers (3-3; ranked last week: #18): The bye week should do them a lot of good in terms of health for a few previously injured players.

17) Indianapolis Colts (3-4; ranked last week: #21): Don’t make the mistake of thinking that they won’t grab one of those three AFC Wild Card spots. The Colts are really playing good football and could make the AFC South very interesting if they beat the visiting Titans on Sunday.

18) Atlanta Falcons (3-3; ranked last week: #24): They’ve won three out of their last four games, albeit against bad teams. But at least we’re seeing improvement after a bad start.

20) Carolina Panthers (3-4; ranked last week: #16): That’s four losses in a row and a lot of that can be attributed to QB Sam Darnold’s struggles and the absence of star RB Christian McCaffrey.

21) Denver Broncos (3-4; ranked last week: #19): They’re a good QB away from being a solid playoff contender—and that will come next year.

23) San Francisco 49ers (2-4; ranked last week: #20): That’s four losses in a row and we continue to see struggling QB performances from this team.

24) Seattle Seahawks (2-5; ranked last week: #23): Gotta give their defense credit for its performance, but the struggles of journeyman QB Geno Smith came to the surface in Monday night’s loss to the visiting Saints.

25) Washington Football Team (2-5; ranked last week: #25): That’s three losses in a row and this team is not showing any signs of improvement.

26) Philadelphia Eagles (2-5; ranked last week: #26): Now the Eagles have lost five out of their last six games and their defense is almost getting to the non-competitive point.

27) Jacksonville Jaguars (1-5; ranked last week: #28): Well, they had a nice win before the bye, but the reality is that this is close to an expansion team in talent. They’re at least a few really good drafts away from competing for a playoff spot.

28) Detroit Lions (0-7; ranked last week: #30): They gave the Rams a good test and once again, the Lions are a competitive team despite their bad record.

30) New York Giants (2-5; ranked last week: #31): Nice win last week for Big Blue, but it doesn’t change the fact that they’ve been a huge disappointment this season, perhaps one of the biggest ones this season.