The Eagles ended their losing streak and escaped Charlotte with a win Sunday despite an incredibly shaky first half of football.

On the latest Inside The Birds podcast, Geoff Mosher and Adam Caplan explained their offensive and defensive takeaways and highlighted the importance of the blocked punt. 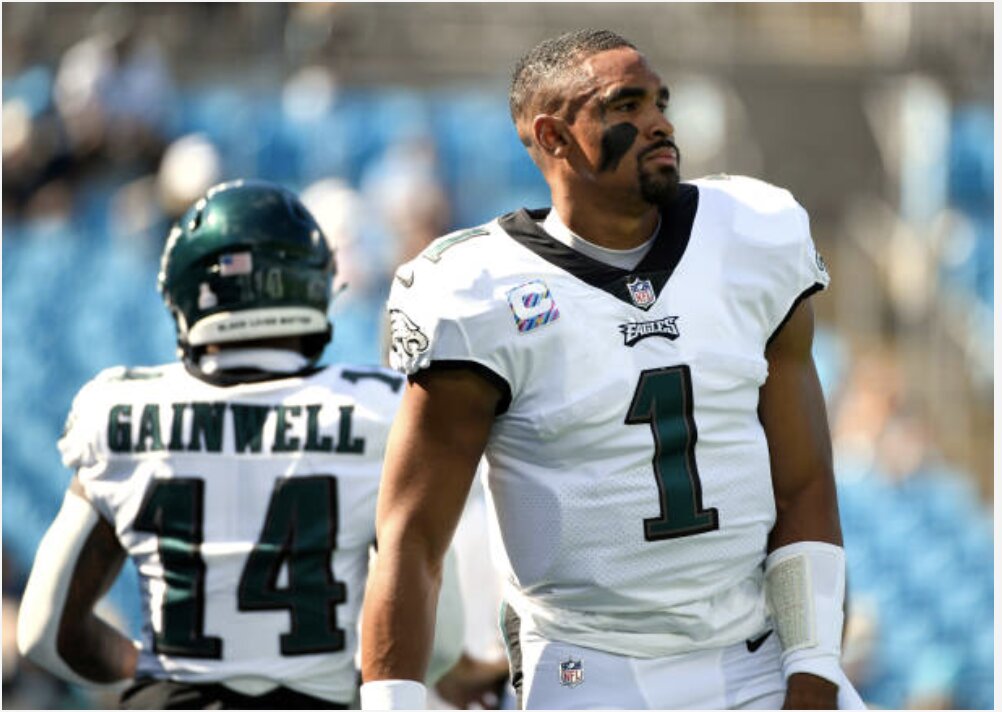 Geoff Mosher: “Does [Nick Sirianni] have to run so many RPOs because he feels he has to scheme up everything for Jalen Hurts? If this is an evaluation year and you want to find out what Jalen Hurts is, why don’t you just let him conventionally drop back, let him be him, and see if he can handle it?

Adam Caplan: “Terrific question. In fact, [Greg] Cosell talked about it in our pregame show because Greg said the one issue where Hurts is really struggling, it was in particular the last game, where he played well though, he said he drops his eyes too much, what that tells us folks is [he’s] not seeing the field, you’re not getting a clear picture when you drop your eyes.”

Mosher: “Speaking of coaching, there’s one thing I got a bone to pick with. When players make mistakes, I put them on the players for the most part, I really do. When they’re repetitive though, I say, well then somebody is not getting through to them. For the second straight week, they get a touchdown negated — and the Eagles must lead the NFL in touchdowns wiped off the board — for the second straight week on an illegal pick and this one was actually worse than [JJ. Arcega-Whiteside’s] because there was absolutely no reason Greg Ward needed to even touch that guy. That’s a touchdown just by him running his route. So that happens two weeks, we’ve seen two touchdowns by two different wide receivers taken away because both of them stepped out of bounds. That’s discipline, that’s knowing your assignment. And if you’re not doing that repeatedly, to me there’s something going on there where you don’t feel accountable to your coach. So whether it’s Aaron Morehead, whether it’s [Nick] Sirianni, who’s a former wide receiver, or [Kevin] Patullo. I don’t know. But this wide receiver group makes so many damn mistakes I don’t know how these guys don’t pull their hair out of their head.”

Mosher: “The defensive line for the Eagles was good and not just good because they’re talented and you saw Fletcher Cox get a sack and [Javon] Hargrave get a sack. This is one of those things where I throw my hands up and I don’t understand. What we thought we were going to see from a line-movement standpoint from Day 1 — stunting, twisting, using that defensive line to get across those guards and tackles and get to either the running back or the quarterback — you finally saw it. They were very active up front and I just kept thinking, ‘This is how you were supposed to be in every game. This is what you need to be, why did you wait until now to do it ?’ But it worked. I mean they really took advantage of a bad Carolina Panthers offensive line.”

Caplan: “The head coach, who’s the play caller, and the defensive coordinator, they’ve had their ups and downs of play calling, they’re new to this. It’s not an excuse, it’s just the reality that there are gonna be some games where you pull your hair out and go, ‘What is wrong with this guy?’ That’s just life when you’re a first time play caller, it’s tough. I’m sure [Gannon] has had input from [Matt] Eberlfus or maybe [Mike] Zimmer, whoever he’s worked for in his life, whether it’s college or pros. He believes in a certain system. I’m just shocked that he’s not aggressive like Zimmer is with the Double-A gap [blitzes], supposedly Zimmer doesn’t do it as much as he used to but nevertheless he knows that Zimmer has done it and he worked for Zimmer.”