Clean This Up, Nick 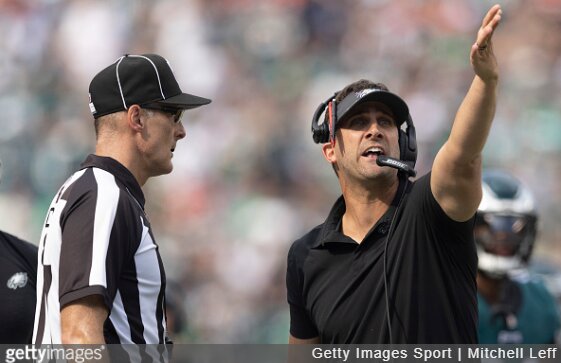 Trailing by six with five minutes, 54 seconds left in regulation, an undermanned Eagles team seeking an improbable comeback from down 21 points had suddenly found life.

Quarterback Jalen Hurts had just capped a seven-play, 54-yard scoring possession by calling his own number from two yards out, followed by a successful two-point conversion to wide receiver Quez Watkins.

With the lead trimmed, responsibility fell on the defense to stop the unraveling.

Even with a deck stacked heavily in Tampa Bay’s favor, and the Eagles’ season effectively on life support,  a glimmer of hope remained.

On the Bucs’ first possession, Leonard Fournette took a first-down handoff that netted just two yards, which could have helped force the Bucs into an eventual punt, but that vision blurred when Eagles linebacker Genard Avery blatantly gave Fournette an earful after the play – a costly 15-yard taunting penalty that advanced Tampa Bay to near midfield.

Instead of 2nd-and-8 deep in their own territory, Brady and the Bucs were given a second chance as the Eagles committed yet another personal foul penalty, adding to their long and growing list.

“Yeah, that’s first on me,” head coach Nick Sirianni acknowledged after the game. “I got to do a better job of cleaning up all those things. We know we can’t make those self-inflicted wounds. I know that, they know that. We’ll continue to harp on that and work to get it right.”

It’s a familiar refrain from the first-year head coach.

The NFL has taken a firm stance against taunting this season, so it’s imperative the Eagles demonstrate improved discipline to avoid putting the team in harm’s way. The Eagles have shown they’re not talented enough to overcome self-inflicted mistakes.

“Again, that was unacceptable and that falls on me first,” Sirianni added. “I have to do a better job getting everybody doing the right things out there and keeping our composure out there.”

The penalty ended up being costlier than 15 yards.

On a must-have 3rd-and-7 from Philadelphia’s 47-yard line, Brady rolled to his right and fit the ball into a tight window to Antonio Brown between Rodney McLeod and Marcus Epps for a 27-yard completion to ice the game. Epps came so close to a fingertip deflection of Brady’s pass, but the first down instead allowed the Bucs to kneel out the clock.

“We had a double on [Brown],” McLeod said. “We went into the game and said we have that in our back pocket if we need to use it. We felt that it was a great time in that moment. Tom had been connecting with him pretty often and we felt as though we need to take him away.

“He just made an amazing play, honestly. Obviously, he got outside of the pocket and threw it and great catch.”

His taunting penalty became the latest in a perpetual trend of weekly infractions that have squandered opportunities for the Eagles in critical moments. They lead the NFL  in penalties and rank second in unnecessary roughness.

If the trend isn’t reversed, the losing won’t be either.