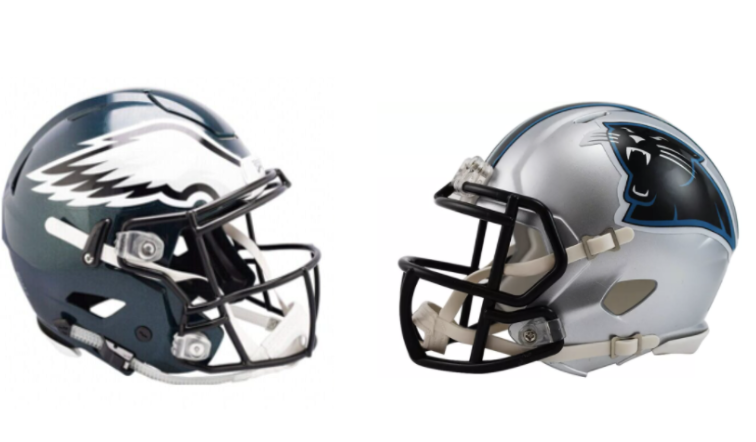 The Philadelphia Eagles (1-3) travel to Charlotte, N.C., for a Week 5 matchup against the Carolina Panthers (3-1) at Bank of America Stadium for a 1 p.m. start.

The upstart Panthers are coming off a disappointing 36-28 loss to the Dallas Cowboys, while the Eagles are looking to build on last week’s promising offensive performance and add to the win column for the first time in four weeks.

Eagles RT vs. DE Brian Burns: Nick Sirianni has strategically withheld his latest offensive line configuration for this week, but whoever starts for Lane Johnson – Jack Driscoll or Jordan Mailata – draws a potential game-defining matchup with one of the NFL’s ascending young pass rushers. Burns (6-5, 250) fires off the ball with urgency and wins with speed, lateral agility, and hand usage. Burns tallied a sack in each of Carolina’s first three games while also notching 3.0 tackles for loss and four quarterback hits. His explosiveness and burst off the edge could hastily flush Hurts out of the pocket and lead to ill-advised throws.

TEs Dallas Goedert, Zach Ertz vs. Panthers LBs: Last week’s game plan featured a sizeable dose of the Eagles’ revered two-headed tight end tandem, specifically on short, quick throws to move the chains and get Hurts into a rhythm. Versatile Panthers LB Shaq Thompson is out, so look for the Eagles to try a similar approach in an effort to exploit the middle of the field and generate early traction on offense. Ertz and Goedert combined for 11 receptions for 116 yards and a touchdown on 13 targets against Kansas City.

DT Javon Hargrave vs. Panthers’ IOL: Hargrave has been a consistent force in the middle of the defensive line and faces a favorable matchup against a relatively pedestrian interior offensive line for the Panthers. Hargrave has registered 12 tackles and 3.0 sacks over the past two weeks and his game-wrecking penetration will be vital in moving Sam Darnold off his spot, expediting his reads, and disrupting the timing of his throws. If Hargrave continues his early-season dominance, expect a defensive takeaway or two.

CB Steve Nelson vs. WR Robby Anderson: The speedy Anderson has historically been a streaky player and that trend has perpetuated through four weeks. While Anderson doubled his season target share (11) last week, he reeled in only five receptions for 46 yards in the 36-28 loss to the Cowboys. Anderson has yet to top 57 receiving yards this season, though that could easily change Sunday. A maligned Eagles secondary, which was just victimized by the explosive Tyreek Hill in Week 4 to the tune of 12 catches for 186 yards and three touchdowns, could face similar challenges when the Panthers look to push the ball vertically. Anderson figures to see plenty of Steve Nelson in this matchup. Nelson, while providing a hard-nosed, physical presence on the perimeter, lacks the ideal fluidity and long speed to run stride-for-stride with Anderson

The Panthers kick returner is running back Chuba Hubbard and punt return duties belong to wide receiver Alex Erickson. Hubbard has returned one kick for 21 yards while the shifty Erickson has yielded 72 yards on nine opportunities. Kicker Zane Gonzalez is 3-for-5 on field goal opportunities (60%) and 9-for-10 on extra point attempts. Seven of his 16 kickoffs have been touchbacks. Punter Joseph Charlton has logged 632 yards on 16 punts.

For Philadelphia, wide receiver Quez Watkins handles kick returns and wide receiver Jalen Reagor has been fielding punts. Watkins has managed 74 yards on five returns while Reagor has mustered 30 yards on nine opportunities. Jake Elliott is 5-of-6 on field goal opportunities (83.3%) and 9-for-9 on extra point attempts. Thirteen of his 20 kickoffs have been touchbacks. Punter Arryn Siposs has been outstanding, accruing 647 yards on 14 punts (zero punts last week).

Eagles RB Kenny Gainwell: Gainwell has clearly earned the trust of his coaches and has become the preferred option over Miles Sanders in critical moments. Gainwell should provide value as an outlet receiver for Hurts. Gainwell’s receiving prowess, combined with his impressive vision, decision-making and straight-ahead running style, will allow him to keep eating into Sanders’ snaps this week. On nine touches, Gainwell accounted for 89 total yards last week.

Panthers WR Terrace Marshall: The Panthers’ second-round pick has only caught 11 passes for 93 yards on 17 targets, but he draws a favorable matchup this week. The big-bodied Marshall (6-2, 200), a supremely athletic pass-catcher with a wide catch radius, should see plenty of the 5-foot-9 Avonte Maddox on Sunday. Maddox notoriously struggles defending lengthy, physical wide receivers with speed, so Marshall could present a unique challenge if factored into the game plan. The Panthers’ rookie wideout has been relatively quiet through the first four weeks but could see an uptick in targets in a plus matchup against the Eagles.

The Eagles meet the 3-1 Panthers in a week in which the Panthers could be without as many as six starters. Nick Sirianni rebounded from a dismal showing in prime time and crafted a balanced plan of attack while Jalen Hurts commanded a revived Eagles offense that consistently moved the ball against the Chiefs, despite the loss.

Given the increased scrutiny this week, I’m interested to see how defensive coordinator Jonathan Gannon responds. The defensive line will have opportunities to get to Sam Darnold, which could ultimately be the deciding factor.