The Eagles handled the Jets on Sunday even without their starting quarterback as they went to North Jersey and returned with a 33-18 win.

On the latest Inside The Birds podcast, Geoff Mosher and Adam Caplan gave sourced tape breakdown of the offense and defense: 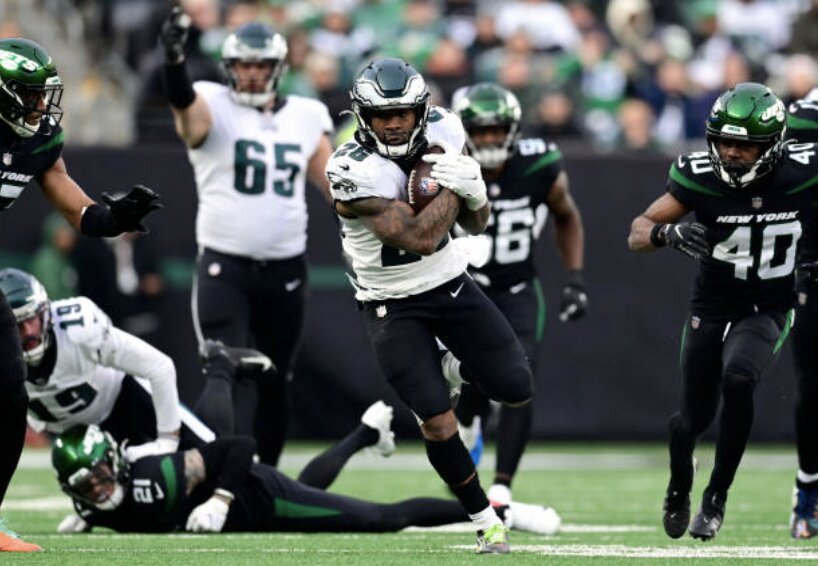 Getty Images: Miles Sanders ran for a career-high 120 yards vs. the Jets

Geoff Mosher: Gardner Minshew – accurate ball, reads the defense well, knows where to go, delivers quickly. I think you saw all of that. Not the strongest arm in the world. Actually, we’ve talked about Jalen Hurts’ arm strength not being the best, I don’t even think Minshew has a Jalen Hurts arm. There’s just not a whole lot of torque on the ball.”

Adam Caplan: “Minshew has great touch on the ball. Remember what [Jason] Avant said about catching fastballs from quarterbacks and that receivers hate that. I love his line about how he loves quarterbacks who throw it like it is catching a pillow. That’s exactly how Minshew plays.”

Mosher: “Miles Sanders had a nice game. He had to work for it a lot, and I think he proved that he can handle a workload over 18-to-20 carries. He didn’t turn the ball over, didn’t drop any passes and ran tough. That’s a consistent theme that you and I talked about going back to last year. Greg Cosell even talked about it watching the tape that he doesn’t get enough credit for the tough running. People kind of take that dancing carrot and run with it a little bit, but it is not true.”

Caplan: “Yeah the tape confirms it […] a source said he might have left 15-to-20 yards on the field overall by not hitting the right gap, was still outstanding, especially considering he was playing on that bad ankle. Here are the notes from two sources: ran with tremendous velocity and power, vision, finished runs, great job setting up blocks, running to daylight. Very patient, then hit it extremely hard. He never did this in 2019, as explosive as he looked as a rookie.”

Mosher: “Rewatching the game, it was sort of surprising that they wouldn’t come after a rookie quarterback who’s been struggling a little bit more. At the end of the day, they gave up 18 points, though.”

Caplan: “Pretty good. The thing that has gotten lost in sauce lately, I know they’re not getting a lot of sacks, but their pressure numbers are pretty good. [Javon] Hargrave, this is the best game he’s probably had in 6-to-8 weeks. He was really good. What I said on our Monday show is I want to see more of this. I don’t know what happened to him until this game. He’s really good in this game. He was pretty dominant. His get-off was good and [the Jets] had trouble with him no doubt about it. Other than Hargrave to start the season it was a pretty disappointing start for their D-Line in some games. I know they’re not getting the sack numbers as I said, but it is their buy-in terms of gap control and not giving up the big runs.”

Caplan: “DB-wise, obviously they got off to a bad start. The thing that I don’t understand and I don’t know if it’s because of [Steven] Nelson’s injury is they still played a lot of zone, where they’ve been playing a lot of man, they played a lot of zone. They gave up too much room early, you could see it off TV actually. You can’t see very much on TV, that’s legit, but you can see this off TV. They were playing off [coverage] and they gave him too much room. Then in the second half they made some adjustments and, boy, [Zach] Wilson looked confused. He looked like a rookie quarterback that shouldn’t have been out there and they shut him down in the second half.”