“Biggest Ass-Kicking Offensive Line Has Given”

Coming off one of the most dominant Eagles wins in years, Geoff Mosher and Adam Caplan took a closer look at how the Birds scored a 44-6 win over the Lions in Detroit.

On the latest Inside the Birds podcast, Geoff Mosher and Adam Caplan gave their sourced tape review and discussed trade deadline happenings. 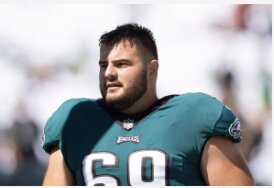 Geoff Mosher: He’s a cornerback. He was a seventh-round pick this year of the Broncos and went to LSU. So I guess he was a teammate of Jacoby Stevens, the Eagles seventh-round pick. Although he opted out, so he did not play last year. The Eagles, if you look at their roster of cornerbacks now — Mac McCain, Tay Gowan and this guy that they just brought in as well as Andre Chachere, who’s able to be a corner or safety — they’re really just trying to get as many young cornerbacks who have great upsides, maybe great traits, and for whatever reason fell in the draft and hoping that maybe one or two of them pans out.

Adam Caplan: “Here’s the deal with Vincent. Here’s our scouting report from two scouting sources. Twitchy guy, small guy, slot corner. As one [listener] said, “How about safety?” He says he’s too small. There’s nothing in his bio that would say safety unless you filled his body up. He is a nickel corner, he’s small but twitchy. Five-foot-10, very competitive, he opted out last year which didn’t help him, so had he played last year — unless he was terrible — would’ve went in the fifth round. He is small but he’s got talent.”

Caplan: “There was definitely interest in Alex Singleton. I’m not saying a ton. I know there was at least one AFC team that was looking into, for their scheme, a guy like Singleton. It didn’t go anywhere. I just know that they had some interest in him. That’s when I said it on one of our shows that he might be moved because we knew that his role was going to be chopped a little bit. We didn’t quite understand at the time. We found out 10 days ago exactly what that would look like.”

Caplan: “This was the biggest ass-kicking their offensive line has given in two years. I know there were some games last year where they played well but this was embarrassing. The Lions looked like a JV team compared to the Eagles’ offense, their defensive line got moved, double-teams, you name it. Jeff Stoutland had it all going on and Landon Dickerson looked like a top-10 pick in this game. He absolutely killed it.”

Mosher: “Yes, he did and run blocking, he was a monster, just a monster. Then there were times where he and Jordan Mailata, there would be a run to the left and those guys were like two bulldozers just going through a field of small, tiny trees.”

Mosher: “I think that they found the right formula. The right formula is playing T.J. Edwards earlier and more on first and second down. Remember, the whole thing with the Eagles’ defense is you can’t get a pass rush going if the team is constantly in 2nd-and-3 and 3rd-and-1 or it’s if it’s first down, that’s what it had been. You’ve got to stop the run and Eric Wilson was terrible at stopping the run. And by the way, his coverage wasn’t good either and that was supposed to be something that he was good at. He was just doing nothing that was helping the team. So, by the way, credit to the coaches, because I know it’s difficult when you have a free-agent signing, not that he was a huge free agent signing, only for one year, but you tend to want to play those guys and and stick with him to legitimize the fact that you signed him. But no, they sat him down.