With the NFL Draft merely hours away, I constructed one final mock draft.

You can look here for version 1.0 and version 2.0 of the Andrew DiCecco mock drafts.

Let’s get it started: 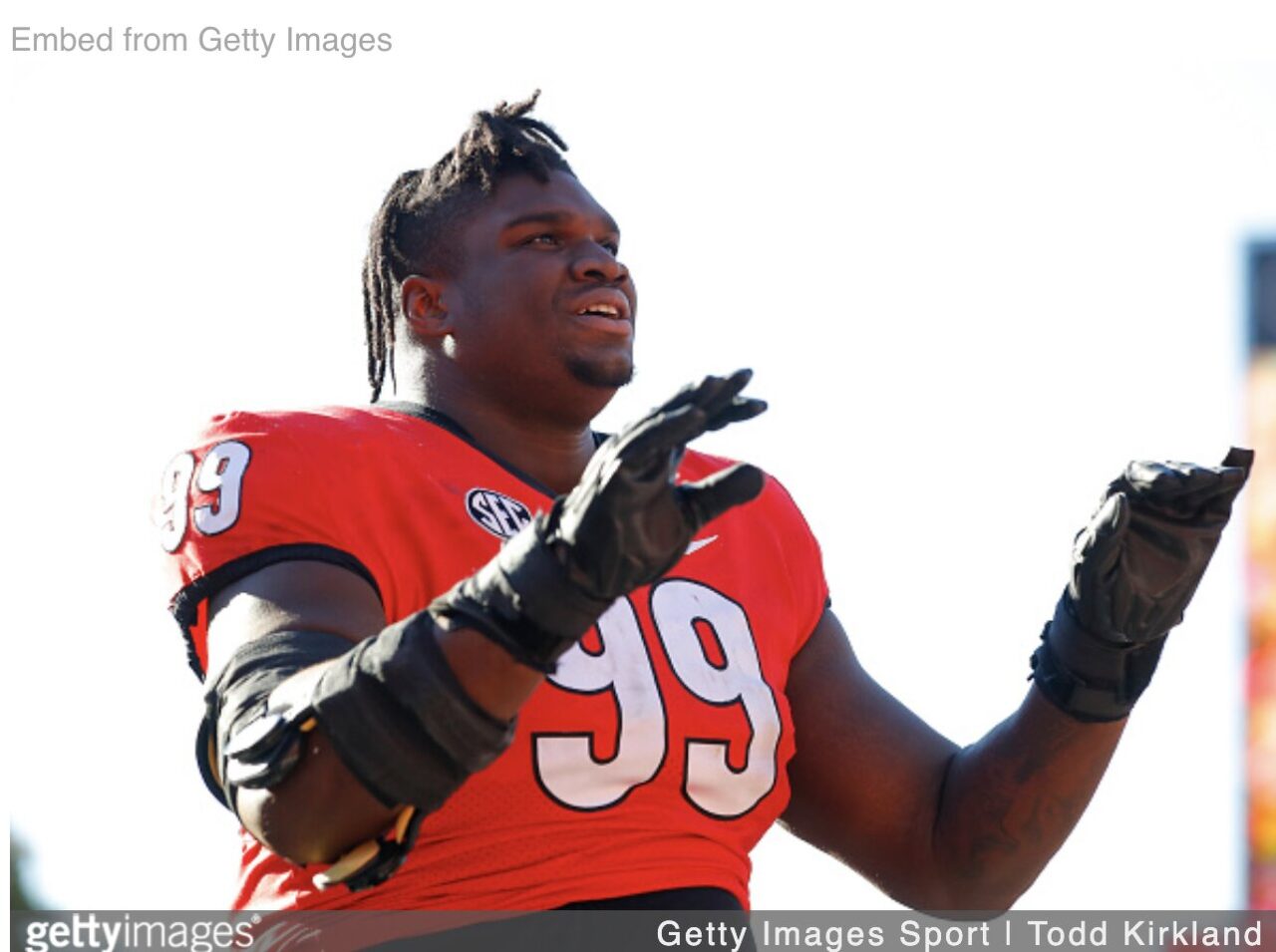 Mammoth DT Jordan Davis could be the Eagles’ pick at 15.

Despite posting superhuman testing numbers at the NFL Scouting Combine, Jordan Davis (6-6, 341) is somewhat of a polarizing prospect. The snap reduction at the collegiate level suggests a multitude of things and is a viable cause for concern, and teams will likely be conflicted on Davis’ upside at the pro level. However, it’s hard to look past his game-wrecking potential. Even if Davis doesn’t get home with regularity, his ability to push the pocket, move quarterbacks off their spot, absorb double teams, and create opportunities for teammates to make a play makes the invest worthwhile. If I’m the Eagles, and he’s on the board, I’m sprinting to the podium.

The Eagles snag the most refined route runner in this draft class in Olave, the 6-foot, 187-pound pass-catcher from Ohio State. Olave is a smooth technician who can impact all three levels of the field and gets in and out of breaks with little wasted movement. This late in the game, the Eagles have them positioned themselves in such a way to where they almost must take a receiver early to find an adequate pairing with DeVonta Smith. Adding Olave across from Smith – with Quez Watkins operating at the No. 3 – gives the Eagles much more flexibility offensively.

I admittedly have Brisker going in the 40-50 range, but every year there are always players who slide for one reason or another. In Brisker, the Eagles get a player with Malcom Jenkins-like versatility who continually has improved in every facet of his game over the past two seasons. The Eagles left themselves vulnerable with the current safety tandem of Anthony Harris and Marcus Epps patrolling the deep middle, so this feels like the year the team acts quickly to add a premier talent at the position. 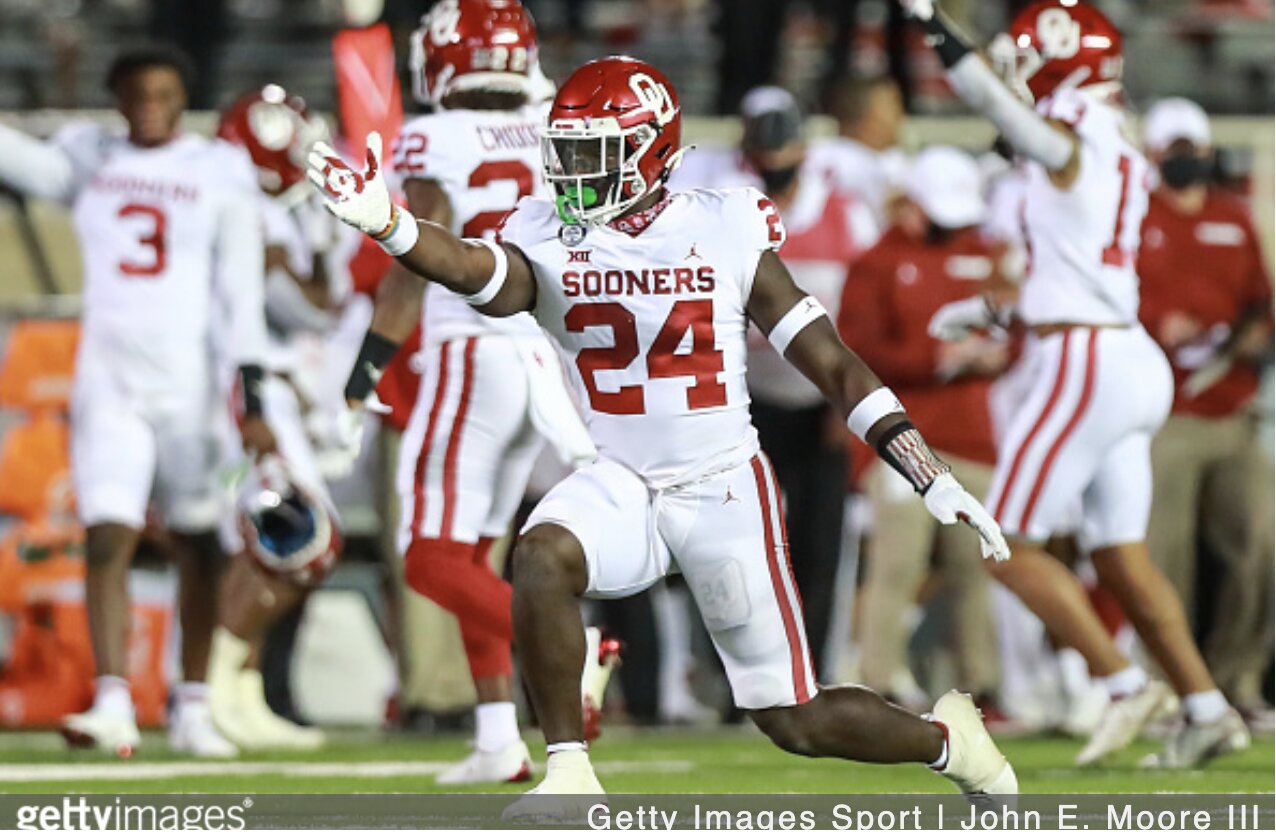 Oklahoma product Brian Asamoah would be an ideal LB prospect for the Eagles.

The team’s aversion to rectifying the ongoing linebacker dilemma has been well documented. While I don’t have them devoting a first- or second-round pick to shoring up the position, they stumble on tremendous value in the third-round in Asamoah. The former Sooner is undersized for the position (6-0, 226) but his instinctiveness, processing, sideline-to-sideline range, and coverage acumen translates favorably the new age NFL.

Believe it or not, McCollum (6-3, 200) actually began the pre-draft cycle as a sleeper. However, he widely became a household name after clocking a 4.33 40-yard dash time, posting a 39.5-inch vertical, and 6.48 3-cone drill at the NFL Scouting Combine along with dazzling in the on-field portion of the workout.

I’ve mentioned this before, but I believe McCollum will be drafted higher than his fourth-round projection. It only takes one team to fall in love with his intriguing athletic profile, production, and football intellect. The Eagles desperately need to find a suitable complement to Darius Slay, and long-term building block, and with his ball skills, length, hip fluidity, and confidence in his technique, McCollum gives you a moldable prospect to fit that bill.

Miles Sanders sits atop the running back depth chart for at least one more season, with Boston Scott, Kenny Gainwell, and Jason Huntley rounding out the unit. However, only Gainwell figures to be in the team’s long-term future, so it would make sense for the Eagles to be proactive and add another runner to the stable.

In White, the Eagles would be getting the big-bodied power runner they so sorely need. White (6-0, 214) doesn’t offer blazing home-run hitting explosiveness, but the former Sun Devil is more than equipped to handle early down and short-yardage work as a rookie. Really noticed his contact balance working through traffic and his knack for finishing runs.

With Andre Dillard potentially facing an uncertain future and Le’Raven Clark hardly a lock to make the team, I envision the Eagles feeling compelled to add another young tackle for Jeff Stoutland to develop. Waletzko (6-8, 312) started 10 games at left tackle last season for the Fighting Hawks and offers enticing length and power. Waletzko is still a bit of a raw prospect, but if anyone can help him realize his potential, it would be Jeff Stoutland.

This time last year, the Eagles added Coastal Carolina edge rusher Tarron Jackson on Day 3. This year, I have them double-dipping at the position (and school), snapping up his former teammate, Jeffrey Gunter, to bolster depth. Gunter, a compactly built, 6-foot-4, 260-pound prospect, won’t overwhelm with intriguing athletic traits or length. However, he typically wins with power and leverage, and his most glaring proficiency is his ability to set the edge against the run. He’ll need to add more size to his frame for long-term sustainability, but Gunter has enough tools to see the field as a rookie. Over the past three seasons, Gunter has accumulated 35 tackles for loss, 17 sacks, and nine forced fumbles for the Chanticleers.

Beyond Dallas Goedert, the Eagles’ tight end room includes Jack Stoll, Noah Togiai, Richard Rodgers, the recently converted J.J. Arcega-Whiteside, and a rehabbing Tyree Jackson. Aside from Stoll, none of the aforementioned players are assured of a spot on the 53-man roster, so look for the Eagles to address the position at some point on draft weekend. Last season, Bellinger (6-5, 253) reeled in a career-high 31 receptions for 357 yards and a pair of touchdowns, and compiled a 4.63 40-yard dash, 34.5-inch vertical, and 22 reps on the bench press at the NFL Scouting Combine.

Bellinger isn’t overly explosive, but he demonstrates strong hands and a willingness, he can affect the short-to-intermediate levels of the field, and would represent another viable red-zone option and security blanket for Jalen Hurts.

The Eagles take a late-round flier on the 6-foot-2, 212-pound Bell. A Bridgeton, N.J. native, Bell totaled 95 tackles, a pair of sacks, and an interception over 12 games last season for the Rattlers. At the NFL Scouting Combine, Bell turned in a 4.41 40-yard dash and logged a 36.5-inch vertical. Given his intriguing size and athleticism, Bell would theoretically be given a fair shake to unseat K’Von Wallace for a depth role.