Armed with three first-round picks in the 2022 NFL Draft, the Eagles are positioned to restock a barren cupboard with future building blocks.

These decisions could ultimately shape the franchise for the foreseeable future, so I spent some time assessing the roster and constructing the second edition of  “DiCecco’s Mock Draft.” 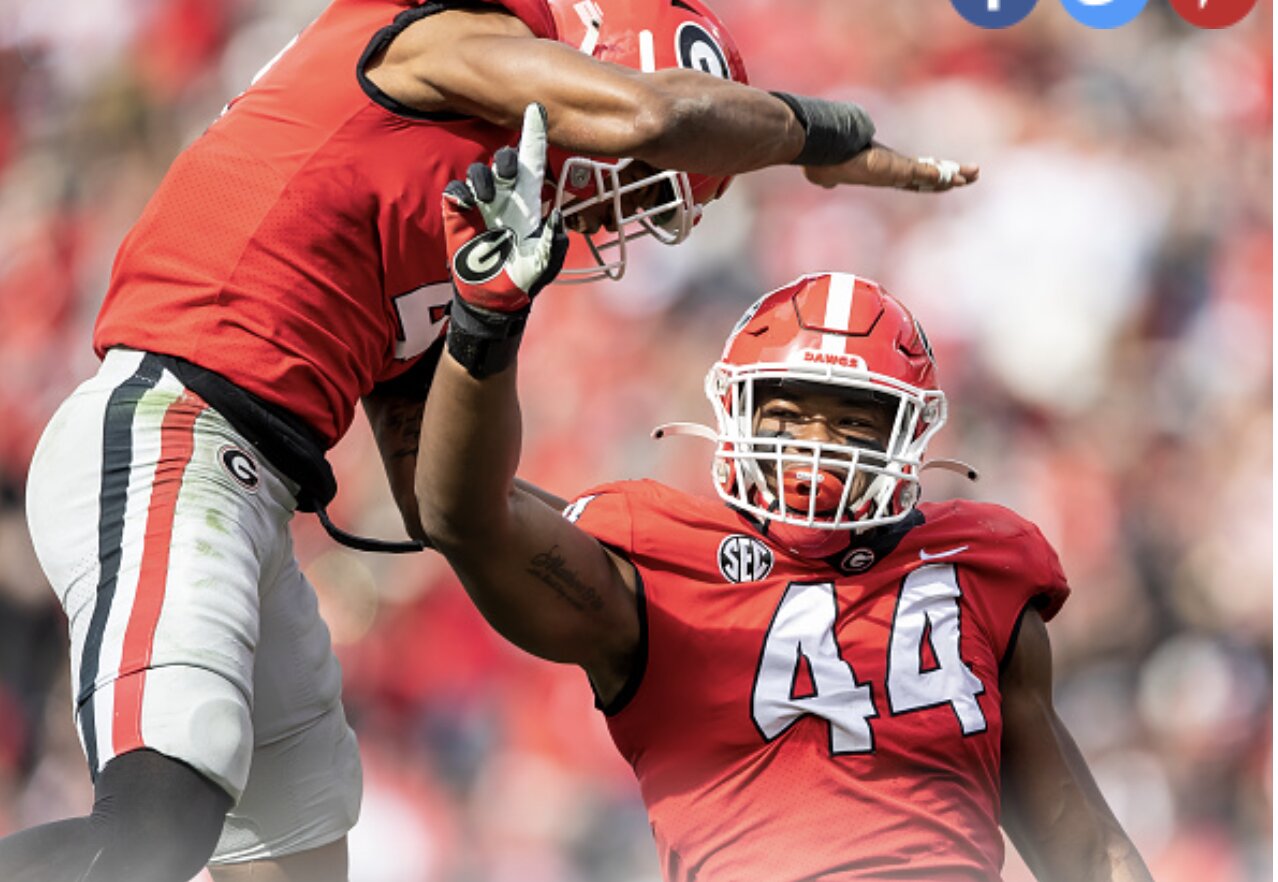 Getty Image: The Eagles can address the trenches in Round 1 with Georgia’s edge rusher, Travon Walker

Walker, among the premier standouts of the NFL Scouting Combine —  running a 4.51 40-yard dash and logging a 35.5-inch vertical along with a 6.89 3-cone time – gives the Eagles a plug-and-play starter who boasts positional versatility. Lengthy, powerful at the point of attack, wins by creating leverage, and has the ability to covert speed-to-power. Walker, along with last year’s third-round pick Milton Williams and 24-year-old Josh Sweat, gives the team a trio of talent-laden prospects for the foreseeable future.
DiCecco 1.0 pick: Tyler Linderbaum, iOL, Iowa

The Eagles address the trenches with back-to-back picks, adding a blue-chip center/interior lineman to pair with the team’s young centerpieces, including guard Landon Dickerson and tackle Jordan Mailata. At 6-foot-3, 290 pounds, Linderbaum fits the mold of revered Eagles center Jason Kelce, and in many plays the game with the same gritty, yet shrewd, mentality. The former Hawkeye is a high-IQ player who possesses All-Pro upside.
DiCecco 1.0 pick: Travon Walker, Edge, Georgia

Amid a talented, and crowded, pool of blue-chip cornerback prospects, Clemson’s Andrew Booth has seemingly become the forgotten man, with Cincinnati’s Sauce Gardner and LSU’s Derek Stingley Jr. – and recently, Washington’s Trent McDuffie — dominating headlines. A talented cornerback will inevitably slide, and as of this moment, my money would be on Booth. With veteran cornerback Steve Nelson primed to test the open market, the Eagles now have an opportunity to add a long-term solution to complement four-time Pro Bowler Darius Slay. Booth offers the desired length, hip fluidity, and ball skills to defend the perimeter at a high level.
DiCecco 1.0 pick: Roger McCreary, CB, Auburn

At long last, the Eagles invigorate a lackluster second level with a difference-maker. Muma, a pre-draft riser, looks to follow a path similar to that of fellow Wyoming alum Logan Wilson, an ascending third-year linebacker of the Cincinnati Bengals. The 6-foot-3, 240-pound Muma boasts the sideline-to-sideline range, tackling prowess, football intellect, and coverage acumen necessary to thrive in the new-age NFL. The Eagles need to add a pair of starting caliber linebackers – especially with the team’s decision not to tender Alex Singleton – and they’ll have a chance to finally fortify the position with a building block.
DiCecco 1.0 pick: Christian Harris, LB, Alabama 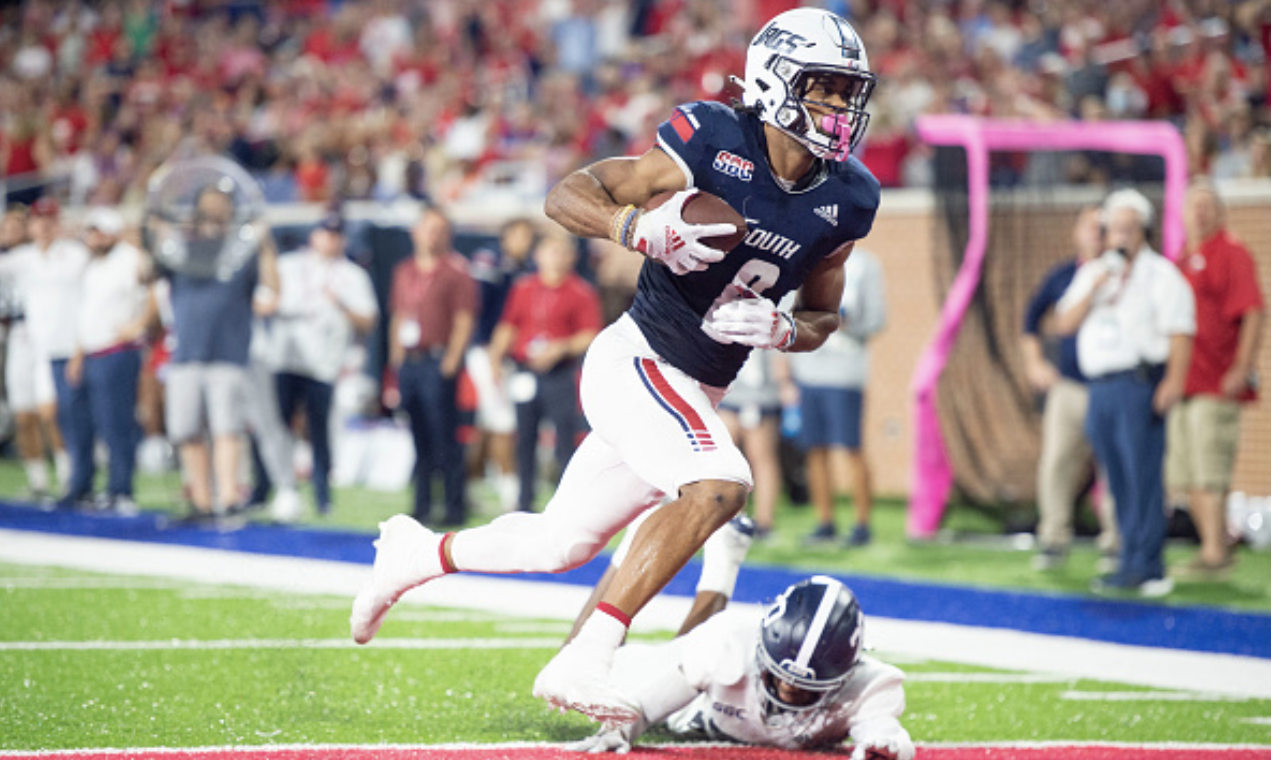 Getty Images: So. Alabama’s Jalen Tolbert could be the WR needed to round out the Eagles pass catching corps

The former South Alabama Jaguar reeled in 82 receptions for 1,474 and eight touchdowns last season after totaling 64 catches for 1,085 yards and eight touchdowns in 2020. At 6-foot-1, 194 pounds, Tolbert would give the Eagles some much-needed size on the perimeter, and his innate body control, contested-catch ability, and ball-tracking prowess makes him a desirable addition to any offense, particularly one with a young quarterback. If Tolbert is on the clock at 83, the Eagles should pounce.
DiCecco 1.0 pick: Jalen Tolbert, WR, South Alabama

The Maryland product proved to be among the biggest winners at the NFL Scouting Combine, after clocking a 4.34 40-yard dash and recording a 37-inch vertical. A three-time  All-Big Ten Honorable Mention, Cross (6-1, 215) totaled 66 tackles (3.5 for loss), 3.0 sacks, three interceptions, four passes defended, and a pair of forced fumbles last season. Athletic, physical, and rangy, Cross’ game lends itself favorably to any system. Cross will serve as a special teams stalwart from Day 1, and depending on the situation, a team could see early returns defensively. Assuming the Eagles sign a free-agent safety, Cross would be an ideal candidate at 123 to bolster positional depth.
DiCecco 1.0 pick: Vernon McKinley III, S, Oregon

Strong (5-11, 205) rushed for 1,673 yards and 18 touchdowns last season for the Jackrabbits, finishing as a runner-up for the FCS Walter Payton Award. In Strong, the Eagles would be adding a dynamic home-run hitter with excellent short-area quickness. Sparsely utilized in the passing game at SDSU, but that should change at the next level. With so many questions surrounding the team’s long-term landscape at the position, it makes sense to add an explosive playmaker to the room when you have the chance.
DiCecco 1.0 pick: Sincere McCormick, RB, Texas-San Antonio

Apart from Dallas Goedert, the Eagles’ underwhelming tight end room consists of former undrafted free agent Jack Stoll, veteran journeyman Richard Rodgers, and a rehabilitating Tyree Jackson (ACL). Kolar (6-6, 255) might be a work in progress as a blocker and doesn’t possess all-world athleticism, but the former Cyclone provides a wide catch radius, contested-catch and red-zone upside, and toughness to compete for the football in traffic. The redshirt senior thrived as a go-to target last season, corralling 62 receptions for 756 yards and six touchdowns. Pairing Kolar with Goedert in 12-personnel looks would present daunting mismatches for the opposition.
DiCecco 1.0 pick: Jesse Luketa, OLB, Penn State

The Eagles capitalize on a particularly deep crop of pass rushers on Day 3. Malone (6-4, 240) produced 94 tackles, 9.0 sacks, and four forced fumbles for the Hilltoppers in 2021, parlaying eye-popping production into an invitation to the 2022 Reese’s Senior Bowl. While his skill-set needs refining, Malone offers the requisite length, fluidity, and first-step urgency that typically translates. Depending on system and usage, Malone might need to pack on another 20 pounds to his frame, but the upside is intriguing.
DiCecco 1.0 pick: Akyleb Evans, CB, Missouri

Just like they opened the draft, the Eagles finish strong by snapping up another Georgia prospect, this time on the offensive side. Shaffer (6-4, 330), who started all 15 games at left guard for the Bulldogs last season, earned AP & Coaches All-SEC Second-Team honors and has experience playing both guard positions. Powerful mauler who plays with mean streak. Shaffer would effectively contend with a host of promising linemen for a depth role in training camp.
DiCecco 1.0 pick: Jesse Luketa, OLB, Penn State