In about three months, the Eagles will be put through a crash course in critical decision-making, with three first-round picks awaiting in the 2022 NFL Draft.

These decisions could ultimately shape the franchise for the foreseeable future, so I spent some time assessing the roster and constructing the first edition of our “DiCecco Mock Draft 1.0.” 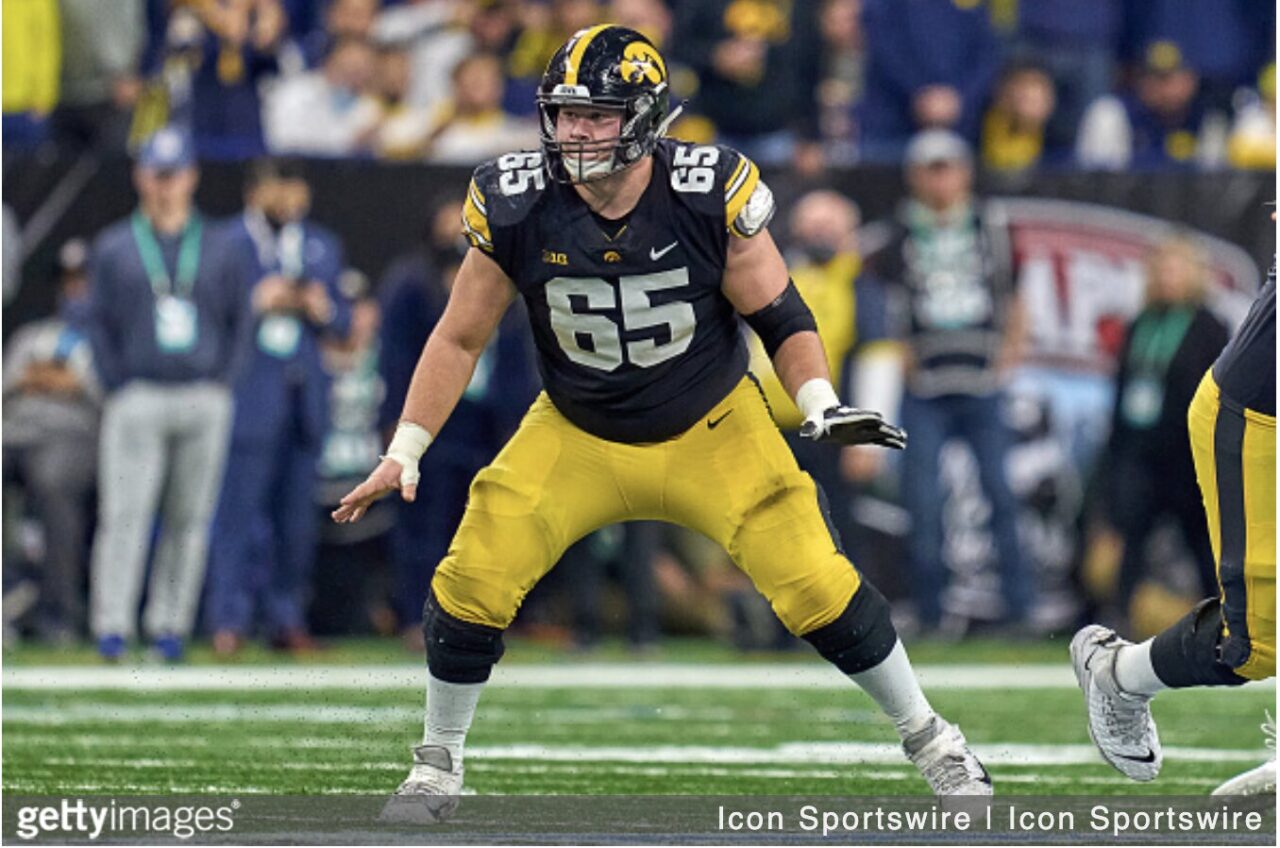 With Jason Kelce on the back nine of his career, and the current in-house replacement options either underwhelming or entrenched elsewhere, this feels like a spot where the team addresses the trenches again and adds a blue-chip center to figure into a youth movement that already includes guard Landon Dickerson and tackle Jordan Mailata. At 6-foot-3, 290 pounds, Linderbaum fits the Kelce mold, and in many ways, his way of playing the game is eerily reminiscent of the aforementioned Kelce. The former Hawkeye is a high-IQ player who possesses All-Pro upside. Provided George Karlaftis is off the board, I think they lean towards Linderbaum.

Given the Eagles’ longstanding history of fortifying the trenches, it’s safe to assume one of the early picks will be dedicated to shoring up their undermanned defensive line. With Derek Barnett and Ryan Kerrigan primed to become free agents, there is an urgent need at defensive end. At 6-foot-5, 275-pounds, Walker offers inside-outside versatility, though I suspect he’ll spend a majority of his time rushing off the edge. Still, his frame suggests he could effectively carry more weight to play the interior if asked. While the Eagles will likely miss out on Purdue’s George Karlaftis unless they move up, Walker is no small consolation. Walker is a quick-twitch pass-rusher with an explosive burst off the line and active hands. He does an excellent job of converting speed-to-power. There’s a lot to like about the Georgia pass-rusher and he should thrive opposite Brandon Graham and with Josh Sweat. Between Walker and last year’s third-round pick, Milton Williams, the Eagles are slowly rebuilding the line with potential game-wreckers.

Darius Slay performed at an All-Pro level last season, but the veteran cornerback just turned 31 years old. Steven Nelson, a late free-agent addition last summer and 16-game starter, is slated to hit the free agent market once again, potentially leaving Avonte Maddox and Zech McPhearson to round out the depth chart behind Slay. Landing McCreary gives the Eagles a Day 1 starter opposite Slay and another long, perimeter cornerback with supreme athleticism and fluid change-of-direction. The former Auburn Tiger logged 49 tackles (2.0 for loss), 1.0 sack, and two interceptions last season. I think cornerback could/should be a priority with one of the premium picks, where players such as McCreary, Trent McDuffie – or even Clemson’s Andrew Booth – could be available. 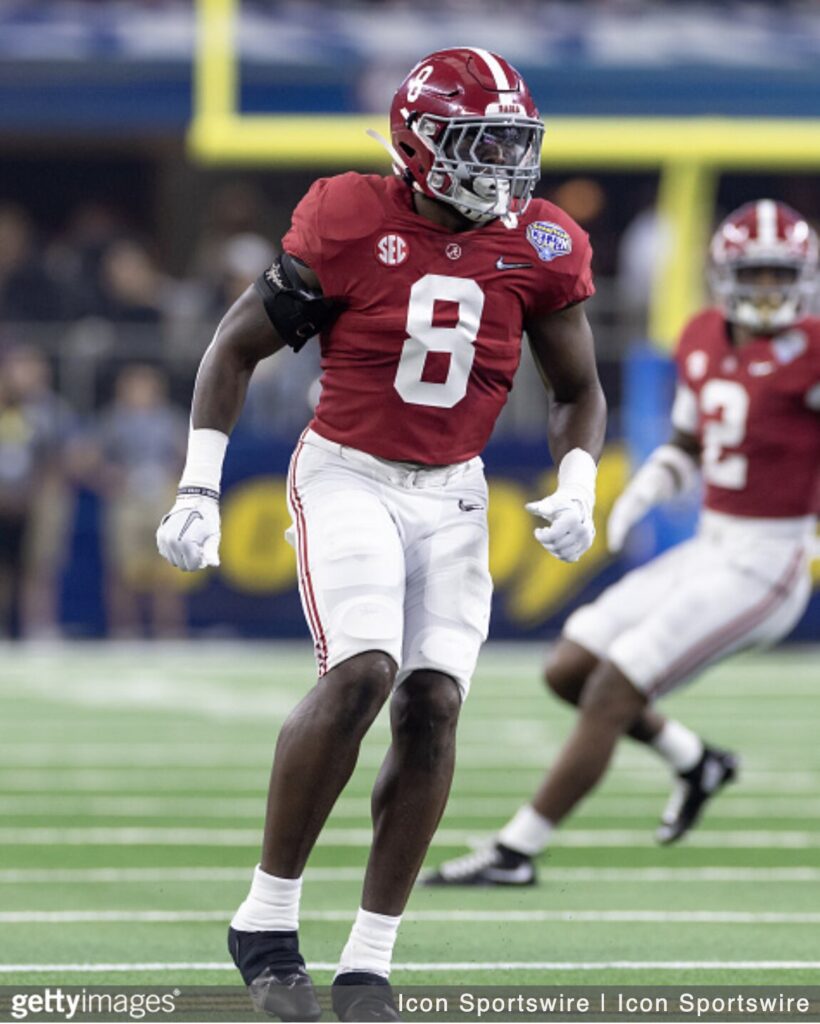 Well, it wasn’t the first round, but the Eagles still invest premium draft capital at the linebacker position, at least in this version. A case could have certainly been made for Devin Lloyd at 19, but to me, the drop-off at cornerback was too substantial. Nevertheless, the Eagles land a plug-and-play starter in Harris – a three-year starter for the Alabama Crimson Tide. Harris, 6-foot-2, 232 pounds, is an uber-athletic second-level defender with the versatility to play all three linebacker spots. With the way the league is trending, adding a player like Harris to the lineup effectively eliminates the conundrum of conjuring a scheme to defend dynamic tight ends and running backs. While it’s inconceivable to think the Eagles can revamp its entire position group in one offseason, Harris and T.J. Edwards would represent a significant upgrade and allow flexibility for the defensive coordinator. The Eagles don’t land Lloyd or Dean, but add a three-down linebacker with a specialty in coverage acumen.

Tolbert has been one of my favorite receivers in the nation for a couple seasons now, but the secret is out after another banner season. The former Jackrabbit reeled in 82 receptions for 1,474 and eight touchdowns last season after totaling 64 catches for 1,085 yards and eight touchdowns in 2020. At 6-foot-3, 190 pounds, Tolbert would give the Eagles some much-needed size on the perimeter, and his innate body control, contested-catch ability, and ball-tracking prowess makes him a desirable addition to any offense, particularly one with a young quarterback. As a route-runner, Tolbert is a fluid mover who gets in and out of breaks with little wasted movement. Tolbert has the potential to become what the Eagles believed they were getting in 2019 second rounder J.J. Arcega-Whiteside, with Tolbert being a definitively more explosive prospect.

The Eagles finally add a safety, and stumble on terrific positional value in McKinley here at No. 120. The 5-foot-11, 194-pound safety burst onto the scene this season, recording 77 tackles (1.0 for loss), six passes defended, and six interceptions. He was also a finalist for the Jim Thorpe Award as the top defensive back in college football. The ball production is sure to raise some eyebrows, but McKinley has truly evolved into a well-rounded defensive back. His short-area quickness, closing speed, and innate football IQ figures to translate seamlessly to the next level. With 2021 starters Rodney McLeod and Anthony Harris set to become unrestricted free agents in March, the case could be made to add two safeties to go along with Marcus Epps and K’Von Wallace.

In a perfect world, McCormick (5-9, 205) would be an ideal complement to Miles Sanders. While McCormick’s build suggests redundancy at a position that already has Sanders, Boston Scott, and Kenny Gainwell, his three years of film at UTSA debunks that notion. McCormick is a tough inside runner who demonstrates terrific contact balance working through traffic, has a nose for the end zone, and adds some juice to the backfield. In his three years at UTSA, McCormick has combined for 3,929 rushing yards and 34 touchdowns on 725 carries, while adding 66 receptions for 509 yards and a touchdown. Beyond Sanders, only Gainwell is assured a roster spot in 2022. I’d expect McCormick to come right in and usurp Jordan Howard as the team’s No. 2 running back.

Perhaps the league’s most underwhelming linebacking corps a season ago, the Eagles add another reinforcement to infuse a lifeless position group. Luketa, a throwback second-level defender who wins with hand usage, tenacity, and instincts, offers inside-outside versatility. At 6-foot-3, 247 pounds, Luketa instantly becomes the team’s most imposing linebacker. A two-time captain at Penn State, Luketa has also exhibited outstanding leadership qualities and could conceivably garner consideration as special teams captain as a rookie. Nothing overly flashy about his game – and his coverage skills will need work — but Luketa personifies effort and leadership while playing the game in a vicious manner. Last season, Luketa registered 61 tackles (8.5 for loss), five quarterback hits, an interception, and a half-sack. 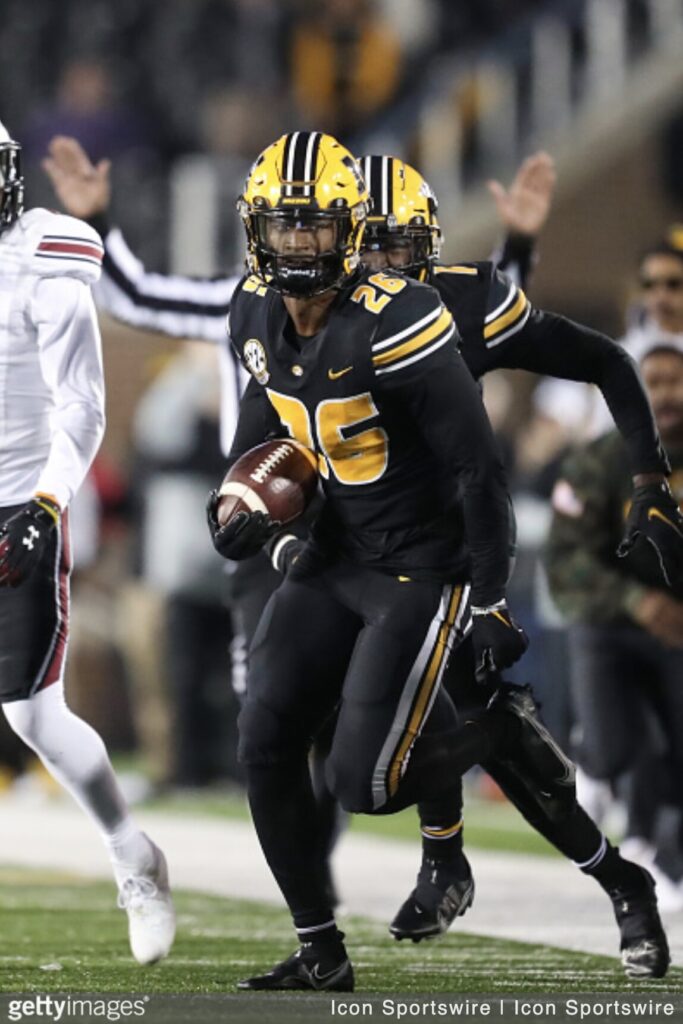 Evans, 6-foot-2, 198 pounds, successfully proved he could compete on the SEC level last season, after spending four seasons at Tulsa. A physical perimeter defender, Evans compiled 28 tackles, six passes defended, an interception, and two forced fumbles last season for the Tigers. While his length, physicality, and aggressive mentality can re-route receivers and disrupt timing, it can also work against him. Evans will need to refine his game to survive at the pro level, but teams will be enticed by his physical traits and football intellect. Selecting Evans here would give the Eagles more length at the position and someone to challenge second-year cornerback Zech McPhearson for a role.

Last season, the Eagles added fellow Coastal Carolina edge rusher Tarron Jackson on Day 3. This year, I have them double-dipping at the position and snapping up his former teammate, Jeffrey Gunter, to bolster depth. Gunter, a compactly built, 6-foot-4, 260-pound prospect, won’t overwhelm with intriguing athletic traits or length. However, Gunter typically wins with power and leverage, and his most glaring proficiency is his ability to set the edge against the run. He’ll need to add more size to his frame for long-term sustainability, but Gunter has enough tools to see the field as a rookie. Over the past three seasons, Gunter has accumulated 35 tackles for loss, 17 sacks, and nine forced fumbles for the Chanticleers.

At 6-foot-3, 199 pounds, Monday offers the length and versatility to thrive in any scheme with improved fluidity and range in coverage. While Monday doesn’t boast prototypical size for the position, he plays the game with an aggressive, downhill mentality. He’s at his best attacking the line of scrimmage, but with some refinement, Monday could develop into a quality rotational safety and should become a core special teamer almost immediately. 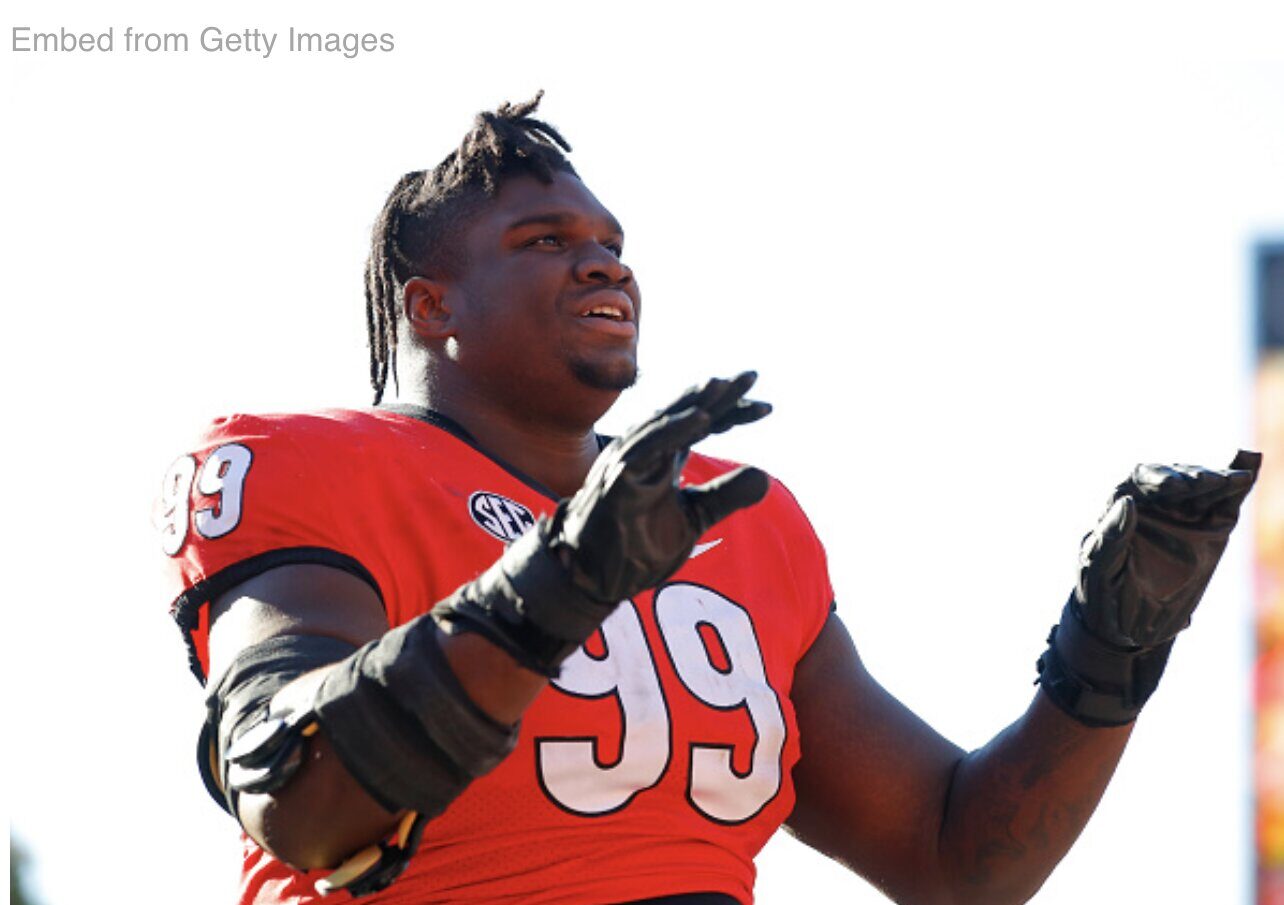 With the NFL Draft merely hours away, I constructed one final mock draft. You can look here for version 1.0 and version 2.0 of the Andrew DiCecco mock drafts. Let’s get it started: No. 15: Jordan Davis, DT, Georgia Despite posting superhuman testing numbers at the NFL Scouting Combine, Jordan Davis (6-6, 341) is somewhat… 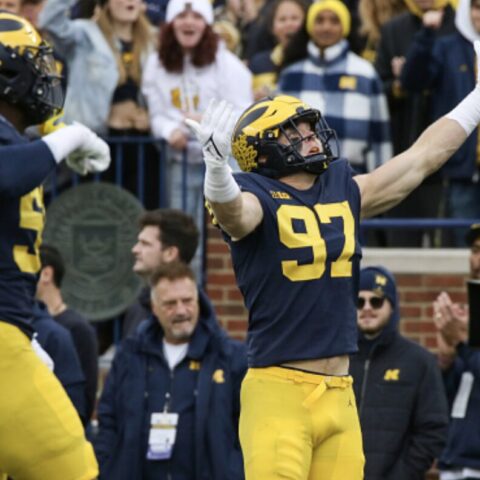 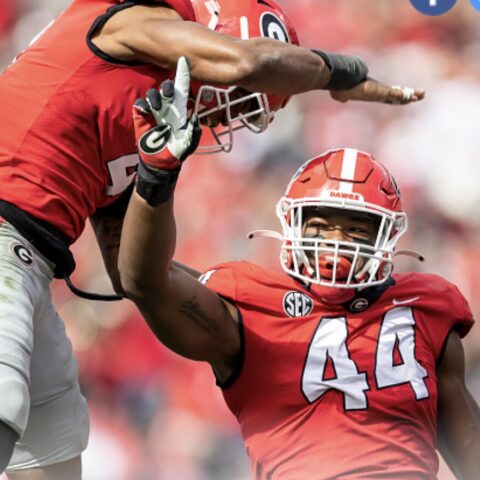