PHILADELPHIA – Frigid temperatures swirling over Lincoln Financial Field appeared to appropriately foreshadow an impending battle royale between the Eagles and Titans to what was to follow.

Despite early jitters, the Eagles managed to pull away convincingly, cruising to a 35-10 victory over the AFC South leaders.

A slow-moving first-half marred by penalties didn’t deter the Eagles from rolling up 300 yards of offense – 268 of them through the air – and double the Titans’ output.

After churning out 363 yards on the ground against the Packers one week earlier, the running game took a back seat in exchange for an explosive aerial attack, with Jalen Hurts completing 18-of-25 pass attempts for 268 yards and two touchdowns. Wide receivers DeVonta Smith and A.J. Brown each caught deep touchdowns.

Hurts finished 29-of-39 for 380 yards and three touchdowns (130.3 quarterback rating), giving him 20 this season, while a swarming Eagles defense pounced on a hapless Titans offensive line, producing six sacks, including two from Josh Sweat. 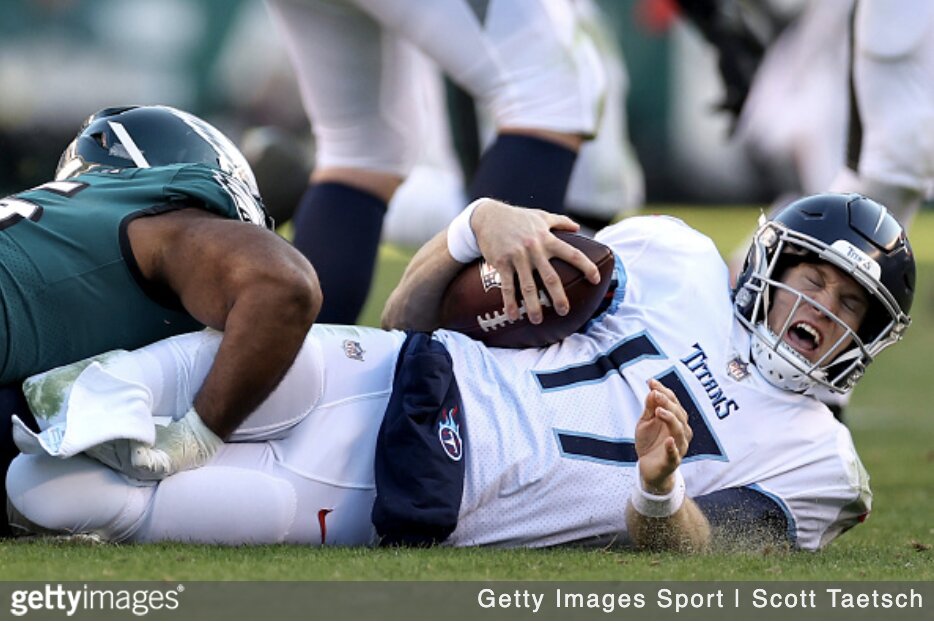 The Eagles defense battered Titans QB Ryan Tannehill in a 35-10 win over Tennessee at the Linc.

Let’s get on with some observations:

1. The Eagles’ offense struggled out of the gate, committing a pair of penalties on the first three plays of the drive, but ultimately recovered to initiate a 7-play, 75-yard scoring drive which culminated in a 34-yard touchdown connection from Jalen Hurts to DeVonta Smith. While many of the storylines centered around a presumed A.J. Brown-heavy game script, it was Smith who shouldered much of the load, snaring three receptions for 59 yards. Tennessee entered Week 13 allowing 266 passing yards per game – 31st in the NFL – so encouraging to see a pass-dominant opening script.

2. The infractions continued on the second defensive series, when Josh Sweat committed an offsides on a 3rd-and-4 to afford the Titans a fresh set of downs. Tennessee converted a 4th-and-7 courtesy of a 10-yard scamper from quarterback Ryan Tannehill en route to a 10-play, 66-yard drive capped by a 26-yard touchdown catch from rookie wide receiver Treylon Burk, who withstood a violent collision from safety Marcus Epps to complete the play. The Eagles afforded an inferior opponent plus-opportunities, committing six penalties in the opening quarter for 40 yards. Not good.

3. After a few weeks of battling through an ankle tweak, illness, and a pair of untimely fumbles, it was good to see the Jalen Hurts-A.J. Brown matinee spring into action for the first time since the Week 8 rout of the Steelers. At full strength, Brown is among the league’s best and adds an entirely different dimension to the offense.

4. A maligned special teams unit demonstrated a sorely needed take-no-prisoners mentality and were markedly more disciplined in coverage. Boston Scott breathed new life into the kick-return unit, while Britain Covey had his best game as a pro returning punts, producing 105 yards on six punt returns (17.5 per return) – including a 27-yarder in the third quarter. Linebacker Christian Elliss – elevated Saturday from the practice squad – stopped Titans punt returner C.J. Board in his tracks with a big hit. Punter Aaryn Siposs, who has rebounded in recent weeks, booted five times for 215 yards, including pinning one inside the 20.

5. Hurts has developed into an elite-level deep ball thrower, as evident on the 34-yard touchdown to DeVonta Smith and the 40-yard touchdown strike to A.J. Brown that was negated. His deep-ball prowess, coupled with improved decision-making, have catalyzed Hurts from upside-laden starter to MVP candidate. At the break, Hurts completed 18-of-25 pass attempts for 268 yards and two touchdowns (133.4 QB rating).

6. Despite the return of Titans center Ben Jones, who missed the past two games due to a concussion, the Eagles were able to exploit a vulnerable Tennessee offensive line. Josh Sweat’s 2.0 sacks led the sack brigade, while Javon Hargrave (1.0), Brandon Graham (1.0), Fletcher Cox (1.0), and Haasson Reddick (1.0) each added to the total. Good to see the well-compensated Eagles defensive front – one that will be counted on heavily down the stretch and postseason – feast in a favorable matchup.

7. This week showcased the glaring disparity between the Packers and Titans from a defensive standpoint. After rolling up 363 rushing yards a week ago, the Eagles struggled to establish any traction on the ground against a stingy Titans run defense, with Miles Sanders and Kenny Gainwell leading the way with 13 yards apiece.

8. While the Titans became one-dimensional due to game script, one would be remiss not to acknowledge the job the Eagles run defense did in bottling up the NFL’s second-leading rusher, Derrick Henry, who averaged 95.3 yards per game entering this matchup. He mustered only 30 yards on 11 carries. Linval Joseph, who has provided early returns, got the start at nose tackle and shared the field with Jordan Davis for a handful of snaps. The Eagles run defense is quickly progressing from a weakness to a strength at a critical point in the season.

9. Hurts does a great job in facilitating the ball to his full gamut of weapons, this time involving nine different receiving options in Sunday’s blowout win.

10. A.J. Brown and DeVonta Smith combined for 18 targets on Sunday, which amounted to 13 catches for 221 yards and three touchdowns. While it was encouraging to see the team’s top two pass targets find success and open things up offensively, the Eagles continue to demonstrate their ability to win in a multitude of ways.