The Eagles played what appeared to be their most complete game of the season Sunday in Denver and continued its road success.

On the latest Inside The Birds podcast, Geoff Mosher and Adam Caplan gave their takeaways from the 30-13 win over the Broncos at Empower Field at Mile High. 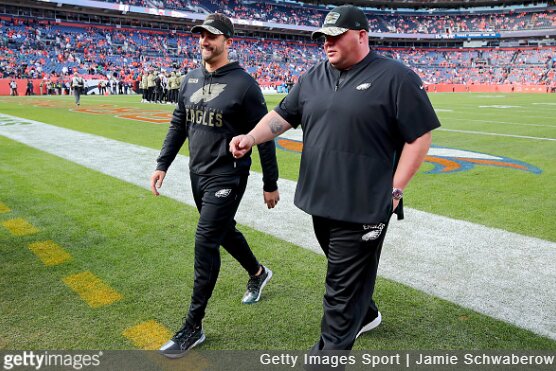 Adam Caplan: “I know the numbers aren’t eye-popping, that’s not the point. He only had to throw the ball 23 times because they were so good at offense by running football. He made some great throws in this game. The Arizona game last year, it was more spectacular, more yardage, more big plays but this was under control. The other thing that’s very underrated and I want to see what the coaches tape looks like, just from TV and slowing it down, there were easily five throws where the pocket was muddied and he still completed it. That is super impressive for a guy who is not 6-foot-5.”

Geoff Mosher: “Dallas Goedert went out and the fact that they were able to continue to move the chains really was a testament to how well Hurts was playing and how well they were running the ball. Hopefully he’ll be back for the Saints game, we’ll have to see, but this team really does have a lack of a No. 2 target when a guy like Goedert goes out. They’re really … nickel-and -diming, throwing to running backs a little bit, but I mean between Quez [Watkins] and Jalen Reagor I think just three or four catches. So I don’t want to call that smoke and mirrors, but they’re going to have to figure out as this season goes along, and we’ve talked about this anyway, they’ve got to figure out some ways to get guys the football who need the football. When a guy like Goedert goes out or Heaven forbid Devonta Smith has to go out for a game or a half or something. They have to be able to move the chains through the air and get important catches from guys not named Devonta Smith or Dallas Goedert.”

Caplan: “Don’t forget, we said before the game the Broncos were out three offensive linemen. They were without three guys, both tackles and the right guard. They definitely had the better of it. Did they get a ton of pressure on [Teddy] Bridgewater? No, but they got enough and they won. The Eagles’ D-Line won versus the Broncos’ O-Line.”

Mosher: “[Javon] Hargrave was really the one who caused the [Derek] Barnett sack. He pushed the center [Lloyd Cushenberry] and drove him back almost right into [Teddy] Bridgewater on that play. We had been talking about how it’s been a while since we heard Hargrave’s name after that really really hot start. So that was good to me.”

Mosher: “The big news this week will be Miles Sanders, if he’s able to come back and what kind of role he’s going to play in the offense going forward. This man has to be licking his chops to get into this offense now. If anybody really thinks that the coaching staff hates Miles Sanders and they’re gonna start throwing the ball around now so they don’t have to give it to him, they’re crazy. They’ve made the adjustments they’ve needed to make. The one thing that we might see more from this running game now is the real explosion to it with Miles Sanders being able to see those holes and you might see some home run plays instead of the 80-yard marches.”