The Philadelphia Eagles are moving on to the NFC Championship.

The Birds recaptured their early season dominance as they took down the New York Giants, 38-7, in a game that was controlled from the opening snap.

On “Inside The Birds Postgame Live,” Adam Caplan and Geoff Mosher were joined by Eagles Hall of Fame offensive tackle Tra Thomas to break down the NFC Divisional Round win. 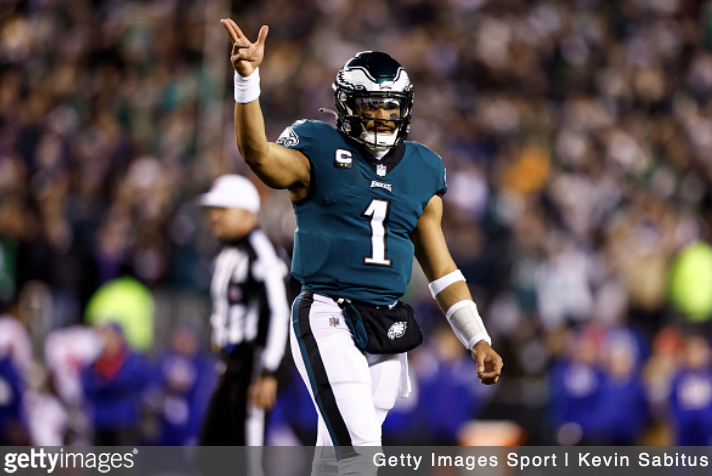 Jalen Hurts returned to form in the divisional round matchup

Tra Thomas: “This was showing total dominance. The offensive line did a really good job of getting running backs up to the second level. When you can run the ball, that’s when you’re operating in Coach (Jeff) Stoutland’s wheelhouse. Every run play is designed to get that running back to the safety. When this offense can do that, there’s no one that can stop them.”

Geoff Mosher: “I thought an interesting wrinkle that may have gone overlooked but had a tangible impact on the game was that Zach Pascal played a lot more slot reps in 11 personnel than Quez Watkins. While he does not give you an explosive element like Quez, I thought his blocking was good.”

Thomas: “Pascal seems like he has a little bit more size on him. He doesn’t have speed like Quez, but he’s a bigger body guy. You go into this gameplan knowing we’re not going to go out here and lean on Jalen Hurts too much. You want to be able to run the ball, you’re going to need your receivers to be physical and get some of those blocking plays down the field. Pascal definitely fits that mold.”

Adam Caplan: “It seemed like this is the most Pascal has played. He was in there very early. He was in there to block and it worked. They ran the heck out of it. The double teams were great. Did you notice how big the holes were? These were college holes for the guys to run through. They made Dexter Lawrence look invisible.”

Mosher: “I thought Jalen Hurts looked pretty good. There was good torque on his throws. He did play a little bit carefully, which is fine, that’s what you want him to do. He threw the ball out of bounds instead of trying to make something happen at times. But in general, I think you’d be encouraged by what you saw.”

Caplan: “There’s no question about it. I loved the way he looked in the first few drives: seven for seven with the two scores. He threw it very crisp.”

Thomas: “One of the things about Jalen Hurts that I caught was that last 3rd-and-2, where he kept it. It seemed like he felt it a little bit on that, because he didn’t keep it anymore after that. He just kept handing it off, keep the ball out of his hands so he can let the running backs do their thing. That was the only time I thought he may have felt his shoulder a little bit.”

Mosher: “There were a couple of times earlier on that we saw Lane wince or put his hand near his midsection, but he made it through the game, which is a huge thing.”

Thomas: “I thought he did really well and the game plan helped him as well. When you know that you have a lineman that may still be trying to recover, then you run the ball, and throw some of those play actions in there to keep the ball moving, so that you don’t put him in those 3rd-and-10 situations where he has to sit back and punch a defensive end all of the time. Just looking at the way he played with this game plan, it worked in his favor and gives him another week to get himself together.”

Mosher: “You saw Haason Reddick set the tone right from the start. Two sacks, had the third-down sack where he just clean beat Evan Neal, and then the fourth-down sack was on a stunt. It wasn’t something different, they have stunted with him before, but it was nice that they were not stagnant. Reddick has given this team all sorts of issues.”

Thomas: “Everybody gets on Gannon. I know he’s a low-hanging fruit, but when you have a front that can get after it without blitzing, why? Everybody just wants to see a blitz, even if you get burned off it, but why? If you have a secondary that can go out and play coverage and let your front four go out there and eat, let them eat.”

Thomas: “One of the things that they’re doing a really good job of when it comes to the four or five that are rushing and when they run stunts: for the stunts to work, your defensive tackle has to be really disciplined because he’s the one that has to take on the guard. You’ve seen so many times where, whoever that 3-technique is, rushes up field, occupies the guard, ties up the tackle, and now you have Reddick or (Josh Sweat) coming right down the middle of the field with no one there to block. These guys are running it to perfection.”

Caplan: “Another important stat is they had six passes defended, which means they were reading their keys well, in the right spot. Reed Blankenship was in early, he played a ton. I know that they played a lot of nickel because they got up big early, so he was going to play more and C.J. Gardner Johnson was in the slot, but that was an impressive game overall.”

Thomas: “Whenever you see a team have all of these sacks, the first thing you should think about is how good that secondary is. It goes hand in hand. I always say if you have a team that has a lot of sacks, that secondary is an animal. That’s one of the things that you see with the team. The secondary is second to none, and that’s why they were able to finish the season with 70 sacks.”

– Benjamin Paul is a staff writer for InsideTheBirds.com.
Listen to the latest “Inside The Birds” podcast featuring Adam Caplan and Geoff Mosher: