The Eagles on Saturday host the NFC East-rival New York Giants for the second time in two weeks in the divisional round of the NFL playoffs for an 8:15 p.m. kickoff in a bid to advance to the conference championship.

The Eagles, who finished tied for a league-best 14-3 record in the regular season, return from a bye week slumber which afforded invaluable preservation and recovery opportunities ahead of what they hope is a deep postseason run.

An ostensibly confident Brian Daboll-coached Giants team, fresh off an upset of the Vikings at U.S. Bank Stadium in the Super Wild Card round, comes to the Linc trying to flip the script from an 0-2 regular-season record against the Giants. They haven’t won at the Linc since the 2013 season.

Let’s take a look at four X factors poised to impact Saturday’s divisional round clash at the Linc: 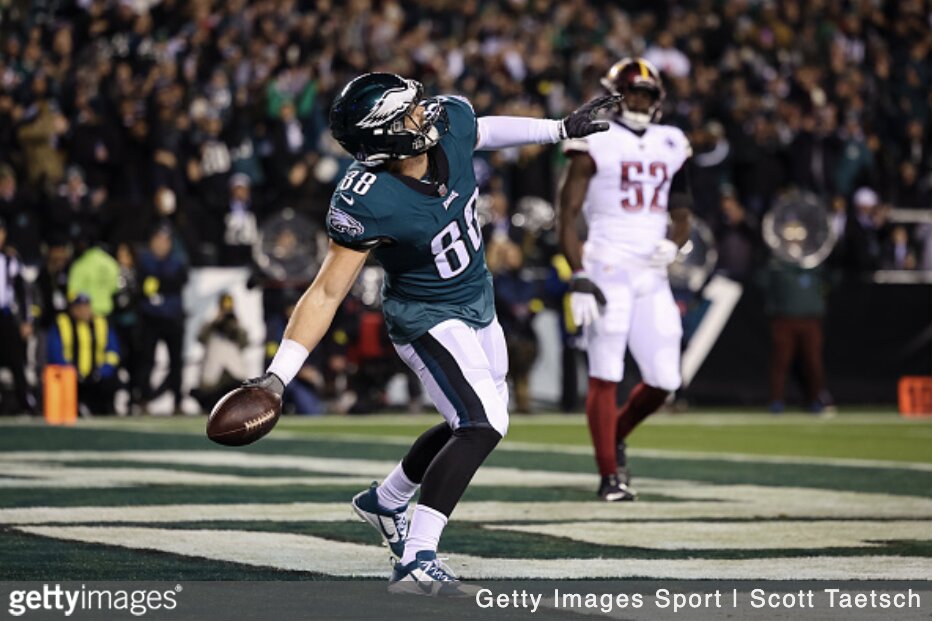 TE Dallas Goedert: Goedert missed the Week 14 matchup with a shoulder injury and was sparsely utilized in the season finale, but Saturday night’s showdown projects to be a favorable matchup for the dynamic tight end’s return to form. In what appeared to be a tactical ploy to limit explosive plays, the Giants on Sunday surrendered a game-high 10 catches for 129 yards to Vikings tight end T.J. Hockenson. In exchange, the Vikings’ top two wideouts – Justin Jefferson and Adam Thielen – were largely neutralized, combining for just 97 receiving yards. While I fully expect a diversified game plan from Eagles offensive coordinator Shane Steichen, I also think Goedert – the team’s most effective red zone option – should be this week’s focal point to exploit the soft middle and present some easy completions to settle in Jalen Hurts. It could manifest in the form of a screen or a series of intermediary connections early, but I anticipate the Hurts-Goedert connection to factor prominently into the game plan, providing Hurts with a safety valve and red-zone mismatch.

Haason Reddick: Reddick’s evening could be further enhanced by the return of Josh Sweat, who rejoins a lethal Eagles defensive front after missing the season finale with a neck injury, though the former’s impact was already expected. In the first matchup between these NFC East foes, the 28-year-old pass rusher registered a sack and a quarterback hit on Daniel Jones, reprising his weekly role as the remarkably steady dominant force flashing off the edge. The Vikings managed to corral Jones three times in the Wild Card round – in addition to landing four quarterback hits – and I foresee the Eagles’ pass-rush conglomerate accounting for five or six sacks. In Reddick’s case, I envision not only a Jones takedown from him, but also a crucial forced fumble, adding to his league-high of five this season. While defensive coordinator Jonathan Gannon might initially employ a cautious approach to account for Jones’ evasiveness outside the pocket and improvisation, I suspect he’ll eventually turn up the heat on the Giants’ signal-caller, largely resembling the Week 14 sack frenzy.

WR Isaiah Hodgins: Claimed off waivers via the Bills in early November, Hodgins has been a remarkable story of development for the Giants, accumulating 351 receiving yards and four touchdowns on 33 receptions in eight regular-season games. The 2020 sixth-round pick led all Giants in targets (9), receptions (8), and yards (105) in the team’s upset last week. Hodgins also found the end zone against the Eagles on Dec. 11. With Hodgins’ counterpart, Darius Slayton, occupying the role of vertical shot threat for a limited Giants receiving corps, the lumbering 6-foot-4, 210-pound Hodgins serves as the team’s prototypical possession wideout, showcasing sufficient body control and physicality at the catch point. His ability to win 50-50 balls compensates for the Giants’ lack of explosion in the passing game. Jones’ confidence in Hodgins growns as the third-year receiver evolves within the offense.

S Xavier McKinney: The Giants were without their defensive captain when these teams met in Week 14 – he was activated on New Year’s Eve – but it didn’t take long for McKinney to reacclimate. A tone-setting centerfielder with a multifaceted skill set, McKinney serves as the proverbial heartbeat of the Giants’ defense. Defensive coordinator Wink Martindale’s attack-style scheme functions most efficiently with McKinney patrolling the back end. Hurts feasted on the Julian Love-Jason Pinnock safety tandem in the first matchup, but McKinney – briefly a teammate of Hurts’ at Alabama – presents a unique chess match that must be taken into account. While the Eagles’ quarterback has generally eluded turnovers and kept the football out of harm’s way, Hurts will need to be mindful of McKinney’s whereabouts, not only on the back end, but also when he decides to tuck and run. McKinney has the capacity to alter a game on a single snap.