Not His Usual Self

The Philadelphia Eagles’ regular season concluded unevenly, as they scored a 22-16 victory over the division rival New York Giants, who rested starters.

However, the objective was met as the 14-3 Birds clinched the top seed in the NFC.

On the Week 18 edition of “Inside The Birds Postgame Live,” Adam Caplan and Geoff Mosher were joined by Eagles Hall of Fame offensive tackle Tra Thomas to discuss the team’s victory. 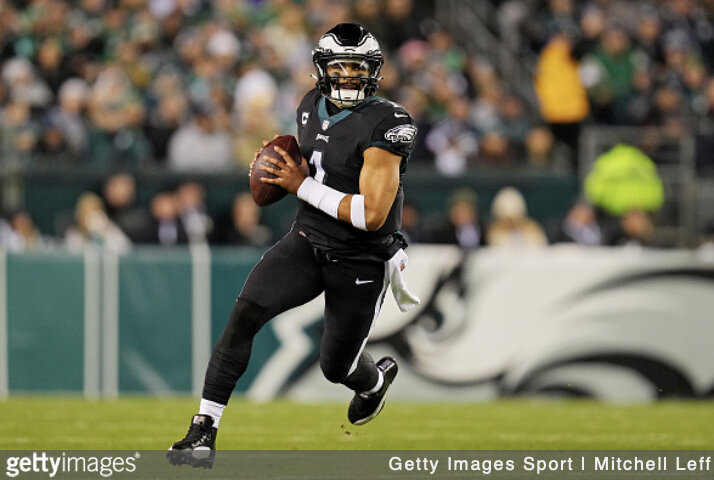 Geoff Mosher: “What this offense looked like to me was Hurts was going to try not to run and take hits. He had to scramble a few times. I thought up until the fourth quarter, on some of his throws where he was either running or trying to go downfield, it didn’t look like it had his normal torque. But I have to think that two more weeks of rest or working or rehab that you might see a more functional running and passing Jalen Hurts than you saw today.”

Tra Thomas: “Once you get into the playoffs, you have to lay it all on the line every play just so you can make it to the next week. I think that, yes you give him this week or two to get himself together and feel a lot better. It’s a shame he had to play in this game, that they had to bring him back to win this game for them, but it is what it is.”

Adam Caplan: “We have to look more into this left knee injury with (Miles) Sanders. They pulled him, and (Boston) Scott and (Kenny) Gainwell were the closers. I know they had a good enough lead where you never felt they could possibly lose, but it was kind of odd. I’m not sure what that means.”

Mosher: “There were a couple of games that stick out to me this year – Arizona and Jacksonville – where, for whatever reason, the passing game wasn’t as good as it was against Minnesota. And then they decided to ground and pound, and they did just that, and it wasn’t really all about Jalen. It doesn’t seem like they’ve had that ability to shift. The averages show you that they just have not been as prolific running the ball.”

Thomas: “Because it’s a zone-read system with a pass built over the top of it, so the offensive linemen can’t come exploding off of the ball. You can’t just put your hand out and push off the ball because if you get to the second level, you have a penalty. I think that really does affect the run game when you say the offensive line has to come off but just stay right there. Now the linebackers are going to be aggressors and moving up to them. I think the zone read concept does affect the run game because you can’t come off like you would normally.”

Caplan: “For whatever reason, Gannon decided to play [zone] coverage. I am so blown away by that. [Giants starting QB] Davis Webb had not played in years, playing with all backups. Why not make him rush himself? You didn’t do that last week, you didn’t do that this week. I have a real problem with that. I thought that was just a very bad choice.”

Mosher: “This is our biggest concern going into the postseason: when those quarterbacks go from Justin Fields, Davis Webb and Andy Dalton to Dak (Prescott), Tom Brady, or [maybe] Aaron Rodgers, this thing could get ugly because of it.”

Thomas: “I’m hoping he just wants to let his guys go eat. They were up 19-0, so front four can go eat. I would much rather, with the secondary they have, let them go ahead and cover. Get a little physical with the receivers, throw some blitzes at them a couple of times, try some stuff.”

Caplan: “He played both safety and nickel. It looked like, best on my charting, he came in the second series, played safety and then in nickel, he was definitely the slot corner. He had seven combined tackles.”

Mosher: “The guy flourished playing in this defense as a safety. He was leading the NFL in interceptions. Those were not right place, right time – he was making plays with his skill-set. You start to put that guy back at nickelback, where he did play with the Saints, but in a different defense, now you’re having him running around in man coverage because they do a lot of man-match inside. Guys like to play in zone or deep safety because they like to get their eyes on the ball and they have a chance to make a play on the ball. You’re in man, you’re running around with your back to the QB.”