The Philadelphia Eagles kicked off 2023 on the wrong foot with a 20-10 loss to the New Orleans Saints, as another sack parade and second-half defensive adjustments weren’t enough to overcome a lackluster offensive performance.

On the Week 17 edition of “Inside The Birds Postgame Live,” Adam Caplan and Geoff Mosher were joined by Eagles Hall of Fame offensive tackle Tra Thomas to discuss the team’s second consecutive defeat. 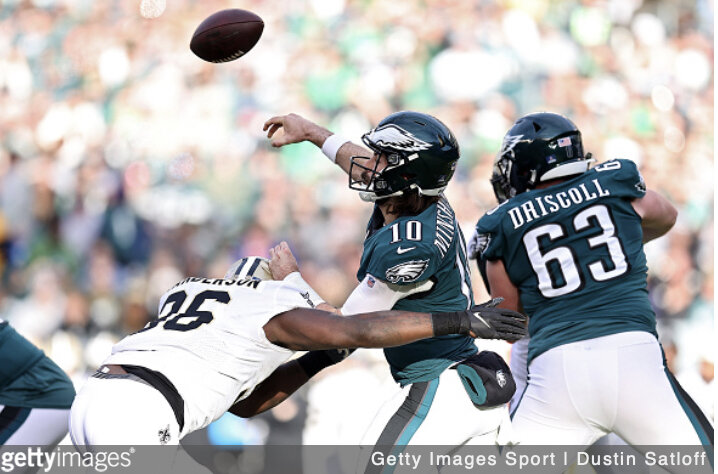 Geoff Mosher: “I felt early on in the game, even before he got hit at all, there were a couple of times where he rushed the pass. It was almost like he felt the pressure when it wasn’t there, didn’t have his feet set.”

Adam Caplan: “He just sometimes moves, it’s called perceiving pressure that’s not there. Sometimes, I don’t know if he can see over the line, he’s what we call a small six feet even. He’s a smaller-bodied guy. Here’s one of the many differences between (Jalen) Hurts and Minshew: on the 4th-and-half-a-yard, you know Hurts, because he’s so strong in the lower body, is getting that. Minshew is not very strong.”

Tra Thomas: “It seemed like he was sailing some passes. He wasn’t as sharp as he needed to be. Yeah, you made a nice throw to A.J. Brown down the sideline, you got Dallas Goedert right in the middle where you had four defenders right in there, and then there were other times where it’s 4-and-22, you’re scrambling and then you throw this pass to DeVonta Smith that damn near got his ribs taken out. If you’re not going to be able to lead us, don’t hurt us by getting some of our star players injured. It was just very frustrating to see his play.”

Thomas: “I think Kelce’s not snapping the ball on time. When you see everybody on the offensive line move and the ball is still there, Kelce didn’t snap the ball. Everybody didn’t jump, he didn’t snap the ball. In this game, you had to go silent count a couple of times. This is a home game. To me, I think there are times where he just not snap the ball when he’s supposed to, and that causes problems.”

Mosher: “Last week against the Cowboys, Jonathan Gannon played a ton of zone, got carved apart, switched to mostly man in the second half and they fared a lot better. This game, we still have to watch the All-22, it appeared to me that they started off in a lot of zone, and then second half was much tighter coverage, definitely more guys up. If you guys remember last year, the Bengals went to the Super Bowl because Lou Anarumo, their defensive coordinator, was playing one defense in the first half and then an entirely different defense in the second half. He was confusing quarterbacks because of it. I’m wondering if this is part of a bigger plan, because I can’t for the life of me understand why you would even come out playing that soft and allow that first drive. He did adjust, but after last week you would have thought, ‘Let’s come into the game and force the issue.’”

Thomas: “Why would you play any other way? You know you have the secondary that can do it, you’re front five are the best in the league right now, why not just go ahead and press, get up in their face and then go up and let your defensive line eat?”

Thomas: “He is playing really well. It’s not like he’s giving you a lot of moves, it’s just a long-arm bull rush. Because offensive tackles are sitting out there and allowing defensive ends to climb to your chest, all you can do is hop and give up ground. If you make that quarterback step up just a little bit, sack. B.G. right now is playing amazing.”

Caplan: “I love the way that they use him. He doesn’t have to play a huge amount of snaps, and it clearly works for him. The d-line gets after it, it’s pretty remarkable.”

Mosher: “If he is out for any significant amount of time, including playoff games, that is another crushing loss. Lane Johnson’s a tough loss to begin with, your best offensive lineman, but then maybe also losing your best defensive lineman. Prayers up to Josh Sweat in general that he’s OK. You see the impact Sweat has on a game, if he’s out even one playoff game, losing him could be significant.”

Caplan: “Not only is he a terrific pass rusher, he’s also a good run defender. He’s the force player. He’s been an incredible story of development, got his extension last year and has had a breakout season. They have some real serious injury concerns.”