Backs Against The Wall

PHILADELPHIA — An underwhelming start ultimately foreshadowed the Eagles’ demise Sunday against the Saints, despite their return to Lincoln Financial Field for the first time since routing the Titans nearly a month earlier.

A 15-play, 75-yard opening scoring drive – draining eight minutes, 58 seconds of clock – quickly nixed any thoughts of the Eagles easily avenging their Christmas Eve loss to the Dallas Cowboys and dashed aspirations that the Eagles would cruise to clinch their first NFC East title since 2019 and the No. 1 seed in the playoffs.

And moments before the multidimensional Taysom Hill capped the possession with a 1-yard touchdown plunge for the game’s first score, adversity struck following a 2-yard run by fullback Adam Prentice.

Eagles defensive end Josh Sweat, who teamed with Fletcher Cox to make the stop, was carted off the field after laying face down and motionless on the Lincoln Financial Field grass for several minutes.

Although Sweat had movement in all of his extremities, the Pro Bowl pass rusher was admitted to a nearby hospital for precautionary reasons. Sweat had suffered a neck injury, according to the team. 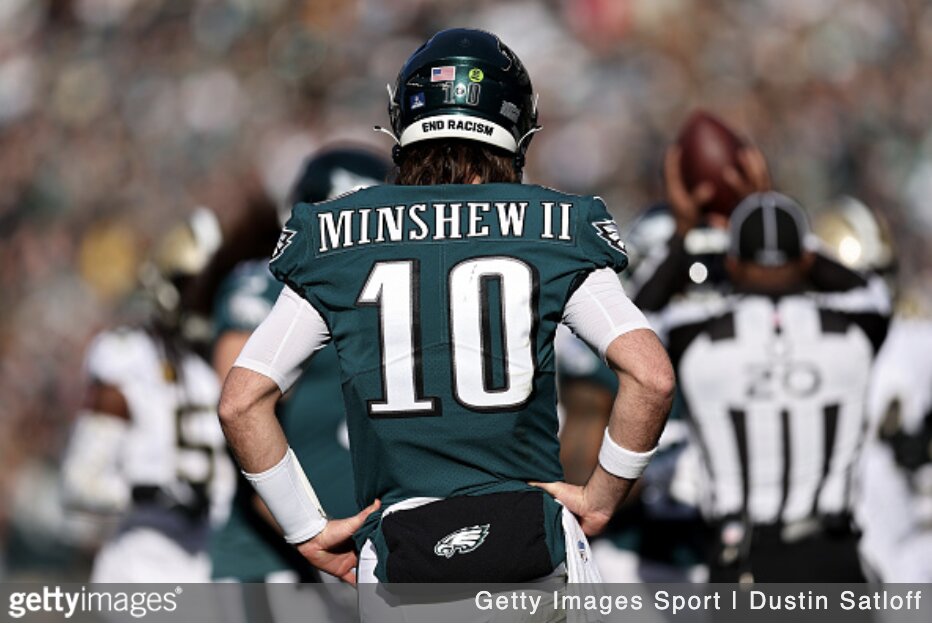 Gardner Minshew’s struggles resulted in the Eagles having just a smattering of offensive plays in the first half against the Saints.

Jonathan Gannon’s defense seemingly had no solution to thwart a middling Saints offense, allowing 247 yards and a 60-percent third-down conversion rate at the break.

The Eagles’ offense, which had rolled up 442 scrimmage yards against the Cowboys, mustered just 61 yards against New Orleans and failed to score entering the break.

The offense didn’t even yield a first down until 19 seconds remained in the second quarter.

With the exception of a handful of explosive plays, the high-flying Eagles offense remained grounded throughout – six of the eight second-half penalties were charged to the offense, halting any semblance of incremental progress – while the defense took the field in the third quarter with a renewed energy.

Linebacker T.J. Edwards set the tone, corralling wide receiver Rashid Shaheed for a one-yard loss on the first play, while Cox notched his seventh sack of the season. The Saints were held to just 42 yards in the third quarter.

The ferocity persisted through the final frame, with Brandon Graham collecting his second sack of the afternoon – 11th on the season, a new career best – and edge rusher Haason Reddick joining the sack bonanza for his second.

After surrendering 13 points over the first two quarters, Gannon’s unit kept the Saints’ offense off the scoreboard in the second half.

Their lone second-half third-down conversion didn’t come until after the two-minute warning, on a 3rd-and-3, when running back Alvin Kamara’s 16th carry went for four yards to effectively put the game on ice.

“We had to man up,” defensive tackle Linval Joseph said after the game. “At the end of the day, when you put yourself in a situation like that, you gotta figure who really wants it. Who really wants to help us and lead us. That’s the type of situation we was in. And it was just good to see guys rally out of the funk.

“Today felt a little weird to me, but I’m just glad that we was able to be better than we were in the first half. Now we just gotta get back to the drawing board and keep chipping away.”

Theoretically, a 13-point performance from your defense should be sufficient to win. Especially a performance in which the team eclipsed a 33-year-old franchise single-season record for sacks (62).

With seven more against the Saints, the total now sits at 67. Only four teams have accumulated more sacks in a single season in league history.

“We just hungry, man,” Joseph said. “We just wanna put our offense in the best position to win. When we get sacks, we get the ball back to the offense.”

Aside from a 78-yard A.J. Brown touchdown, the prolific Eagles’ offense never did find its stride on Sunday. The same offense that compiled 34 points a week ago – against a superior defense – struggled to even manufacture 10.

While complementary football has been a common thread fueling a largely dominant Eagles team through the first 17 weeks of the season, the blend of run and pass efficiency eluded the offense against the Saints.

As the regular season draws to a close, the Eagles have one more week to make their playoff path less daunting by taking care of business against the NFC East-rival New York Giants.

For a player like Graham, a veteran pillar who’s seen it all, his galvanizing words conveyed the similar mantra that speaks to the team’s connectivity.

“Stay tight and stay together,” Graham said. “Nobody said it was going to be easy. People are going to give us their best shot. We know our issues and we know what’s up. We have to stay focused on the task at hand, not get too far ahead, and live in the moment.

“I think we’ll be just fine. We have a special team and we just have to go out there and prove it every week.”